Sleepover at Timothy's by foxfan1992

It was a warm, sunny late-September afternoon. Nine-year old Friendly the fox and five-year old Timothy the raccoon were headed home from school together on their bikes. Friendly rode behind the raccoon, looking down at his friend's training wheels and smiling. As the two friends reached the little dirt path through the trees they had to take home, they stopped for a breather.

"So... what's it like being in fourth grade?" asked Timothy, curiously.

"Well... harder than being in kindergarten" Friendly answered with a chuckle. "We spend all day doing multiplication and spelling tests and stuff, we're apparantly going to tackle long division sometime next week"

"I'm good with numbers! I even know what seven plus seven is!" Timothy squeaked excitedly.

Friendly frowned a little. Timothy seemed to be better at numbers than he was, despite the raccoon being four years younger than him. Still, now he knew that Timothy was good at something, since he had been wondering what Timothy's talent really was.

"That's good, heck even I didn't know what four plus four was when I was your age" Friendly answered.

Before long, the two cubs started off home again, riding their bikes along the dirt trail through the trees. The problem with this path though was that the weak autumn sunlight didn't penetrate through the thick canopy as it would through the summer, and the recent rain had turned the path into a muddy mess. As Timothy rode his bike into the mud, his training wheels took enough load off his back tire that it couldn't get any traction and just spun helplessly, digging itself into a muddy rut.

Friendly - whose bigger bike didn't have such a problem with the mud since he didn't have training wheels, could ride through the mud with relative ease. He cautiously rode by his struggling friend and leaned his bike against a tree while he reached in his backpack for the bungy cord he carried.

"Hang on buddy, I'll tow you out" said Friendly, chuckling as he watched Timothy's stuck bike spraying mud in every direction as the raccoon kept pedaling fruitlessly. His eyes drifted to the waistband of Timothy's shorts, which had slid down a little to reveal a Lightning-McQueen Pull-up his friend was wearing under his shorts. Friendly couldn't understand why it seemed so cute and why his eyes kept drifting to it, it was just so.

"Uh... Friendly? A little help here" squeaked Timothy, trying harder to ride his bike but not even moving an inch.

"Sorry..." said the fox, attaching one end of the bungy cord to Timothy's handlebar and attaching the other end to the seatpost of his bike, under the saddle.

"Uh-huh!" squeaked the raccoon, pedaling as hard as he could.

Friendly turned the pedals on his bike and as the bungy cord went taught, Timothy's bike began to move. Without the help of Friendly and his bike, the back wheel of Timothy's bike just groaned as the rubber struggled to get any traction in the mud, but with Friendly's help the raccoon's bike began to budge, emerging from the muddy rut with a loud sucking noise.

"Thanks Friendly. I'm glad I have you to help me when I get stuck" squeaked Timothy, stopping to allow Friendly to unhook his bike from the bungy cord.

"I'm more than happy to help you. I just wish we got more time to play and have fun together" replied Friendly.

"Uh-huh" Timothy answered... "Hey, would you be interested in a sleepover tonight? Mommy said I could have you over"

"Really? I'd love that!" Friendly exclaimed, clambering on his bike again. "Come on Timothy, let's go!"

Timothy rode off in front as fast as he could, with Friendly riding along behind him.

When they reached Timothy's house, they left their bikes in the driveway and went inside.

"Um... well I did say he could..." Timothy's mom said, remembering her promise. "Alright, but we'd better let your parents know Friendly"

"Yep" said Friendly, knowing that his parents would probably start worrying if he didn't show up at home without a phone call or something to let them know where he was.

"Yay!" Timothy squeaked excitedly, running over to his friend and hugging him tightly.

"Heheheh" chuckled Friendly, picking his young friend up and patting the seat of his shorts.

"Boys, you might want to move your bikes - otherwise daddy might run them over with the car" said Timothy's mom.

"That wouldn't be good at all!" Friendly said

"No! My poor bike!" agreed Timothy, heading outside with Friendly.

Friendly picked his bike up and waited for Timothy to lead the way into the backyard. Friendly's eyes again drifted to the waistband of Timothy's shorts as the Pull-ups peeked out of them. Just how cute enough got Friendly excited in a way that he couldn't understand, to him he just found it overly adorable.

That evening, Friendly and Timothy prepared themselves for bed together. In the bathroom, they held a contest as to who could have the shiniest teeth after brushing. Unfortunately in their haste... they forgot that others may have wanted to use the bathroom too.

"You boys done in there? I need to come in" said Timothy's dad, gently knocking on the door.

"I win!" Timothy squeaked triumphantly, spitting into the sink and washing it down the drain with tap water.

"Just a sec" called Friendly, gargling for a few seconds before also spitting into the sink and washing away the residue with tap water.

"What took you boys so long?" asked Timothy's dad.

"We kinda got carried away brushing our teeth" said Friendly.

"If you spent all that time brushing your teeth, I'm surprised you didn't brush them away" chuckled Timothy's dad, entering the bathroom and closing the door behind him.

"Is it alright if you share a bed with Timothy? We were going to bring the air mattress in, but we can't find it"

"Friendly can sleep with me!" Timothy said, "He doesn't need the air mattress"

"Sleeping with Timothy will be fine" said Friendly, smiling as his friend took off his shirt and pulled his shorts down, revealing his Lightning McQueen Pull-ups.

"Alright, goodnight boys" said Timothy's mom, switching on Timothy's night-light and then closing the door behind her.

"Goodnight mom" squeaked Timothy, clambering into bed and tucking himself in.

"Make room for me" said Friendly, snuggling down beside Timothy and turning to face him.

Timothy began to trill contently and snuggled up with his friend. Friendly gently snuggled up too and put one of his paws on the seat of Timothy's Pull-ups.

Hours ticked by... the two friends were sound asleep together, and even Timothy's parents had gone to bed. For reasons unknown, Friendly awoke.

"Huh?" he said, looking at the unfamiliar room with the night light plugged in, providing the only illumination for the fox's sensitive eyes.

"Where am I?" thought the fox, when he looked down to his right and saw Timothy asleep beside him, it all clicked. He was in Timothy's bed, in Timothy's bedroom, at Timothy's house. He sighed with relief and settled down again. He reached over and gently snuggled up with his friend, putting his paw on the seat of Timothy's Pull-ups again. However, something felt a little wrong, he looked and saw that Timothy was facing away from him, so his paw wasn't on Timothy's butt, but on the other side. He nearly pulled his paw back in shock, but just as he realized this he felt Timothy's Pull-ups getting warm and soggy. His friend was wetting his Pull-ups in his sleep, and Friendly was awake and he could feel his friend's training pants soaking up the wetness as it escaped from the little raccoon seemingly unabated. Friendly didn't know what to do... should he wake his friend or should he continue to let him sleep? Would Timothy stop wetting his Pull-ups if he woke him up, or not? As he felt Timothy had stopped wetting his training pants, the raccoon squeaked a little but continued sleeping peacefully. Friendly decided it would be better to just let his friend sleep. He gave his friend a gentle lick on the cheek and snuggled up to Timothy's warm body, falling asleep beside his little raccoon friend again. 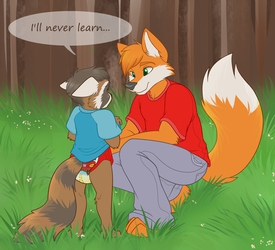 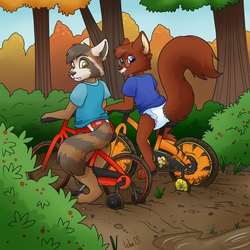 Friendly gets to sleep over at Timothy's house for the first time on a Friday night after school.

Just a little short story I wanted to write since I haven't had the time lately.