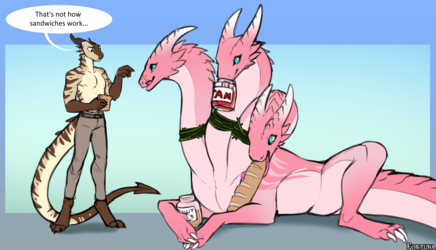 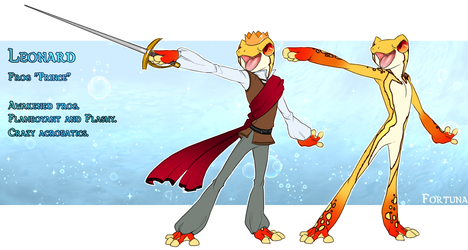 Here's the AnDragon version of one of my older characters.

Character and art by Fortuna

Description and setting by DragonTalon

INTERNAL MEMO - NOT FOR PUBLIC RELEASE!

LEAKS WILL BE PERSECUTED TO THE FULL EXTEND OF THE LAW!

With the introduction of larger, more powerful industrial AnDragon systems, the risks of equipment malfunctions has risen dramatically.

While AI safeguard system failures are still extremely rare (See: Incident report 56-FKM23) and most other situations can be resolved with our standard and enhanced FEM-DOM-Class Enforcer models, some situations require a rapid and precise use of force.

Situations involving the need to penetrate secure facilities or hardened structures require an Enforcer line capable of quickly and safely performing such duties. While the standard DOM-Alpha line of Enforcers have hardened SIM frames, enhanced structure, boosted power plants and are extremely tough, they are designed to restrain and infiltrate and are not intended for extended combat situations.

The MEA prototype was developed to fit this need, with the following unfortunate situations used as goals for her design.

( See Index H for the full list of 234 incidents that were analyzed for this report. )

The MEA prototype is designed from the feet up to handle such cases. She is equipped with a fully Strong-Interaction-Matter skeletal frame as well as much of her outer structure armor plating. Her skull is made of 100% SIM. The two major design challenges were the ability to apply extreme force both quickly, and extremely precisely.

The prototype model will be equipped with two new offensive systems utilizing the newly developed Uncharged-Meson HardLight generators (UMHL or Magma-HardLight). These systems were considered too unstable to be used in even industrial applications and were considered a failure, but have been re-purposed into weapon systems by enhancing their instability.

The enhanced HardLight generator is designed to produce solid projections capable of extreme temperatures, sharpness and rendering classical molecular bonds unstable. Blade-like extensions are capable of cutting through nearly any material (with the exception of SIM based structures) and melting cleanly through material objects of nearly any thickness. Due to the HardLight field properties, only a small amount of energy is transmitted via radiative means, and the full power is concentrated through conduction even with stellar-class levels of heat. (Executive Summary Addition: Hot blades only conduct heat to materials they touch, and will not set fire to surrounding objects. )

Her chassis and structure are 100% composed of heat resistant materials, required to support her Magma-HardLight

Magama-HardLight projections are destructive by nature and cannot be used to generate standard projections that can be touched safely. Due to size and power limitations, the addition of a secondary HardLight system is not possible. Any AnDragons equipped with such systems should be limited to emergency use only, and not be utilized for general domestic or policing duties.

Magama-HardLight particles have been incorporated into a standard plasma based fire breath projector, enabling the FEM-DOM class of AnDragons to produce a flame capable of breaking all known chemical bonds, and the ability to damage some types of non-baryonic materials. By overdriving the HardLight particle generator, a solid short lived magama may also be produced, increasing short term destructive potential.

The FEM-DOM Class Enforcers will have the ability to disable, or destroy any threat quickly and without collateral damage. Magma-HardLight based blades can pierce internal generators, sever internal data connections, remove limbs or in last case options, destroy non-SIM protected AI cores. For larger threats, MEA can cut through armor and superstructure to reach internal components and disable them, or teamed with a DOM-A Class, allow them to reach core systems to override and reprogram. In such situations, a FEM-DOM unit will submit to the DOM-A Enforcer to ensure no critical systems are damaged and the DOM-A Class is able to reach and reprogram the target.

Due to the extreme lethality of weapon systems the MEA prototype and her class contain, they will be given a strong sense of duty and obedience. Their AI cores will be fully sentient and capable, they will be strongly conditioned to follow orders to ensure they perform only the actions required of them. While DOM-A Class Enforcers are given the ability to seek out and enforce laws and infractions on their own, they occasionally stray outside their command boundaries and require correcting. Such incidents with a FEM-DOM class could easily result in loss of life and therefore are to be avoided at all costs.

The same quantum entanglement Central Authority control system that standard Enforcers has been hardwired into the FEM-DOM class as well, ensuring the ability to instantly instruct or disable individual units. (Quantum decoherence issues till limits the number of CA connections to a relatively modest number.)

A large amount of focus was placed on training and utilizing her Magma-HardLight projectors, both to ensure she does not damage herself or others. The MEA unit has shown an obsessive level of concentration on such training and is content to focus on practicing and developing her skills.

Her Q-T Crystalline Brain has been hardwired with high levels of duty and obedience. Her initial programming and training has been successful and she identifies as a military Enforcer, eager to perform her duties.

Further refinement on FEM-DOM mental programming will be required. MEA exhibits little interest in engaging in social situations, preferring to observe but not interact. While this is intended behavior, the MEA prototype seems to be confused and unsure when not following orders or performing her Enforcement duties and training. As such units will likely experience long periods of downtime between missions, this will need to be solved.

Currently we are testing interactions with MEA between other AnDragons with high levels of dominance (DOM-A Enforcers) or high levels of submission (Luxury domestic service models) with greater success. Current testing focus is on interaction with DOM-A class Enforcers. Attempts to force socialization with large groups has been met with failure.

As her combat capabilities are exceptional and only expected to improve, her mental state is of prime concern. While her built in constraints and programming should be sufficient to ensure obedience, great care should be taken to prevent any extreme personality swings. A high priority on mental stability will be needed, above and beyond the standard care in ensuring content and satisfied AnDragon production units.

We expect testing to be complete within the year, and production can begin after the required trial runs and factory tooling. Mass-production of many critical and unique components is impractical, so all units will be custom built as is the case with existing Enforcer-Class AnDragons.