The Fate of the Eaten by Fore 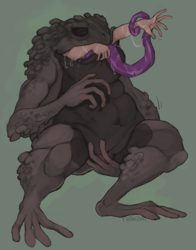 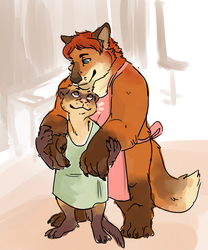 The Fate of the Eaten

Grief Eaters lips tingled with the abiding taste of his meal. The last of it settled in the broad, heavy paunch he now sported, proudly displaying weeks of slow nibbles the monstrous toad took of his human's grief. It had sated him, but his appetite always escalated to this end. They always ended up this way, eventually.

The still living flesh continued to writhe in pleasure beneath the flabby layers of pudge. The powerful workings of Grief Eaters stomach began to slowly take what little grief the human had to offer. He had been drained so thoroughly by Grief Eaters visits that there was a hole where such things were kept. So naturally, the juices his lovely plaything stewed in would take all else that was offered. The prey nestled in his belly made no protests, felt no fear nor anguish, merely whining with delight as the dim numbness began to settle in.

The damp, pliable gut barely bulged outward despite its occupant. It wobbled as Grief Eater rolled onto his side, propping his head up on his knuckles and watching the sight of that wide paunch that splayed out before him. His prey sloshed about, offering no resistance. It would bask in this odd lack of concern and worry until it eventually faded entirely.

The toad's great stomach was no place for a fleshy thing like this. Already the surface of the terrible beast's belly began to swell and churn, gurgling loudly around the human he'd claimed and devoured. He playfully lapped over the thick edges if his lips. The itch of unbridled delight, a savory emotion, clung to them. He adored this willing snack. His long fingers stroked over the slick sides of his belly, giving it a gentle pat to comfort the helpless human. Not that there was much reason to comfort a creature that felt no reason to regard the dark, dank depths of the monsters insides as unfavorable.

They always ended like this; crawling with eager smiles to a happy doom.

I figured I would take a moment to add a bit of a conclusion to my little Grief Eater character, or at least the most common conclusion to any who encounter him. I hope to get to work on some stories that aren't as vore related for folks who don't find this as pleasant as my other junk.

A delightful commission done by susieblacksheep. Her tumblr is below.