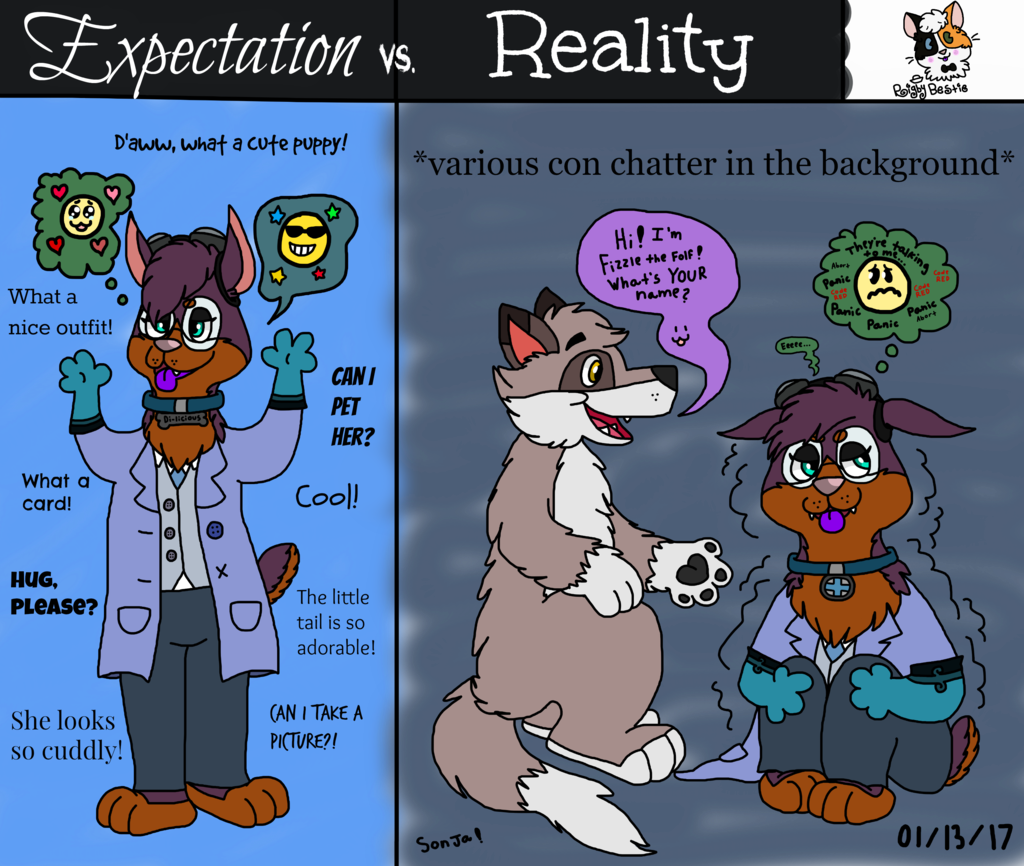 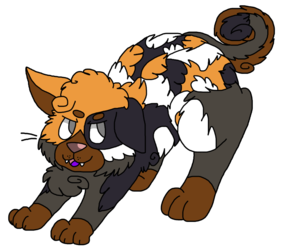 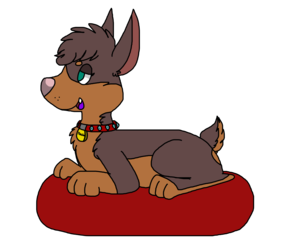 (I had to edit this because I'm a dumb when I'm sleepy and I spelled the title "Expection", which isn't a word... ^^;)
(There's also five hundred versions of this, I'm so sorry...)

So, my contribution to Friday the 13th this year is NOT something scary. Who woulda known? (And, whoops, posting it the next day because I'm slow and stalled a lot...)

If the whole joke here is unclear, let me explain.

I keep joking in my house that when I get my fursuit, I'm going to be incredibly shy in it, when Di is supposed to be relatively this cool, calm character (most of the time) and the point of fursuiting is to BECOME YOUR CHARACTER.
In the first panel, I imagine myself getting tons of attention and fame from my acting. (And, on the inside (of the suit) I'm overjoyed.)
But, in reality, I'm cowering in a corner whenever someone talks to me.
I'm such a good actor. I mean, I'm really cartoony and such, but I'm extremely shy... it's really annoying and counterproductive to my fursuiting career...
I think I keep forgetting that no one sees ME, but that they see DI. I'm scared I'm going to be judged if I don't perform well... I guess I have... Performance Anxiety? rimshot weeps
I'm just hoping I'll take on Di's personality and perform her well!
But, only if I'm not afraid to talk to other people or be embarrassed of how I'm dressed in public. I mean, I'm a giant purple and brown Doberman with giant glasses and a doctor's outfit. If I'm not bully fodder, I don't know WHAT I am. "A furry?" Yeah, that. ... HEY!

Now, I know you're wondering: "Why is Fursuit Di's colors off?" Well, because she is a fursuit after all. Fursuits, sadly, don't have the option of being whatever color they want. They have to bend to the will of the limited colors on the market. So, I picked Minky Brand Plum Alpaca Faux Fur and Fursuit Supplies' Rust Faux Fur for the colors here. This is close to how I imagine the real Fursuit Di is going to look, but I'm sure Made Fur You is going to surprise me.
I'm sure you're also curious about those huge light bluish-white circles on Fursuit Di's face. Well, those are her glasses. "But, they're blue normally???" Well, the lenses are actually CLEAR, I just color them blue for aesthetic reasons. This time, I colored them much lighter to give more of an impression that they're clear. I'm buying oversized glasses for her, because oversized items, accessories, and props are adorable on fursuits. Just ask Matrices.
Hehe... With how huge they are, they kind of remind me of The War-- has flashbacks sweats ...that's a time of my life I don't want to remember... But, yeah... they look like that guy. You know the one. ... sweats profusely breaks goes on Google to search him Awwwww... yeaaaaaah...
(Also, if you're wondering, the reason Fursuit Di is "looking away" from Fizzle is because she has "Follow-Me Eyes". It's an optical illusion that gives off the appearance that the fursuit head is constantly "watching" you, unlike normal Toony eyes, which just stare blankly ahead, like Fizzle's. At times, the Follow-Me Eyes might appear to not be looking at the person in front of them considering what angle you're at. They also tend to look like they're looking to side from the front as well. They're very unphotogenic at times.)
(If I don't stop drawing Di's nub tail where you can see it, you can't possibly see that thing from the side, oh my gooodness... Okay, who am I kidding, it's so cute, how could I hide it behind her?)

This is actually the first comic in FOREVER where I actually gave a crap about the look of it and it's one of the best comics I've made in a long time. I also want to have it be my wallpaper! I so RARELY want my art to be my wallpaper anymore! But, then again, that's probably because I always draw backgroundless doodles all of the time...

Fizzle the Folf is just a random furry character I made on the spot, to be a placeholder for whoever. They're a Fox/Wolf hybrid, because those are the most popular fursona species and I didn't know which one to pick, so why not combine them? (I say "they're", because I never decided what gender they are.) You can put yourself there, if you want. I didn't want to put a specific 'suiter there, because... well... issues. Like, copyright... or they may turn out to be a douche later. I dunno. What? People I've admired before turned out to be douches! I'm just being careful!

Apparently, according to the second panel, my name is "Eeeee...". I'm Eeeee... the Doberman, y'all.

(Fun Fact: I originally intended for me to be shivering and cowering behind my mom, which would have made it more hilariously pathetic. She was supposed to say something along the lines of "wanting to leave me (insert location here)", but I thought that was way too mean-spirited and... I didn't want to get my mom in this picture, because of future problems that could arise from that.)