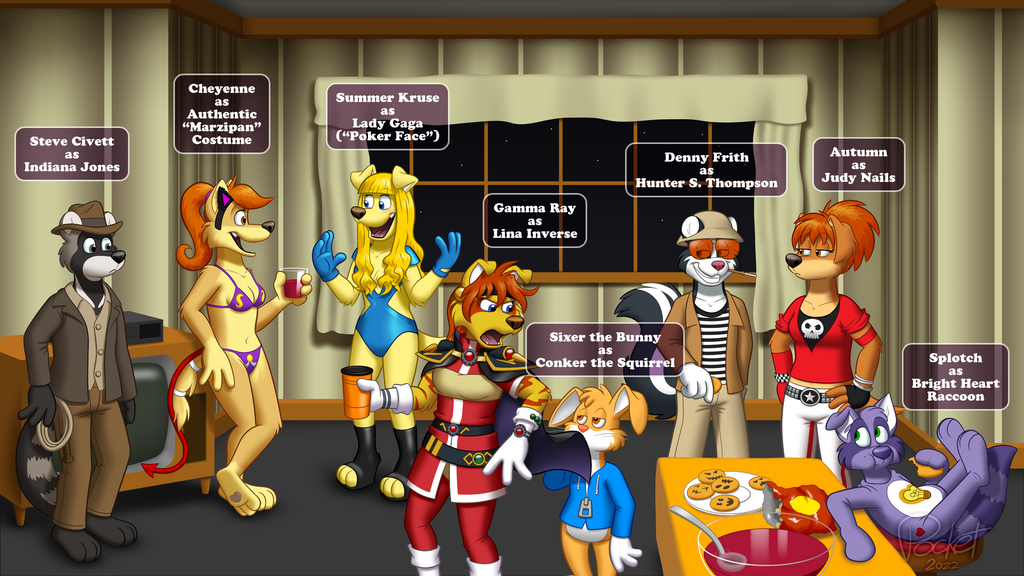 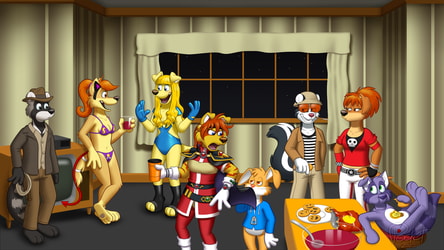 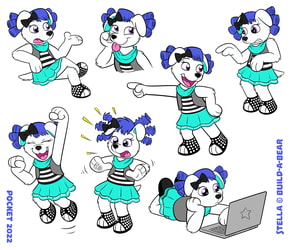 And here it is. Might as well provide some extra commentary while I'm here. Just like in the Homestar Runner Halloween specials, every costume is an actual character from some piece of pop culture that's thematically appropriate to the one wearing it in some way—profession, personality, etc. So let's just go down the list, shall we?

Steve Civett as Indiana Jones: Since Steve is basically just me, his running theme is probably going to be just "characters from things I really like." Indiana Jones remains one of my favorite film franchises despite—like most people, I think—pretty much only actually liking two of them.

Cheyenne as the Authentic "Marzipan" Costume: Normally "sexy so-and-so costumes" wouldn't be eligible for this, but this is actually from something (specifically this short) so I couldn't resist. Depending on what circles you run in, this might be the most obscure of them all.

Summer as Lady Gaga: The other top contender for most obscure but for a completely different reason: It's hard to pick any particular look of hers that's iconic enough to be recognizable. (I guess the bubble dress is pretty memorable, but that would have been a nightmare to draw.) So I went with the first one that came to mind, the blue leotard from the "Poker Face" video.

Gamma Ray as Lina Inverse (Slayers): Funnily enough, between the time I originally sketched this out and when I went to redo it, all the reference images for the original outfit had vanished from the internet, leaving me to wonder if I'd imagined it. By the way, I do my coloring on a bunch of separate layers; this one required the most by far.

Sixer as Conker the Squirrel Conker's Bad Fur Day): Originally it was going to be Splotch standing here and making inappropriate use of Gamma's cape, but as the list of possible costumes grew, Splotch's grew almost twice as fast as everyone else's, so I had to split it in two.

Denny as Hunter S. Thompson: "What did the late Mr. Thompson do to deserve this?" you may ask. Honestly this one is kind of an in-joke between me, myself and I. In the comic strip I'd originally created Denny for, he was a tabloid reporter, and there was a storyline where he drags the protagonist along on a road trip to Vegas. There was even a gag where one of them is scanning for station on the car radio, culminating in the punchline "Whoa! We can't stop here; this is country!"

Autumn as Judy Nails (Guitar Hero II), my introduction to the series and still my favorite installment, although her revised look in III might have been more on-brand for Autumn.

Splotch as Bright Heart Raccoon (Care Bears): This is another one that's kind of personal to me. I was super into Care Bears as a kid—collected the toys, watched the cartoons—and Bright Heart was, for all intents and purposes, my spirit animal. Originally this was going to be a hooded kigurumi type deal, but he still would have painted the mask onto his face anyway, so why not go all the way with it? You might notice he even buzzed his hair... a concept that kind of weirds me out now that I'm thinking about it.

As for the location, I think I'll keep my secrets for now, and continue using it in future years—though probably not from the same angle. But I leave you with an extra hint: That right-angled alcove with no furniture and the dark gray ceiling and floor are some rather unnatural décor, wouldn't you say? Almost as if it wasn't a choice the designer was free to make.