Galactic Maid Taurus and the Colossal Conundrum by Ficus 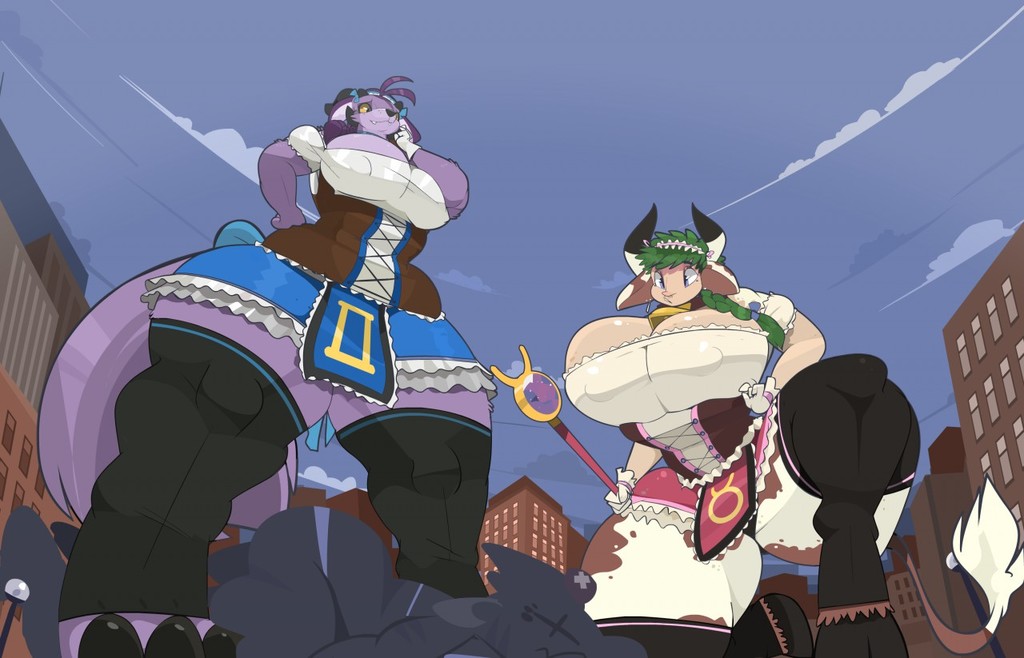 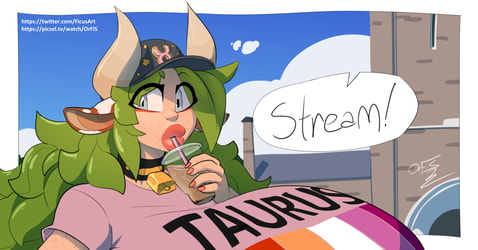 In today's episode, the scientist Courtney Corvus had constructed a way to expand organic material. Her grand fruits and vegetables would feed millions! Her only issue was a power supply potent enough to maintain the mutated meals. The Andromedan Empire corrupted the creative crow, and gave her a power supply that harvested and channeled mayhem!

Driven mad by impish intergalactic interference, the obsessed crow turned her twisted talents on herself; Expanding the mad woman as she unleashed her dark destructive dreams on the denizens of Zodiak City.

Her fantastical physical size and monstrous muscles proved perilous for the puny Galactic Maids, but she was hoisted by her own petard when she tried to expand her enormous frame even more. In the fight to stop the beastly bird our heroines hampered her hellish handicraft, breaking the machine. In an explosion of unleashed energy, the two turned titanic! Now fighting someone their own size, they found the tussle much easier.

THUD!! The Massive Miscreant fell to the ground, cratering the concrete. The Galactic Maids have won, the villain is purified, but they’re all still huge.

“Is that it?” Gemini asked.

Taurus leaned down to check the pacified villain “Is what it?”

“I just thought we’d be shrinking when everything was done.”

Taurus picked up the broken MASS MULTIPLICATION MACHINE. “Yeah, I kinda did too. Should we like, take her somewhere?” She stood up, splashing more Galactic Milk on buildings and bystanders who have gathered nearby. “The park is just over there.”

“That’s like 10 blocks away. We can barely fit on the roads.”

“Do we just wait for it to wear off?”

“I’ll have some succubats see if she had anything we could use at her lab.” Gemini suggested, “I’ll let my bigger half kn- OW!” The colossal queen yelped.

“Thought feedback.” Gemini rubbed her head. “I’ll tell my *other *half. Let’s just like, sit here and wait I guess.”

The two Galactic Maids made themselves comfortable as they waited for backup, with only minimal building damage and collateral milky purifications. Between all the milk damage and the buildings flattened in the fight, this looked like a nightmare to clean up. Luckily Zodiak City had excellent cleanup and construction services. Taurus knew that by this time next week, everything would be back to normal.

Gemini spoke up first. “You know, this isn’t the worst. We could probably use this.”

“Oh my god don’t you start or we’ll never be able to go anywhere. There’s no way I’m not going to be the tallest maid.”

Unbeknownst to the Galactic Maids, they were being observed even now…

Balina for commissioning this, and working with me on the idea. I’ve wanted a Commoddity pic for so long, and getting this made me excited as heck.