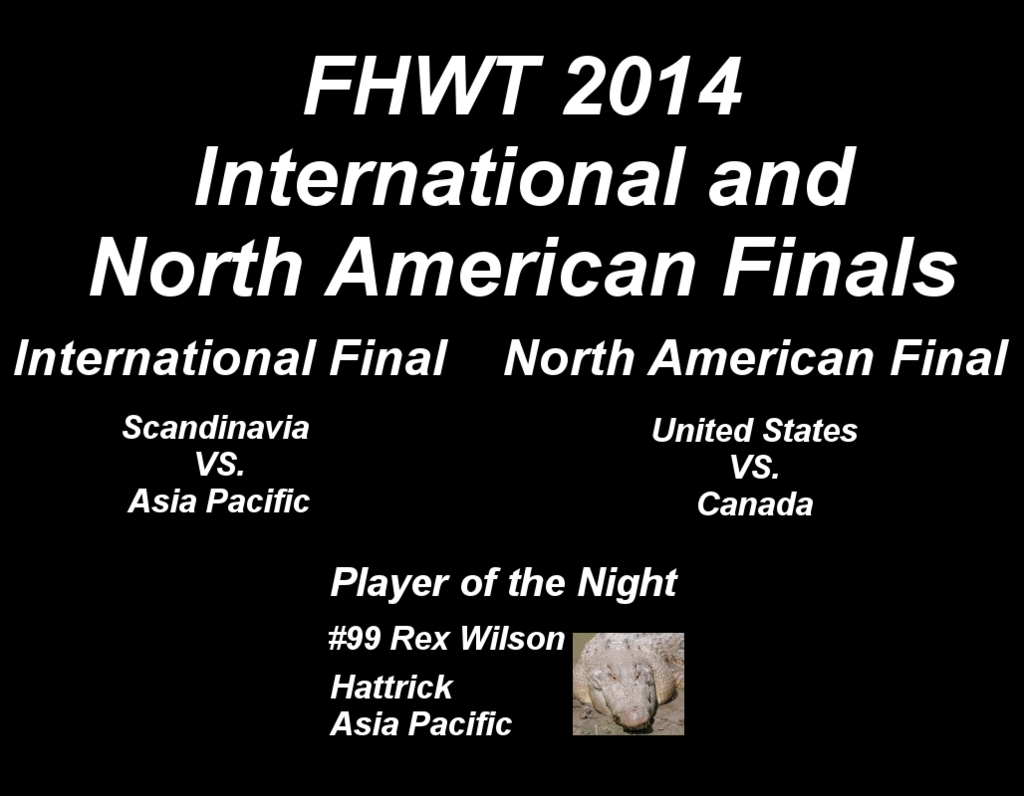 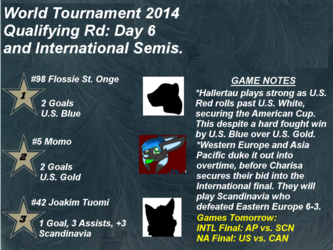 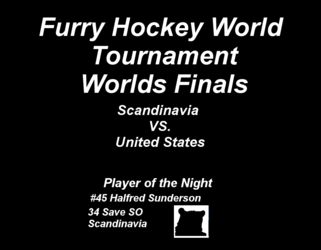 Asia Pacific opened the scoring with an early goal by Rex Wilson off a sharp pass from Yum Cha, giving them a short lead. That lead would be answered by Pekka Rentanen several minutes later, for a few brief seconds would keep the score even before Rex Wilson answered the bell agian, picking up a pass from Khalil Londoni and sniping it past Scandinavian Goalie Halfred Sunderson, putting Asia Pacific back up 2-1 as the period closed.

As the Second period ticked by Scandinavia was able to find an answer in a goal by Bjorn Grafeldr, bringing the game back even, to which it would stay going into the third. In the third, Asia Pacific dodges two early penalties before Rex Wilson scored on a breakaway, completing his Hat-trick on the night.

It would not be enough although, as second later, Jussi Saukko answered, and set the score tied, to which it stayed through the end of regulation. In overtime, Asia Pacific put the pressure on Sunderson, hoping to wiggle the game winner through, with over 11 shots to Scandinavia's 5, but it was the final shot by Ty Sunderson that clinched it, on a sharp pass from game tier Jussi Saukko, and lead Scandinavia to win 4-3.

For the North American Final, it was the battle of the "Reds". The respective color teams from both qualifiers had made it through to the finals, and faced of agianst each other for their respective countries in their bid to play in the Worlds.

The first period started quietly, before a little from half way through the United States was the first to score, as Auro sniped a goal top shelf agianst Canada Goalie Majorie Jones. Team Canada answered several minutes later off the stick of Etienne St. Claire, and kept the score tied as the period came to a close.

The United States began shifting players as they had been all tournament as the second period started, with Saaz Hallertau replacing Amora Akecheta Zeckel in the net and getting help from a subbed in D.L. Leonine. Subs completed, the United States opened the period with a bang, with Rydarius scoring to give the US a 2-1 lead, with assists from Krystal Lawrence and Camo Rovak. The US would continue their shifts through the period, and Team Canada's Grey Ash would have to be helped to the locker room after a hard hit(but returned in the third period), but the score remained 2-1 as the game entered the third.

The score didn't stay that way long, as an early burst of action by Team Canada lead to Bluefire scoring the tieing goal 2-2, however the tie didn't last long as Jordan Rinehart responded and put the United States up 3-2, which the team held on to the lead to the buzzer, to win 3-2, and take the North American Final!