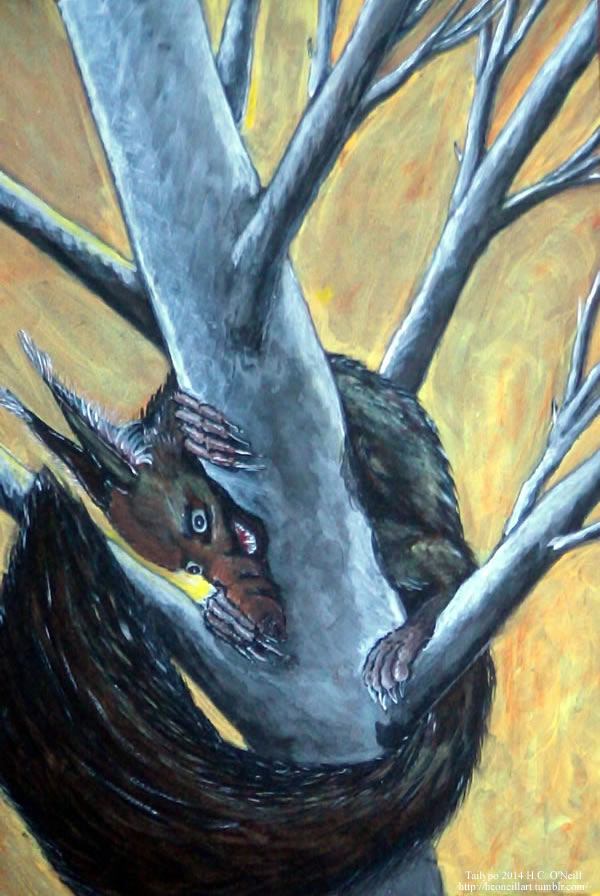 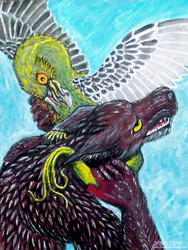 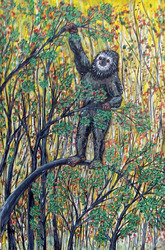 It’s a long lean winter and a hermit goes out hunting with his three dogs for something, anything, to eat. He catches a rabbit, but that won’t go very far between him and three dogs.

Just before dark, his dogs tree a critter he’s never seen before, with a great bushy tail, tufted ears and weird eyes. He can’t get a good shot at it, but can almost reach it in the tree. He tries to hit it with a hatchet but just cuts its tail off. The creature shrieks and runs off through the tree tops as darkness falls.

The hermit takes the tail home and makes a stew of it and the rabbit. It tastes funny, but at least its filling. The dogs get the leftovers and he goes to bed while they lick the pot.

He wakes to a scratching noise and there’s the beast he wounded earlier, climbing up the end of the bed.

"give me back my taily-po!"

He screams at the strange talking animal and his three dogs wake up and attack it. They go round and round, tearing up cabin so he opens up the door and they run outside. It gets quiet and two dogs come back, covered in scratches. There’s no sign of the third.

He tries to get back to sleep, but its not long before he hears scratching again.

"Give me back my taily-po!"

He screams even louder and his two remaining dogs leap up and attack the beast, going round and round the cabin. He again lets them out but this time only one dog comes back, even more scratched up.

He settles down with the dog to wait out the night.

But the scratching returns and the beast is back again.

"Give me back my taily-po!"

He doesn’t even get to scream this time, the dog’s already up and after the beast. He lets them out one more time and then waits and waits…. but the dog doesn’t come back at all.

He sits up. waiting. There;s broken furniture and scratches all around the inside of the cabin from the last three fights. And then hears the scratching sounds again.

"give me back my taily-po!"

"I haven’t got your taily-po!"

And it leaps on the man and rips his stomach out.

It got its tailypo back in the end.