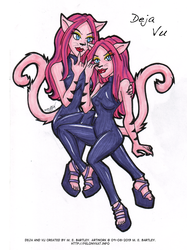 A commission for MoDad, one of the players in the longest running SWAT Kats RPG I was in. It ran for 11 years before disbanding and I was there for most of that time. The MBI stands for Megakat Bureau of Investigation and was originally inspired by the fan fiction of SageSK in the SWAT Kats fandom. The MBI was to take on the cases the Enforcers couldn't or didn't want to handle.

As a parody of the Last Supper painting by Leonardo Di Vinci are the agents of the MBI. MoDaD wanted to have all agents at the table. There were more than 13 agents so I included at least 1 agent for the players who were currently active in the RPG to its end.