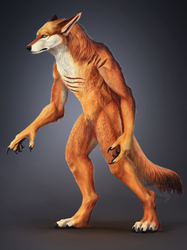 Sooo.. originally this was going to be a Halloween adopt, but I got caught up and ended up liking the design too much so I'm keeping him as a character for a comic I'm planning on :D
I spent all of tonight doing effects for the anthro icon I made to go with it and I'm actually happy with how it turned out! He's halfway between feral and anthro but I haven't decided yet if he's gonna be able to change between or just stay as is. Also elemental cos elementals are my favourite type to concept <:
He is an A N G E R Y B O I. Haven't thought of a name yet, open to ideas if any spring to mind!

Anyway yeah this is the animated version, I will probably put the static version up in scraps later as well as the avatar piece.
I might even do a model of him cos blender's principled fur shader is too good you guys. Just. So. Lush.

Let me tell you guys I had a hell of a time trimming down the 3 second gif into something that FA can actually handle for avatars. Like constant experimentation on 'will dropping just this extra frame bring it down to the size limit'?