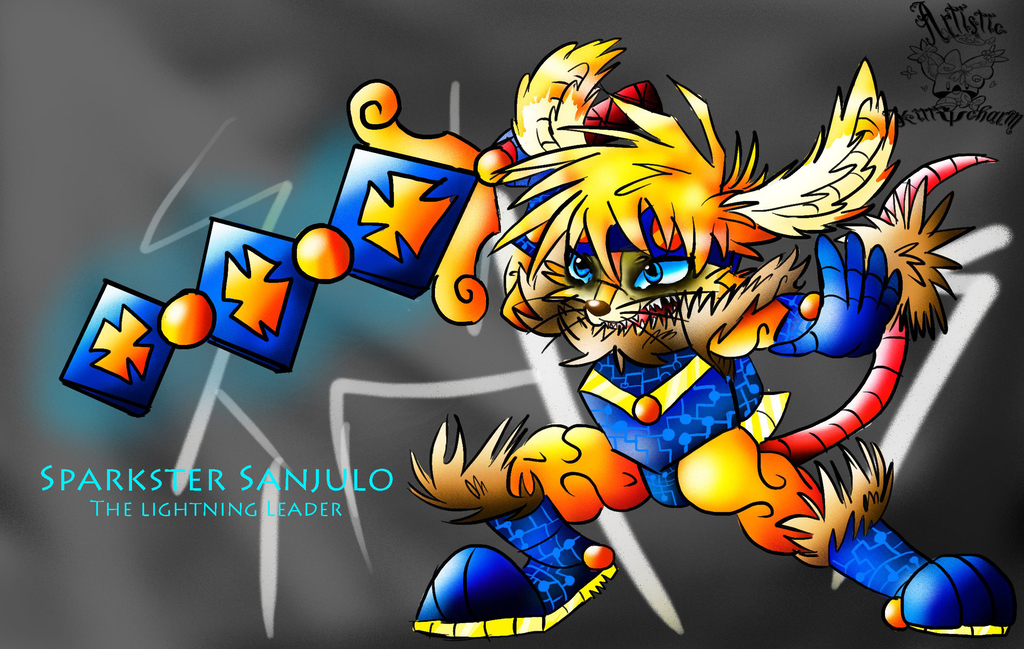 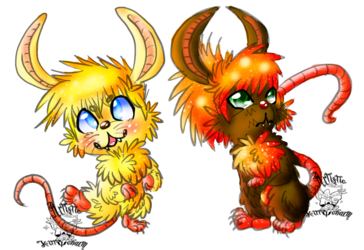 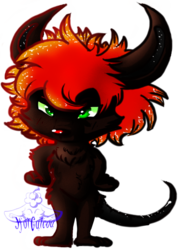 lol. Oh Sparky, you're just too cute to go around trying to look intimidating~ Leave that to your sexy scary, evil, older brother, why don't ya?

So yeah, my entry into the redesign contest on deviantart. Considering I always redesign him, I thought I would try to go all-out on him... as you can tell, I still suck at armor! I need more practice... oh, and his hair looks metallic - I need to work on that.

Anyways, I guess I'll explain my design choices; as already known about the Rk series, it is steampunk. The combination of old and new. The 'rocket' being the technological advances; the 'knight' being the less advanced and more traditional. I took both these themes with the intention of turning them into the extreme direction.
I went with a computery design on the armor, and a fantasy twist on the sword. Sparkster himself was supposed to more barbarian than a knight. As I said, taking the theme and turning it into an extreme. I also went with more bright colors, since his name is electricity; electricity can be both yellow and blue, and I wanted to reflect that in his color scheme.
You probably already noticed the fur. Going with the more violent theme... he took the pelt off a wolf, okay!?

Knights seem to be romanticized in stories, but I wanted to bring out what they really are - fighters. You can't be a knight, if you're a sissy. I like Sparkster as cute, but I wanted to do something different. I wanted to make him the warrior he is supposed to be. As a leader, he supposed to be strong and able to be looked-up too. Not to say I want his personality to do a 180, but design-wise, I think he could use more intimidation in his look. Possums are actually known to look frightening to scare away possible competition for food, so why not use that fact here?

Now back to that sword... goodness! It's worse than the one I made Snowskii... geez. I was going for something that looked like it could be a lightning rod. Also, its supposed to be magic. I don't buy that RK 2010 thing, with the sword using... whatever fuel in the rocket pack. I like magic better, dammit!

Also, return of the skunk stripe! I put some of his blond on his ears as well. Something I disliked as the series progressed, was how they tried to make Sparkster look more and more human. No, just no. Not here! I wanted to give his fur something so it would not be similar to other possums. I dislike the idea of them all being exact carbon-copies of each other. I wanted him to be very distinct in this design.