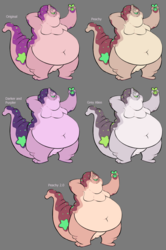 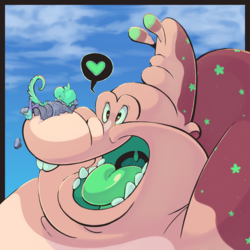 Oh jeez it took a bit for me to finally get around to finishing this but I wanted a brand new ref for my sona. Unlike my last one I focused more on like tips to draw him correctly.

While there's some general modifications I did to the design to like better distribute details the biggest changes are...
-> Eugene's color palette is noticeably different. Most notably his main color is no longer grayish pink and is instead more of a salmon color.
-> He has thumbs now.
-> Those stars on my sona's body are now on all his magenta areas rather than just his back because design consistency.
-> His tail is longer and less lumpy.

Also since I didn't no where to place this just some extra info:
-> Eugene is a completely hairless creature and I mean that literally. He's not like a human where we have like still little bits of poof throughout our body.
-> His blood is the same green color as his stars among other body parts.
-> The big star on his tail bumps out (think of it having the same texture/width as his paw pads).
-> All green areas throughout his body glow in the dark.