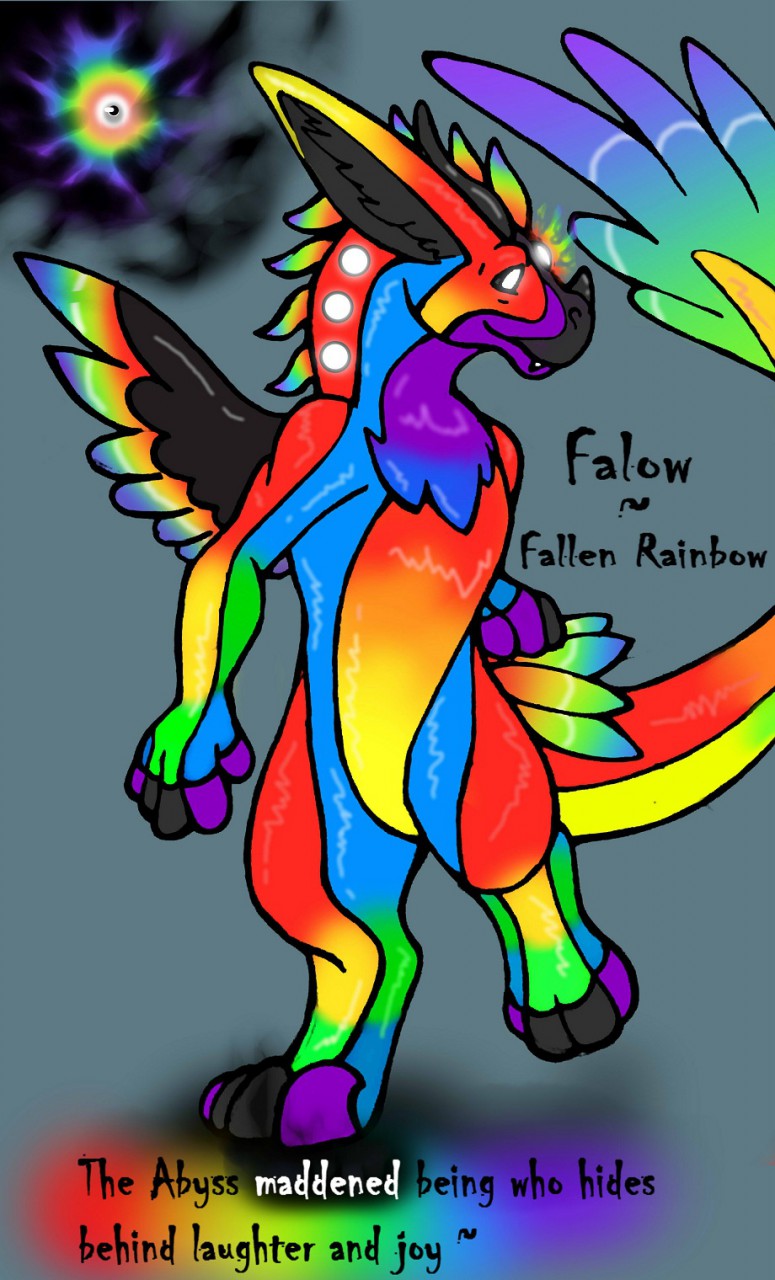 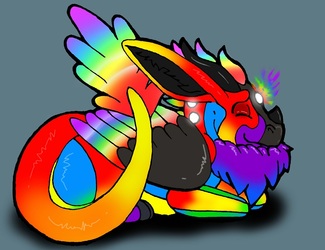 This has been a character in the works for some time and it is time they are shared! Meet Falow! The coffee loving goof ball with a maddening secret~

Yes, they are over colorful and it is glorious!!! Curious why? Read!

Born in the realm of paradise and their name was Rainbow, that was all they could remember; time could not be recorded for how long Rainbow was lost; their former life forgotten, warped into another after having joined with the Ancient one into the Abyss after being cast from the realm of paradise, having followed the path of their sibling who had loyally followed the Ancient... Darkness had crept into their heart as they continued to blindly follow their sibling all the further within the nightmare realm. Rainbow's mind became vacant, nothing but a nightmarish creature that sought to spread horrors and calamity to wherever it traversed, thus gaining a new name; False.

It was not until their sibling fell... their final death cry shattering the chains of madness, releasing False's mind long enough to realize where they were, and in terror of the darkness, False fled from the abyss, never looking back.

Finally collapsing from exhaustion, False found themself in a lighter realm... still not paradise, but it felt lighter, calmer. There the dragon found a serenity even though suffering seemed around; False found the Aether.

Time passed and The dragon tried to shred the darkness that once encased their body and mind, altering their once corrupted body, having played with the many different children they have stumbled across from time to time that lived in the Terra plane, bright colors soon lavished False's hide. The dragon took on a foolish, joyful personality, trying to strive in spreading laughter and happiness to those they came across be it in the Aether or Terra. It was a mask, the colors, the laughter.

While False had escaped the Abyss, it remained as a dark tar in their soul, forever whispering and trying to drag them back into the darkness; the madness. With the aid of implanting crystals of energy along their form, the dragon fed from the joy and happiness they helped spread to others, leeching what they could to manifest a barrier; a wall up around their soul to keep the darkness at bay fearful it would once again spread and make them fall once more to the Abyss. From then on, False combined their former and new name into one, creating the name False Rainbow, or as they shared it to others; Falow. Though they dare never to tell anyone its true meaning, only carrying the name as a haunting reminder of what could come to pass should they fail in keeping the light of happiness around them and their soul.

As for that eye surrounded by both rainbow and darkness; that is the madness 'eye' When or rather if the madness becomes too much to bear at one time, it creeps out, warping the crystal along their forehead to look like that, and their real eyes will be shut for Fallows mind will be asleep and nothing but a puppet. If the madness eye creeps into all the crystals along Falow's form, they warp into an abyss corrupted monstrosity and can never return to their former sane self.