Some people call me Eye. I draw, 3D model, and compose music. I write as well, but I don't know if I'll be submitting any of my writing here. We'll see! 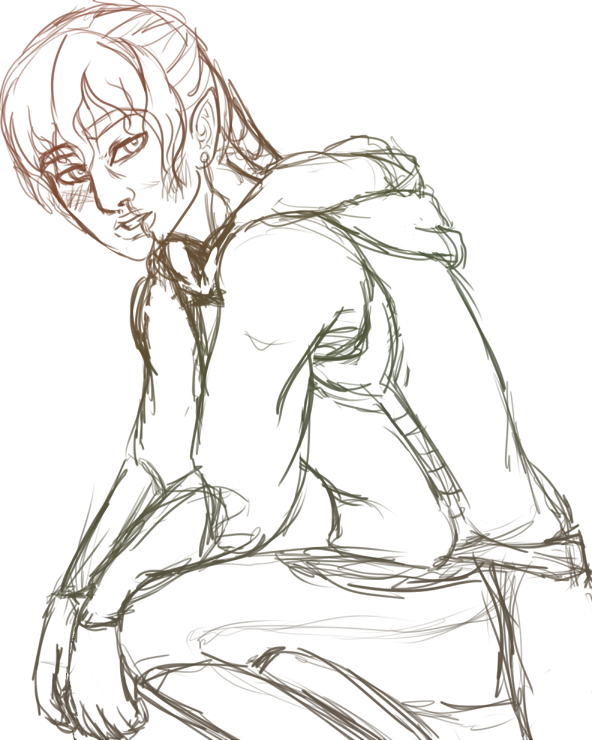 What's your real name?
Stacie. It can either come from the Russian name Anastasia, meaning resurrection, or the Greek name Eustace, meaning fruitful.

Are you single, taken or undecided?
Single, but not looking.

What do you do in your spare time?
I draw, obviously, but most of the time I just goof off on Tumblr or play video games.

What do you like about yourself?
Everything. I am perfect. 8D

What do you dislike about yourself?
Everything. I am utter garbage. 8D

No, but seriously. My entire opinion of myself could be illustrated with a shrug and an "Eh."

What did your friends notice about you when they first met you?
I really couldn't say without asking them. I have no idea.

What is your belief/religion if you believe in anything at all?
Agnostic. I believe that there certainly could be some higher power or a lack thereof, but I'm not really commited to the idea either way.

Do you drink?
I don't really like the taste of alcohol, so I really only like the flavored ones with low alcohol content, which I suppose I'd drink more if I actually had the money to buy them. Haha.

Do you smoke?
Not at all. I actually tried a cigarette once when I was a little kid. I coughed and hacked and never tried one again.

What are your major fears?
Probably heights, but only if there's no fence or some sort of partition between me and the ground.
I'm not overly fond of spiders/insects either, but I don't run screaming at the sight of them.

Longer term, I'd like to start a game dev company. However realistic it is aside, I'd like to make it happen one day.

Have you ever had a crush or an ex?
I've had little crushes here and there. The only boyfriend I ever had was while I was in high school. It's... kind of a funny story, actually. Or creepy, depending.

I met him on a church bus. He was this sort of chubby dude. He seemed nice enough and he was interested in me, which was more than I could say for a lot of people. He asked me if I wanted a boyfriend and I said sure.

Then he told me that he was in anger management and that he killed his ex-girlfriend's dog. I have never exited a relationship so quickly.

Who's your best buddy?
ko's icon -ko- over on FA

What's your favorite dish?
That's a tough one. I really can't decide. I can narrow it down to a couple of categories, though; american chinese food and tex mex.

What's your favorite drink?
Other than water, I really like Tampico tropical punch.

What's your favorite color?
If I had to pick, it'd probably be turquoise.

If you had a super power, what would it be?
Shape shifting! (brb turning into like a griffon or something)

I was really impressed by James Cameron's Avatar, plotholes and evil humans trope aside.

What's your least favorite food?
There are a lot that I don't really care for, mostly vegetables. Haha.

What's the last meal you want before you die?
Sesame chicken and fried rice with some teriyaki chicken and a couple of crab rangoon on the side.

Or some fried chicken with mashed potatoes and brown gravy. A side of corn on the cob and some fresh baked dinner rolls.

What do you drive and what would you really like to drive?
To my everlasting shame, I don't know how to drive just yet.

What is your most disliked bug?
Bed bugs, lice, mosquitos. Anything that makes you itch.

What pet peeves do you dislike the most?
Uh, I'd probably start to dislike anything done with a lot of repitition.

For example, I read several of the Dragon Age novels by David Gaider. He had people "ignore the pain" so many times, I got really sick of reading the phrase.

Same with the Mass Effect novels by Drew Karpyshyn. He liked to say "by way of introduction" or "by way of" things a lot.

Still love the novels. Just got a tad bit annoyed at those phrases.

What do you dislike in life?
Not a whole lot really gets to me. I dislike rudeness and vitriol, but that's more of a people thing than a life in general thing.

Sketches will be as clean as possible.

Simple animations are two to five frames long and include, but aren't limited to blinks and expression changes. For other ideas, you can always ask.

I may offer 3D model commissions in the future. Check back in a while if you're interested.

You are welcome to post your commission anywhere if you credit with a link to any of my galleries. Any commercial use must be discussed. In the case of commercial use, additional compensation may be required.