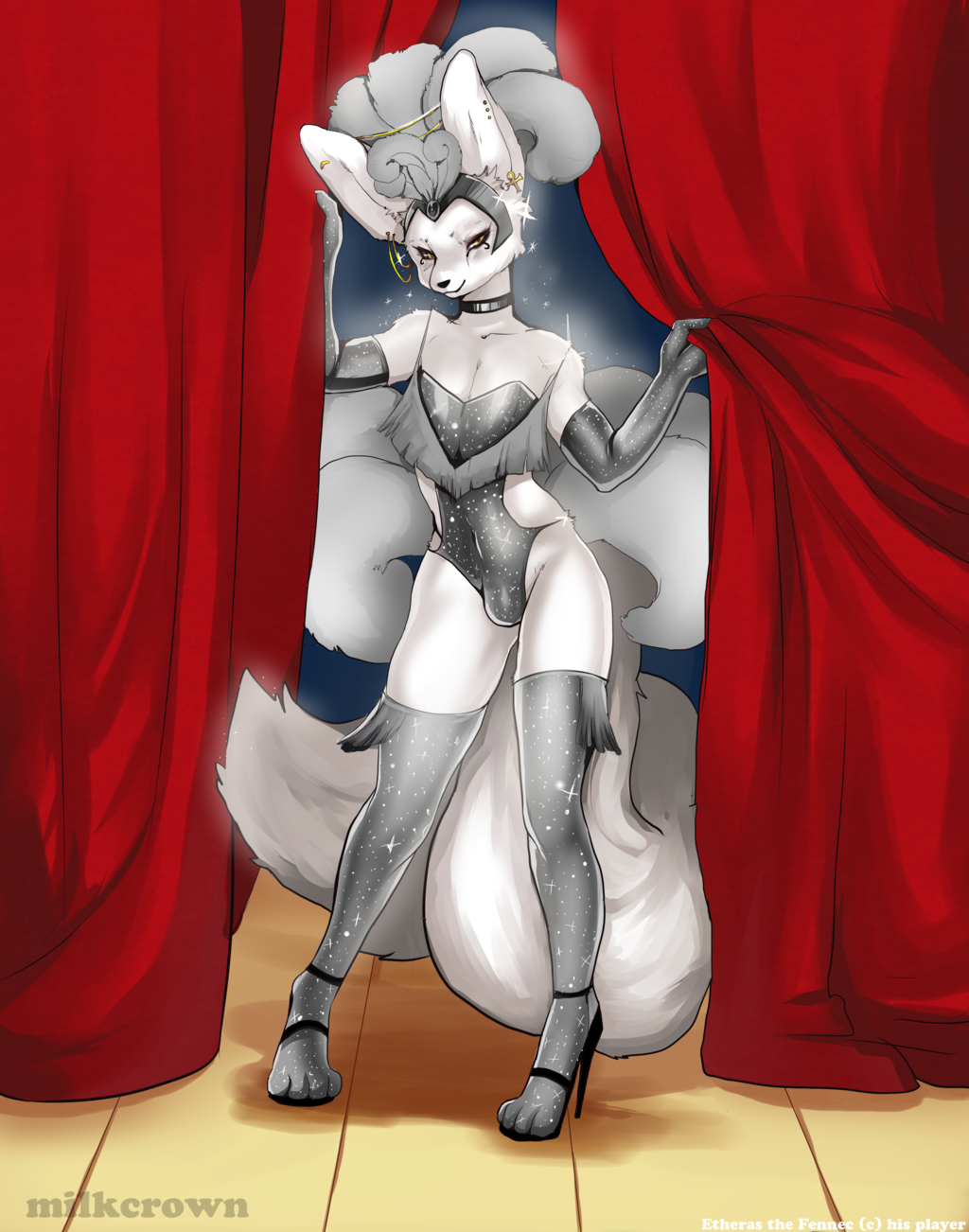 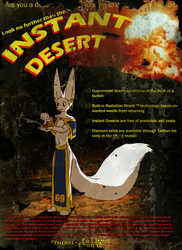 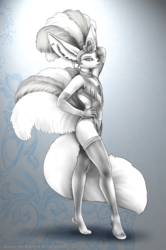 WARNING: the following story may contain content disturbing to some readers.

The boi suppressed a grin and a wave of excitement as he poked his pure white muzzle between the thick blood-red velvet curtains... the spotlights' glare off the stage bathing his face in luminescence as he watched the theater filling up. Etheras leveled his eyes at them... reading the guests as they filed in... gazing through the tailored suits and silk gowns to the meat contained within them, and finding them wanting. These were the mock-aristocracy; individuals who put on the fancy jewels and used the proper fork for the proper course... but were only going through the motions - not the true aristocracy. Aristocrats didn't just act superior - they were superior. Beneath the bluster and pomp there was formitability. They had climbed and clawed their way to the top and emerged victorious. And thus, true aristocrats understood the importance of image and cultural refinement, extravagance and grandeur Despite the benedictions of the free world and it's naive belief in equality, there really are some people apart from than the rest. And Etheras knew his place as the best of these.

The crowd was filtering in like well-dressed cattle, moseying down the wide carpeted isles, finding their way to their way in their feed-pens (which happened to be in the shape of round tables draped in white Egyptian linen, encircled with plush chairs). Others were making their way to even-more extravagant opera boxes that lined the top balcony of the theater. A few adoring glaces caught Etheras's pretty peeking face... followed by a delayed wave of nudges and whispers, and even a cat-call and whistle before Etheras drew his head back in -"mustn't spoil the surprise" he chided himself silently, running his satin-gloved paws down his flanks, feeling the hard bumps of gemstones and prisms sewn strategically into his costume, and how they felt under his paws, before going back to one of the makeup tables to check that his features were still perfect... and they were. Or perhaps just to admire himself... how his lithe young body looked hugged in that tight silver satin. How the plush feathers behind him swayed alluringly...

"Quite a crowd out there tonight." said one of the other boys in the troupe. Etheras gazed at him contemptuously. This one was part of one of the warm-up acts. Etheras had hired him personally, never considering how annoying or stupid one person could actually be.

"And what did you expect? It's the opening-night of the first international tour of my show. Naturally people are curious. It may be every day that some self-diluted aristocrat creates garbage that fawning sycophants trip over themselves to laud with critical acclaim, but it is not every day that the aristocrat actually deserves it." Etheras responded softly as he touched-up some of his eye-liner, his ego luxuriating in his words.

The show had been among Etheras's few vices. Being a boy of unique beauty and aesthetic taste, but also with a taste for personal aggrandizement, Etheras made it a common practice to leave the fortress of the Fennecropolis on certain nights and don his alter-ego 'Narcissus' - an exotic dancer at the classiest club in the city, servicing the officers of the Fennecropolis garrison. He couldn't help being exceptional, and it wasn't long before word of this show began to spread around the city... and beyond. This made it a security risk however, and before long performances were held at a private theater built into the Fennecropolis specifically for the purpose. He relished the feeling of all those admiring eyes upon him, undressing him in their minds, arms fidgeting to hide arousals... and eyes wanting more, never seeing what lie beneath those shimmering costumes. He liked that most of all - knowing that each would go home with the snow-white fennecboi haunting their thoughts.

Etheras saw movement at the lighting control board and glanced over. It must be approaching the start of the show. LEDs flickered as the board's programming kicked on, and controlled the choreographed lights on the stage. The bass rumble of the starting score buzzed through the walls - the muffled midrange of the announcer's voice, muted, mixing in with the music shortly thereafter. Etheras remembered from the script, reciting it in his mind alongside the voiceover... which was recapping some ancient Egyptian mythos.... setting the context for the performance to come. The bois for the "warmup" act queued up, readying themselves for their appearance on stage. They were also the backup dancers for Etheras himself, and were talented, competent and confident. Their faces hadn't a trace of nervousness. Some faces even showed barely-suppressed excitement. Not-just-anyone is asked to join Etheras's show, after all..!

As the songs changed, the line of boys trotted out between the curtains, and Etheras went back to admiring his visage in the large mirror, watching how the light glinted from his costume... and he smiled.

Etheras was the ruler of Greater Nubia, an emerging superstate on the banks of the Nile that had many other nations worried. From the blank-faced docile zombie-like peasantry to the disturbing tendency of hostile diplomats to abruptly and completely change their opinions after visiting, to the horrifying rumors of what lie deep within the ivory walls of the Fennecropolis... there were many conspiracy theories of what was really happening in Egypt. But none could be substantiated.

But none of these conspiracy theories were paranoid enough; the truth was far more virulent and insidious than any could seriously comprehend. Etheras fancied himself ruler of all reality and all unreality. And to this end, Nubia had embarked on developing powerful mind-control techniques, so that Etheras could corrupt individuals of power all over the world and make them his agents. Tonight's audience would make easy prey for him; weak-minded, weak-willed fools with power and wealth beyond their own abilities to control or even understand... He would use them up - wring every bit of influence from their positions, every penny from their bank accounts, and leave them docile blathering sycophants worshiping at his feet, ecstatic to be a nameless forgotten carcass in the mountain of corpses Etheras would climb to his ascendancy.

Previously, Etheras had used more direct means to impose his will upon the "lesser creatures" whom he had come into contact with. This would be the trial-run of a new technique he was trying that was more subtle... and completely undetectable. The silver sequins on his costume caught and bent the light in a dance carefully choreographer in such a way as to reach into the deep structures of the meat-computers of his audience's brains and promote subtle changes. The brain is often referred-to as an "analog computer", but it is often unappreciated how close to the truth this metaphor really is. At the assembly level, "data" and "instruction" in a digital computer are indistinguishable. The only protection a digital computer has from executing code hidden within data is the diligence and competence of programmers to protect against it - something which is never perfect, and so vulnerabilities in digital computers are inevitable. The same applies to the brain... only moreso. Evolution builds inefficient sandboxing. The most famous example of this is how the bright strobing of blue and red lights (data) triggers seizures This is essentially a "brain crash". Worse still is that the brain saves all sensory input in the form of permanent storage - the biological analog of firmware, in-that learned information can actually change how the brain fundamentally behaves. Thus, there is an unbroken vulnerability between what a person experiences through their senses and what they think, believe, and feel. It takes only the proper stimulus... the proper sequence of lights and sounds and movement... and a person can "root" the mind of another. This had been attempted before many times - hypnosis, subliminal messaging, and during the Cold War in CIA's now-infamous "MK-Ultra" program. But none of them had the technology or sophistication that Etheras had committed to the project... carefully mapping the mind, tracking how lighting patterns translated to electrical impulses, recording what structures the impulses traveled to in the mind and the changes those signals prompted, what chemical and hormonal substances were produced and in what quantities, and then devising a series of lights and sounds that tickle the brain and reprogram it - nothing drastic. Just a few suggestions. This was a trial-run, after all. And he built into his show that series of light and sound that would duplicate the patterns that he wished to achieve.... and the moment was approaching.

Etheras perked his large fennec ears as he heard the music slow. He reluctantly left his reflection and took up his position at the point where the heavy curtains came together. He smiled malevolently as the curtains slid apart. Bathed in spotlights, he stepped out onto the stage as a gawking hush fell over the audience, and whispered softly to himself, "Showtime!"

Repost Authorization Rating: FREE
Dunno what that means? Be sure to read this:
http://www.sofurry.com/view/365517
... before reposting.