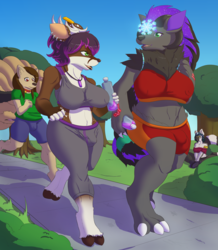 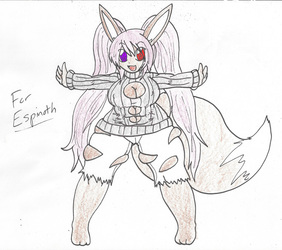 Everyone say hello to Rania!  An anthro Hoopa from the Egypt equivalent of the Pokemon world  (Expecting it to have a canon name eventually.  And NO.  It's not Orre.  Orre is based on Phoenix Arizona.)~  Rania Din Coronella, at your service~  Here's a breakdown of her name: Rania.  In Egyptian, it means delightful.  And in Norse, it means nobility!  A good combination that describes how she acts.  Din: the name of a dancer, the Oracle of Seasons from the Zelda game of the same name; as well as the name of one of the three Golden Goddesses of Hyrule.  Namely the one that represents fire, power, and the creation of land.  Coronella...  Is a flower.  Flowers, like everything else, have meaning.  This one in particular means "Success crown your wishes."  Fitting for a djinn Pokemon, wouldn't you say?  And because she's a djinn...  I gave her Shantae's hairstyle.