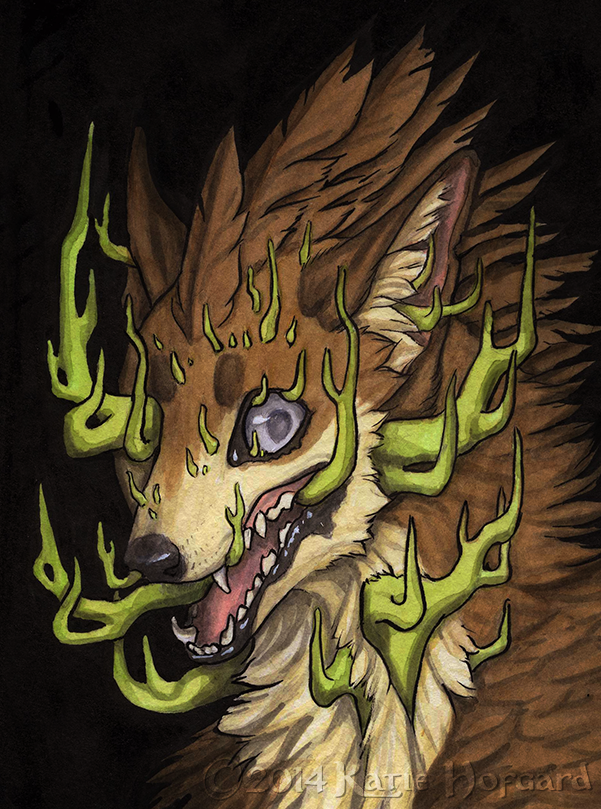 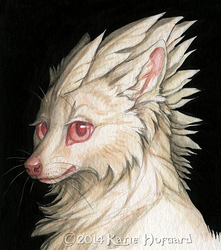 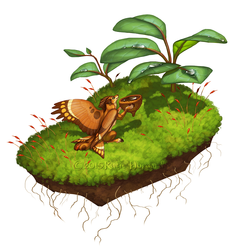 I originally intended this to be a commission sample for small watercolor and ink portraits, but I made the grave mistake of using crappy watercolor paper. The paper wouldn't absorb the pigment, it just floated on the surface. As a result I never got the saturated colors I wanted, and had to edit this in photoshop more than is necessary.

So instead this will serve as an introduction to one of the horrors of TeaFeathers (because it's not all adventure, friendship, and tea) - The Night Spores. Night spores are an infectious parasitic fungus very much like the Cordyceps of our world. Infections typically begin in the lungs, and it gradually spreads through the body, slowly taking control over the victim's nervous system with the ultimate goal of reaching the brain. From there, it will compel an infected Alecani to fly high, and release it's spores into the air.

Alecani are extremely susceptible to night spores, it's a horrific death if allowed to reach it's final stage. If caught early, an infection can be easily cleared, but once it reaches a certain point, there is nothing that can be done. Pictured here is a victim who is nearing the final stages. The fungus hasn't yet opened up to release spores, but this individual is effectively dead. The fungus controls the body entirely, the person that this was is long gone.

Infected Alecani are extremely dangerous for two reasons; the first, is that their behavior becomes increasingly erratic and aggressive as the infection spreads. The second is the danger of an early spore release. If a victim is already in the stage of showing growths outside the body, and they are kept in confinement, the fungus will sense this. It desires to drive it's victim high in the air to spread it's spores, but knows it can't if it is kept in one place. So it will vie for an early spore release instead, in a last ditch attempt to continue the cycle.

There are special teams of Pylura and Alecani, whose job it is to purge areas of Night Spores, and to track and eliminate victims. It usually involves lots of burning, with the Pylura in charge of the fire and the Alecani in charge of the chasing and tracking. They have to wear special masks to avoid infection, but it's not a guarantee. The spores can get into the body through other means, and they seem "smart" in the way they choose and infect victims. More on that later!

I realize that so many people are coming up with similar concepts, based off the cordyceps fungus. I've been sitting on this idea for years thinking people would consider it stupid. When it started popping up all over the place I really regretted not putting it out there back when I was first inspired by learning of the cordyceps fungus. Now my attitude is to not hold back, and to just make whatever the frick I want, regardless of what I think people's opinions will be. Just make the stuff, and have fun!

I post all head world stuff on a special tumblr just for TeaFeathers, including asks! http://tea-feathers.tumblr.com/