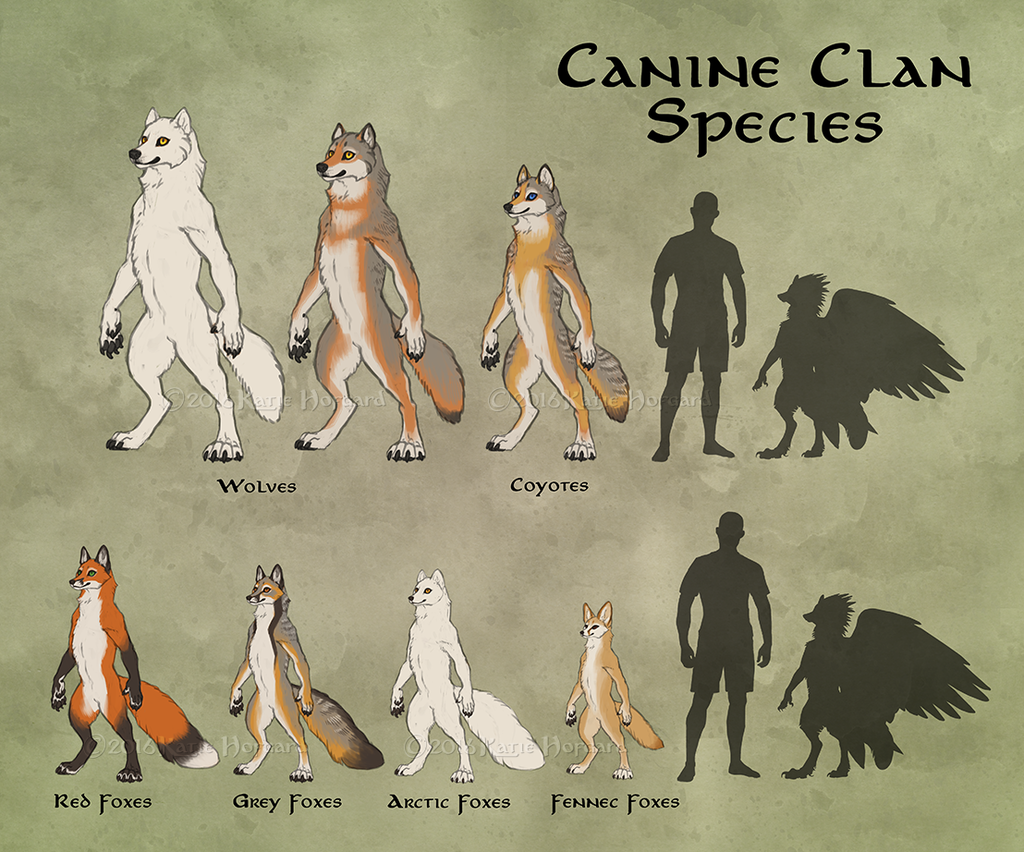 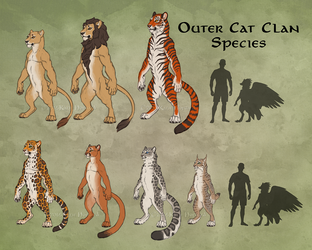 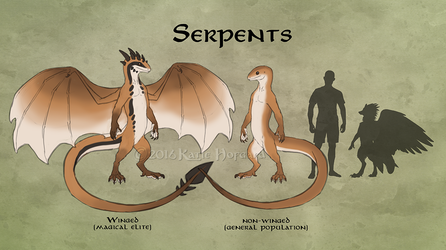 I waffled for a long time about adding sapient canines into the world of TeaFeathers, but ultimately decided on going for it! It felt oddly empty and one sided with the Alecani being the only mentioned sapient canines. And in developing the story for these guys, I solidified the history of the world a bit better! I can't wait to do more in depth studies of individuals from each society, complete with tattoos, costumes, other accoutrements, and better rendering. :D

Unlike the Cat Clans, who are a unified structured society, the canine clans are only loosely allied. They don't share a political system. Their territories do overlap peacefully though, and they tend not to draw borders as tightly as the cat clans. They do, however, compete for resources with the cats. This competition has lead the domineering cat clans to hunt down canines wherever they find them. They see it their divine right to be the dominant predator on the continent, and have actively hunted other apex predators to keep it that way.

For many generations, the canine clans dwindled under the oppression of the cat clans. Until one day, a powerful spirit who saw their suffering, decided to adopt the canines into it's protection. The Spirit of Subterfuge granted each canine clan a special boon, which would help them avoid the cats' wrath.

Foxes
There are several fox clans that live on the continent of TeaFeathers. The red foxes, gray foxes, fennecs, and arctic foxes. They are the most widely distributed of all the canines, and have the loosest borders. They were granted the boons of shape shifting and illusion crafting. Being the smallest of the canine clans, they needed the most powerful protection. With these gifts, they easily trick their opponents and avoid death.

Coyotes
Coyotes occupy a vast region of the inner portion of the TeaFeathers continent, namely in the desert and mountain regions. Already tricksters by nature, coyotes were granted the boon of invisibility. They accomplish this by stepping partway into the spirit world, wrapping themselves in the very material of the veil. Doing so protects them from crossing over entirely, subsequently dying. Coyotes are already very strong magic users, and this access to the spirit world makes them even more fluent in the ways of molding spirit energy into magic.

Wolves
By far the largest and most physically powerful of the canine clans, the wolves range wherever coyotes do and much farther north. The Spirit of Subterfuge saw this physical advantage, and decided to only grant them the boon of silence. They can walk silently among cats, and communicate with one another without the cat clans hearing them. This is done by banishing the sounds they make through the veil into the spirit world. If you could travel through the spirit world, you would hear their footsteps and howls everywhere you go.

When the Alecani came to the continent and allied themselves with the Pylura, subsequently banishing the cat clans to the eastern area of the continent, the canine clans saw reprieve from the constant oppression of the cats. For generations they've done their best to stay hidden and survive, so they didn't get involved in the war. They still don't entirely trust the Alecani, since they've allied themselves with Pylura (felines of all types tend to be distrusted), but there is a lot of peaceful interaction. While the Pylura/Alecani draw borders for each of their tribes, the canines have gotten used to ranging between these invisible lines. They hold no true territory for themselves or adhere to the laws of the Alecani/Pylura, yet do just fine existing peacefully with them.