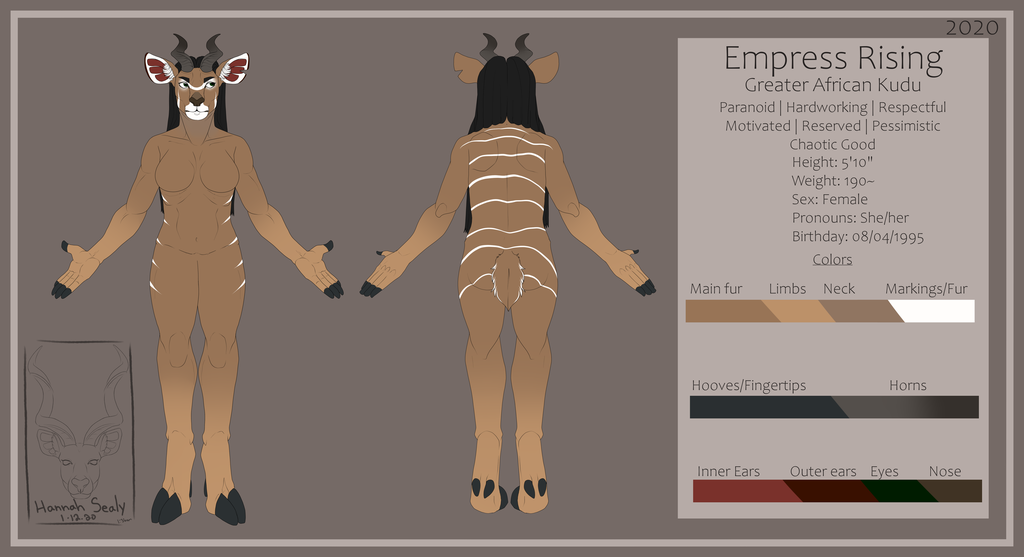 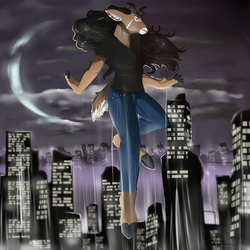 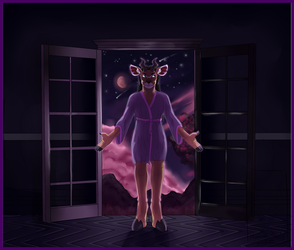 Hello to all! THE TIME HAS COME for Empress to get her 2020 reference, and I am so excited for it. This is a BIG improvement for me, and I'm glad to give her what she deserves.

Some notable design changes from her old designs (pictured below) are that her horns are a bit larger, she no longer has the white tufts on her limbs, and the chest and back mane are gone. NOW, to keep my art canon, the horns have grown as she's aged, and the fur tufts and manes have shed over time!

I WANTED TO SHOW, my improvement from the first time I drew her ref to now:

I will be updating this written stuff as things develop, but I am dropping it here for now. I am also working on her accessories and clothing ref, expect it in a few days.

Empress Rising is born to her father, Rising Sun and her mother, Falling Empress, on August 4th, 1995. She is born into the gang her father runs – The Sons of the Sun. Her father is abusive, ruthless, and is bent on power and money. Empress struggles as a child, but her mother is supportive in her own, strange way. Her mother always informed Empress to never forgive her for bringing her into the world with her father.

Empress' mother is manic, and while she's never outright abusive to Empress physically as her father can be, her advice is often misunderstood. She does not believe in forgiveness, and attempts to instill that into Empress, telling Empress that death was better than living, though to never kill herself because that would let 'them' win, with no emphasis on 'them'. Empress constantly struggles with the mixed feelings her mother gives her, and would often be neglected as her mother would constantly stay high, or be arguing with her father. Empress' mom was far larger than her father, having a full set of horns and standing around 6'3”.
Empress meets Necro somewhere ni her early years, an alien who crash landed on Empress' planet, Gigas Nisus. Empress befriends her immediately, and Necro - who remains unknown to the world – accepts it. Necro doesn't fully understand the world, but finds herself caring for the neglected kudu, going into the town at night to find food, clothes, and so on. She becomes a motherly figure to Empress.
​Empress learns to work hard and knows she wants to change the world as she witnesses the things her father's gang does, such as theft, violence, and overall making the world worse. She's too young to fully understand it, but she is motivated.

Empress' grows to 5'10" quickly at the age of 13, and tries to stay educated. She respects Necro and does her best to handle her home abuse. Her mother disappears at this time, and Empress' is unsure if she was killed by Rising Sun anonymously, or simply abandoned them. Her mother taught her to not be attached and to not forgive, and without solid reasoning, Empress listens, forcing herself to the best of her emotional ability to not miss her mother, and to not forgive her.
Empress has a soft spot for children and the elderly and spends time volunteering to help them. This helps her to want to stay in school and educated so she could help those who abuse them, and also gets her out of her home life. Empress' room is in the attic of her family's house, and Necro frequently climbs in through the window.

Rising Sun, after the disappearance of his wife, begins to question his reality, with paranoia seeping into his life. He sometimes won't eat out of fear of being poisoned, and won't leave the house for weeks at a time. Slowly, the gang falls apart as he refuses to interact, not trusting his members.
At 15, after Necro one by one begins eating the enemy gang members to the Rising gang - all of whom abuse and are cruel - Rising Sun suspects Empress of foul play. He comes to kill Empress, but Necro kills and eats him, putting Empress in charge of the gang quite early. With Necro's help, alongside others, she falls into ruling and reshapes the gang to help the innocent and to be a good gang. It's difficult, as many members are gone and some remaining are cruel. The financial struggles are large, and she is prepared to fail. Piece by piece, though, she begins putting it together, realizing some illicit activities can help her, such as selling drugs (that she attempts to source from clean dealers), as well as running prostitutes. She rescues children, the disabled, elderly, and puts them in facilities ran by her gang to keep them safe. She has enemies, she has friends, but most important to her is that she has Necro, who guides her.

Empress' life is the same as a teenager. Rescuing the innocent, making money, and trying to live her life. During this time, she meets Veiled Providence.

MORE TO COME AS THIS DEVELOPS

Empress is very emotionally stunted due to her trauma. She suffers from borderline personality disorder, with the most prominent symptom being her splitting between love and hate on herself and others. Although she does good things, she is very unforgiving, vindictive, and hateful. She is overall a miserable person and to many, unlikable, even for what she does. Empress' is a bit aware of this and is trying to better herself, but due to all the horrors she has seen taking care of the abused, she finds it VERY difficult to be positive and think the world has any chance to be better. She is a bit edgy in this sense and tries a bit too hard to have a 'badass' persona at times. She does love her friends dearly, though, and for all her negativity, she will do anything for those she loves and for what she believes is the right cause. She has no problem working for weeks on end to support herself and others, and loves a good work ethic.

Empress has a notch in her left ear from an attack of the rival gang when she was a kid.
She reached her full height of 5'10" by 13.
As noticed in pictures, she is a female kudu, but has small, stunted versions of male horns.