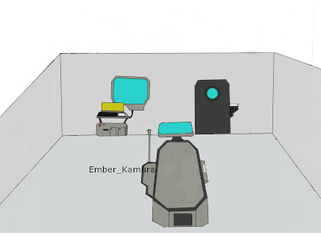 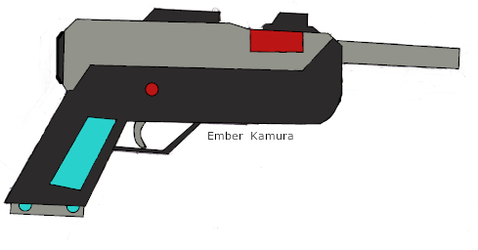 Here's another little bit of art, this time of an SMG that you will likely see a lot of in my works.

Originally developed by Akunov Armaments as a personal defense weapon for Darkwolf officers and exploration teams, the L2 is most commonly used as a sidearm for sharpshooters, pilots and security personel, while some advanced models are sometimes used by the Wolvan Special Operations Command due to it's efficiency. The weapon is usually seen in close-quarters battles taking place in urban environments, small buildings, and inside space vessels, usually in raids against dissenters and rebels, though the reliability of this weapon means that they fetch a high price on the black market, should they somehow be obtained in working condition.

The L2 is a powerful sub-charge gun that fires directly from a 800 charge HEL-280x power cell, mounted on the underside of the weapon. Though alternative variants exist, the most common type of projectile fired from the L2 is a high-energy plasma bolt, coupled with it's rate of fire, it is able to tear through heavier tanks in moments, or able to mow down a large group of hostile soldiers.

However, one disadvantage of this weapon is that it generates a high level of heat, mostly due to it's ammunition type. In order to discharge this heat, the weapon features it's somewhat iconic red, rectangular heat-dissipation device on the side. Though operators are recommended to wear Thermal Gloves when firing this weapon, alternative models can have specialized covers. In addition, an uncovered vent can occasionally be used in a melee brawl, though this is usually only used as a last resort, as most operatives typically carry some form of melee weapon.

One may also notice the apparent lack of fire mode control, this is simply not the case, as if the safety is pushed all the way to the left, the weapon is unable to fire, but pushing it to the right can allow for burst-fire, semi-auto, and full-auto. This ensures that minimal space is used in manufacturing this weapon, making production just a little easier.

The standard model is usually equipt with a pre-attached electronic sight, along with an extendable stock. Though, it also has hooks to support an optional sling, and can easily accommodate attachments such as laser sights, rangefinders, grenade launchers, disintegrators, bayonets, and more. Had it not been for the L2, the DSF would not have completed quite a few operations, as the power and reliability of the L2 is greatly appreciated among the Empire and it's allies.

Feel free to favorite and comment! Any Critique helps!