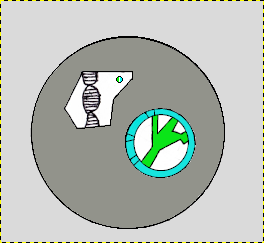 The metallic collar around Vincent's neck felt as tight and constricting as one would expect. The discomfort felt as if though it had been designed to occur in a very specific manner, one that almost made him want to vomit. It harshly choked him every time he attempted to get too close or too far from his handler, and it felt beyond uncomfortable. A very small bell was on the collar itself , perhaps it served a practical use for when the rod was detached, or perhaps it was simply for added humiluation. Such devices were just ony of many physical tools that the Wolvan used to keep control over their cruel empire. Vincent was slowly moved out into a hall, the wolf holding the rod would keep him in place, while the other went around his back.

"Hold still..." The one behind him said, "Or else we're going to muzzle you too, understand?" the other finished in a mostly stern tone, although there was a faint sense of mockery in the air as well. Vincent made a slight growl as a blinder was brought over his eyes, a mere piece of metal with a strap to keep it secured. In no way was it intended to be comfortable, but the darkness, for some reason, to Vincent, it almost felt as if he belonged there...

It was only a moment before the Soldiers would retract the rod length a little, making it easier to fit it down the hallway. Vincent grunted as he was tugged along once more, having no choice but to go down the hallway with them. He felt mildly terrified, and the added loss of any ability to see what was going on was easily adding to that terror. Be shook in fear but continued on, doing little to fight back as he didn't know what that would lead to.

The two Wolves were close enough for him to make out a few key details however. During the breif time that he saw them, they wore a mostly grey suit of armor that covered them from head to toe. It consisted of multiple plates, attached to some sort of bodysuit in a way that made it difficult to shoot in between the gaps, but open enough to allow movement. It seemed that they looked large and broad, implying that the wearers were likely males. The head was very similar to that of his own, so he merely assumed that it was somehow related to his species in some way.

Although he could not see, the walls were a slight grey that just barely contrasted with the armor  of the guards, and dome-like lights were occasionally sighted on the cieling. The floor felt metallic, but smooth and polished, with a grated floor occasionally running down the middle of the hallway. The soldiers were both in front of and behind him, and were obviously not very tolerant if he came even close to tripping. The one in the back was giving him agressive nudges if he went too slow, added to by the tightness of the collar.

Vincent was led into a small, dark room. Being led into the center and onto a plate of some sort. The collar around his neck would suddenly open up as it was removed, and Vincent immediately made a short gasp for air as constriction around his throat was suddenly relieved.  He would never take breathing for granted again, and It felt great now that it wasn't being in the verge of asphyxiation . "Stay right there, don't move an inch. This'll be over a lot quicker if you cooperate." Vincent perked his ears up and opened his snout to answer, but the two of them had left before he could say a word.

He was left alone in the darkness and silence of the room. It reminded him of how he started out, simply floating around in the fluid he was grown in for longer than he could remember. It already seemed like a distant memory, or perhaps a dream, even though it was only a few minutes ago. Vincent quickly pulled the blindfold away, tossing it aside. "H-hello...? He asked, yet he did not immediately get a response, for a moment, he was truly alone.

The short moment of silence was then broken by a voice over the intercom. "Hello there, Vincent... How are we today? I apalogize for the poor accomidations, but I'm afraid that I have little control over them." , The wolf backed up in fright, but this was exactly their intention. He ended up pressing his back to something cold and metallic like the collar was before, but before he could turn around to find out what it was, four clamps would wrap around his back, meeting together in the center of his chest. This was followed by a whirring noise near his head, although the source of the noise came from an angle from which he could not see. Vincent briefly struggled for a moment "W-Why are you... Doing this...? Don't hurt me, please..." Vincent pleaded, attempting to pull out of what seemed to be a mechanical harness of some sort.

For a moment, there was silence again, a moment for him to focus, enough for him to know that something was nearing him, it sounded mechanical, sinister... 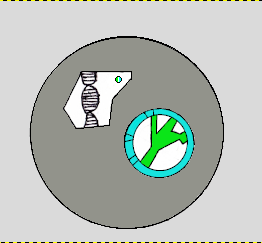 Having slept throughout his Growth Stage, a Genetically Engineered wolf known as Vincent is awakened from his slumber and cast into an entirely new world. Will he adjust and adapt? Or fail like the predecessors before him?

And here's Chapter 4! I'll be sure to keep what happens within SFW Rating to the best of my ability. It does seem like Vincent's in a bit of a bad spot though! Will he make it through? And what are his Creators planning to do with him? Find out next time!

Any Critique, Comments, Favorites, or anything else will help greatly. I'm always open to suggestions for the story!

And yes, this was imported from my FA. All involved stuff belongs to me, including the story itself.