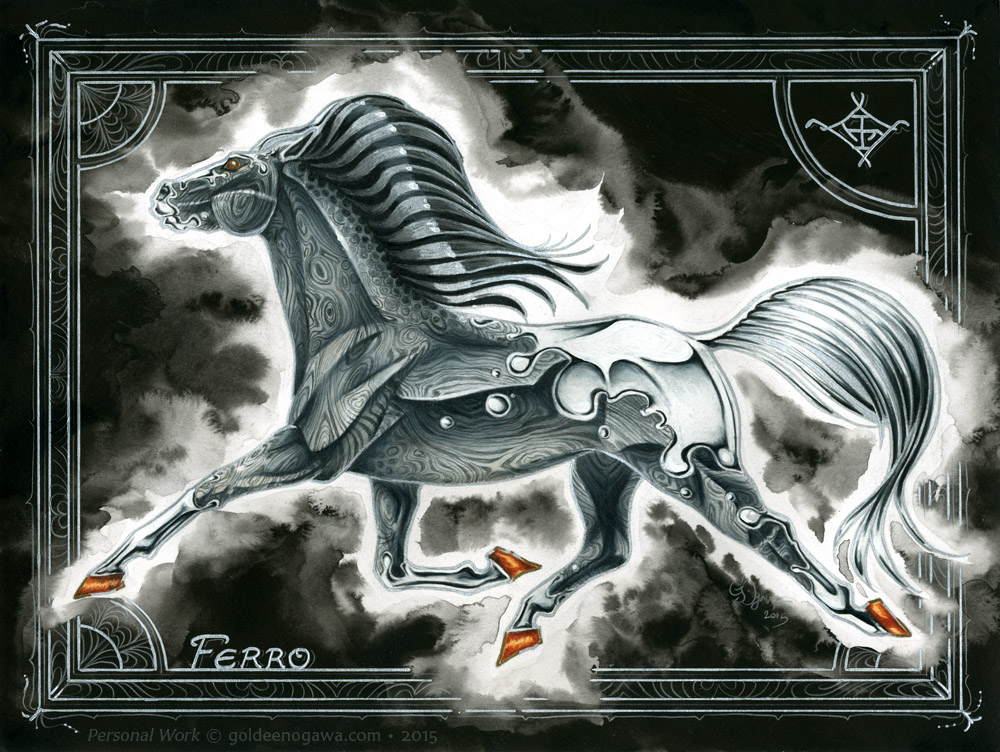 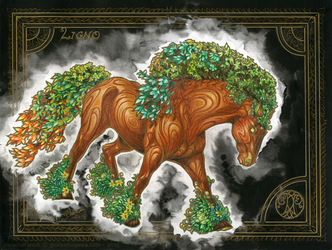 Last year I was commissioned to do a series of Elemental Horses based on the four classical Greek elements. Ignis (fire), Aura (air), Aqua (water), and Terra (earth). They were themselves done in the style of my Planet Horses (Jupiter, Saturn, Ouranos and Neptune) from 2013. This year, I’m revisiting both series, beginning with the addition of the two missing classical Chinese elements (wood and metal).

Ferro (technically steel, but here used to represent all metal), is mostly damascus steel with a healthy dollop of mercury, bronze hooves, and golden eyes. I chose damascus steel because I felt the swooshy, almost organic patterns contrasted nicely with its form as the strong, sharp blades it is usually used for. The mercury represents the fluid, flexible nature of metal, and I’ve draped it over the form of Ferro in a manner reminiscent of an Appaloosa’s blanket. For the horse I drew inspiration from the gaited, trotting breeds, notably the Standardbred. Horses are often depicted at the canter or gallop, as those gaits tend to lend themselves well to beautiful, dramatic poses, but for this final installment in my elemental series I wanted to highlight the grace and power of that often over-looked gait: the trot.

Mixed media: black ink and watercolor, colored pencil, and silver paint pen. Ferro’s sigil is, like those for fire, air, water, earth and wood, of my own devising. In this case, however, I have incorporated elements of the Chinese character for metal in the Wu Xing, 金 (jīn). Original will be for sale at Further Confusion later this month.