The church of vengeance by Eldanoth 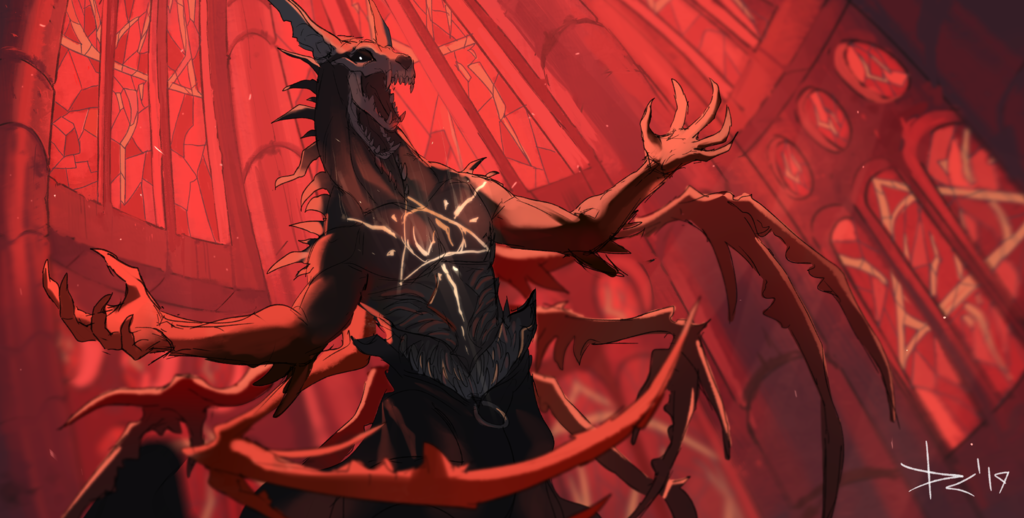 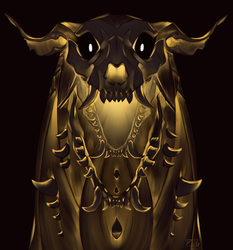 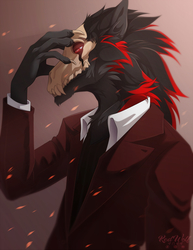 The church of vengeance

Religion, you never really cared of it, though you believe, you never attended any gatherings and such. However, as the years passed, news of a new cult was creeping in, nothing big, people didn't really paid attention to it nor did any higher forces took action to stop them, seemed they weren't that a big of a deal.

It all really started when they started spreading. You heard things about them, the ones deep into the cult wearing red robes and having some kind of triangular symbol. Their texts looked like small lines and curves. What was most strange, wherever there had been a murder, they seemed to appear within days. They didn't tell other people about their church, handed out their texts, they only visited the people who lost their friend, loved one, child or whoever in the incident. You found it strange, perhaps they were the kind that comforted those who needed it but again, you dismissed it, you had better things to do.

Then it happened, in the years that had passed, you got married, got kids but that was all taken away, they were killed during a robbery that went out of hand. While you were still mourning them in the days that followed after, there was a knock on the door. Rubbing your tears away, you get up, open the door and there they were, robes of red, the strange symbol. You had forgotten about them but now that they are right in front of you, you seem to remember everything you heard about them.

They talked to you, as they do, you check their faces under the hoods. From the looks of them, they seem like normal people. The usual conversation happens, telling you they are sorry about your loss, the usual but then they say something different "Would you take revenge on the ones who killed your family?". It takes a moment to progress their question but you nod. Smiling, one of them hands you the symbol of their cult. They told you that when you felt ready to get revenge, to put it around you neck and it would guide you to their church. Without further more explanation, they got up and left, leaving you alone in your home, holding the symbol.

The next few days, their words seeped in and your feeling for revenge, to get those who killed your family grew. Then, after having bought a sword, you hung the symbol around your neck with some rope, got out and started walking. Time seemed to fly as you walked down the road, passing people, houses and trees, until you stood before a large church and one thing quickly stood out, all the windows were red and had the same symbol worked into them. One of the red monks greeted you at the doors before pushing it open, letting you inside.

The inside was almost like it was pulsing with the color red, due to the colored windows, covering more on the inside in the glow. As the doors closed behind you, more red hooded monks gathered standing around an heightened red stone slab, engraved with the symbol.

Suddenly there was the sound of muffled voices, chains and dragging. Six monks brought over three bound people, sacks stuck over their heads and were placed on the slab before the sacks were removed. Like a surge of lightning, your eyes go wide as you see their faces, faces that are engraved into your mind, these are the ones who killed your family, letting out angry grunts and let out loud muffed sounds as they were gagged with a thick rope and cloth. Clenching your teeth, you look at them with hate and the lust to make them suffer for what they did. As you made a grab for your sword, one of the monks stopped you "While I love to see you take your vengeance, please, let us prepare them, when that is done, they are all yours". Angry as you felt, his voice calmed you down just enough to let your sword rest for now.

A bowl was brought over with a white substance, it looks like a thick liquid as a different figure stepped from the shadows. This one was wearing black robes, wearing a silver necklace hanging from it the symbol in white gold and had the symbol colored in white on his back, a priest perhaps but surely one standing higher in rank. He dipped two fingers into the liquid while some other monks held the murders firmly. Walking over, he drew the symbol on each of their chests. Another bowl was brought, this time the liquid was black. Dipping his fingers in it and returning to the murders, he drew lines down from their eyes to the jaws, making it look like they were crying. The bowls were taken away as the priest turned to you, giving a nod towards you before stepping aside "They are yours" he spoke in a deep voice that seemed to echo through the entire church and your body.

Drawing your sword, you slowly walked up to them, your anger, rage, hate quickly rising as the adrenaline rushed through your body. They struggled and let out muffled screams as they tried to break free from their bonds as the monks and priest watched you. Standing before the first, your fist clenched tightly around the hilt, as you look with hate filled eyes at him. Looking back, his eyes widened, recognizing you "This is for my wife and children" you roar before you drove your sword into his chest. He screamed in pain as you pushed it deep into his chest, blood quickly oozing past the blade. Roughly pulling it from his chest, he groaned loud, shaking as blood poured from his wound. The other two got even more frantic, desperately trying to escape, pleading for their life through the gags. You moved to the next one and looked down at him, then at the one who was still shaking a bit as his life quickly ebbed away as he went limb. Looking back again, you pushed the tip again his chest and you take notice where the symbol was drawn at, right over where the heart would be. Smiling you again pushed your blade into his chest but slower this time. He screamed and shook his head as you kept pushing it deeper and deeper. Tears of pain rolled down his face, mixing with the black liquid, turning them black. Again, you pull the blade out roughly, twisting it, creating a more open wound before you turned to the last one. It seemed he knew there was no way out and from the looks of it, he had wetted himself as he looked in fear as you approached.

Reaching out, he flinches and closes his eyes, whimpering loud as you remove the gag. Slowly opening his eyes, he looked up at you "I'm so-" his next word came out as a gurgle as you slit his throat. He sputtered and trashed as was drowning in his own blood. You kept watching, feeling relieved, happy you got the ones who caused you such pain and loss.

As the last one died, you walk off the slab and drop your sword, shaking from what you just did. Two monk supported you as you felt your legs couldn't hold you anymore and turned you around to the three now dead killers. Then, something happened, they all shivered, groaned before pushing their chests forward. The previously drawn symbols glows up in a bright white light and their ghostly figures rose out, still bearing the mark "The marked are slain and vengeance is done" the monks all said in unison "Their souls to take and be consumed in your wake". As they spoke the last word, the symbol on the slab glowed brightly for a moment, blinding you. When you could see again, your eyes widened, this time it was with disbelief. The being before you was none you ever seen. It's limb grabbed the ghosts of the dead and moved them towards his chest, where the symbol was clearly glowing. As soon as they touched the symbol, they were being pulled into it. Their wails and struggles were short as they quickly disappeared, consumed by the being, no, this was no mere being, this was a demon, there was no denying it.

When it first spoke, it was in some infernal language you didn't understand but seemingly, the monks and priest did. Then, turning his gaze, he looked at you and smiled before spreading his arms and limbs out "Welcome, my child" he spoke with a voice that send shivers through out your body "To the church of vengeance".

Eldanoth belongs to me©
This amazing piece artwork was created by the awsome https://www.furaffinity.net/user/fjorge seriously check them out !!!