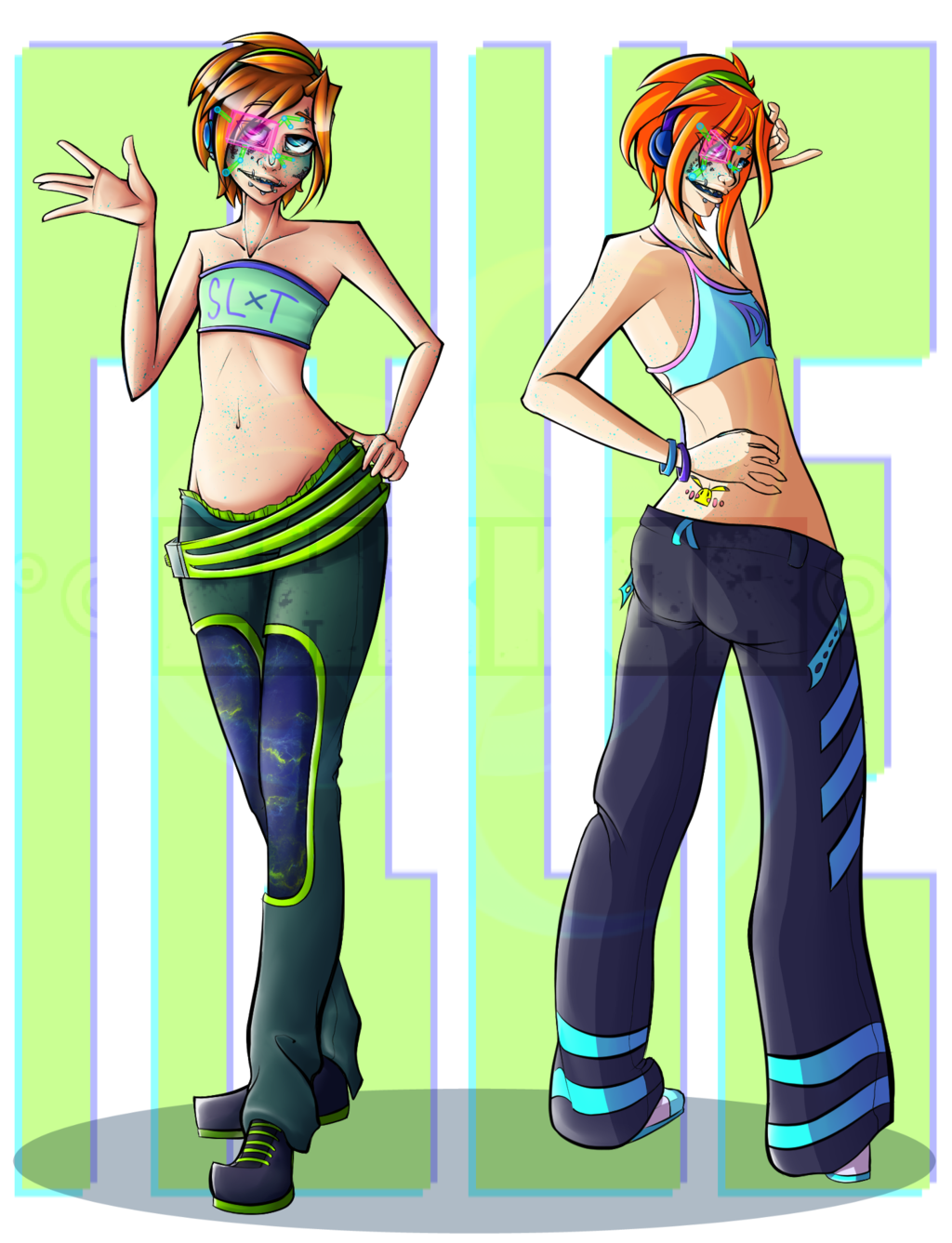 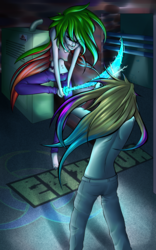 Enjoys loud electronic dance music, becoming intimate towards those he's closest to, having multiple sexual partners, getting high with his drugged up mates, long walks with friends. Dislikes people trying to tell him how to live his life, feeling like he's being controlled or having someone trying to control him, spending long periods of time alone with his own thoughts, receiving criticism about his drug habits from others, confrontation and/or conflict of any sort.

His mother passed away due to birth complications of an unborn child around a year before Niue was born. His mother and father had made a conscious decision to preserve nearly half of her fertile eggs for they feared something would happen, as she had complications in earlier pregnancies. His father was one of the highest ranked military personnel of the GYK: Deland region, and because of this, he had access to equipment that most others had never even heard of before. Niue was a test-tube fetus, and he was observed by medical practitioners and scientists during the growth of his first 10 months, up until the pregnancy period would be over. Because of his father giving the opportunity of observation, he was granted a somewhat large sum of money per month, set to be given to his family for the next twenty-five years. For his entire life, Niue had Al to lean on as an honorary member of the family. Al and Niue's father had both agreed to speak little of his mother if at all around him, as they didn't want to raise questions. However, this plan had failed as Niue got older.

Due to the raging war that had been going on, Niue's father had been sent to another part of the world. Being six at the time, Niue was left in the care of Al, who had been hiding his drug addiction for years, claiming the substance was his "medicine" in hopes that would keep Niue away from it. Throughout his father's departure, Niue and Al were devoted to keeping in touch with him.

As a child, Niue was fairly late in his social skill development. He didn't spend a lot of time with other kids outside of school, and even during class time, he was very distant. He was quite anxious all the way up until he was around nine, almost ten years old. The only person he really felt comfortable socialising with was Al, and he was quick to take notice of this. Al tried to push Niue to spend time with kids his age in hopes of strengthening his social skills, but it was a tactic that wouldn't work on its own. It wasn't until Ryu, Terry, and Allison at the ages of eight, nine, and ten approached Niue, who was eight years of age at the time, had he began to associate with other kids in his area. It didn't take long after that before all he wanted to do was go out with his friends and participate in activities all the other boys did.

Outside of school and friend activities, Niue had formed a passion for music at a fairly young age. He was especially drawn toward trance EDM and the hard dance subgenres. As soon as he had his hands on a computer, he spent all of his free non-social time playing with different programs and creating different sounds. It wasn't long before Al took notice Niue's admiration toward technology. Soon enough, he started teaching him how to modify installed programs and code his own, eventually teaching him everything he knew about computer programming and hacking.

Niue was 10 years old when he began to experience forms of body dysphoria. He didn't say anything about it to anyone for quite a while, it was something that made him feel extremely uncomfortable. After doing some research, he began to grow a better understanding of his situation and he managed to work up the courage to talk to Al about it.

Around the same time was when he found Al's stash of "medicine" after catching a strain of a common illness, and he became addicted instantly. It wasn't long after, Allison had disappeared without any warning. For the next two years, he stole small doses of crystal meth from Al for his own consumption. This all went on without Al noticing. Niue kept this a secret from everyone he knew. He never told any of his friends, and they never noticed anything out of the ordinary until he started getting sick on almost a daily basis due to higher doses in which he was taking the drug at. When he was confronted about it, he avoided his friend's questions at all costs, until Al eventually found out about it. At that moment, Al began to financially support Niue's amphetamine addiction along with his own.

Shortly after he hit thirteen years old, Niue had participated in a technological experiment Al was conducting. Despite the numerous times, Al had explained the potential dangers, Niue wanted to be the one he tested on. So Al went and backed up Niue's memory on his 20000tb supercomputer hard drive before performing the experiment, in case anything happened. Sure enough, after hooking up electrodes to all sections of Niue's head, he began to send pulses of electricity into Niue's brain, increasing the intensity notch by notch. However, the experiment went horribly wrong when he unintentionally fried Niue's brain, leaving him virtually brain dead. In a panic, his older half-brother TemT was called over to assist in fixing him. They spent the next three days straight surgically inserting wires and a high-powered microchip, complete with programming to mimic the brain's functions. With that, Niue was functioning properly again, and with other advantages. The USB hub on his upper back comes with a waterproof, airtight-sealed door, the headset attached to his ears province an advanced auditory experience, and the artificially manufactured right eye under the pink glass gives him the ability to see colours that he wouldn't be able to see otherwise and enhances his overall vision.

This incident brought Niue much closer to Al than he was before, and he began to gain romantic feelings toward him. However, despite the fact that he was more than willing to expose these feelings to Al, they never were reciprocated in the way he had expected. It wasn't long before Niue had settled with other sexual partners, having lost his virginity to Terry at a rave about half a year after the incident. A year or so later, Niue had regained connection with Allison, and he started a friends-with-benefits type relationship with him, often sleeping with him in exchange for drugs.

After reuniting with Allison and seeing what the multiple different substances He had been living off of for the past two to three years, the two decided to go to rehabilitation treatment together. Niue left after a month, Allison after almost three. Remaining sober wasn't an easy task for him, drugs taking part in his life no matter where he went. Once Allison relapsed due to his severe drug dependency, Niue did so as well, almost instantly upon hearing about it. Unlike Allison, Niue was overall fairly content with the addiction he was living with, and he enjoyed feeding it. In a sense, it made him feel more like an adult.

By the time he had hit fifteen years of age, Niue had become somewhat of a legend in his area for what he did in the music industry. He was DJing at clubs and even adult-only events on the weekends, which provided him with extra cash to support his addiction as well as upgrade his computer software. He had become highly skilled in both digital music production and computer programming. For fun, he and Al would hack into online games and modify them to extreme lengths right in front of the other players. He caused chaos over multiple gaming servers and had even been banned on some. However, he was never banned from servers for long as he could easily get into the database and remove himself from any ban-list.

Over the course of the next few years, Niue had gained multiple sexual partners, even trading sexual actions with Monstrum for home-cooked methamphetamine for both himself and Alijiah. Niue's dependency had become so bad, he dropped out of his final year of school at age 17 after having the threat of expulsion directed towards him due to his drug use and low attendance. At this point, he finally managed to coerce Al into performing the actions on him he had desired so much during the past four years.

At the age of 18, Niue met Skitzel who was 17. Unlike some of the others in the past, a romantic relationship formed between them. alongside Niue's hyper-sexual nature. Their relationship became extremely tense, especially after the three-month mark. Skitzel couldn't stand Niue's addiction and Niue couldn't keep to a monogamous relationship.

Multiple times throughout their relationship, the two had a variety of arguments, all of which were about Niue's drug habits and promiscuous activity. The end of their disagreements were all relatively the same. Niue would run off to the tech shop Al ran and lived in, and he would hide out there for a couple of days, and Skitzel would stay in the apartment or head out to TemTs for roughly the same amount of time. Their relationship was extremely dysfunctional, and matters only got worse when Niue started keeping other activities secret.

Niue and Terry had been rave-mates for a number of years. The two started going to parties together when he was thirteen years of age. They had formed more of a casual relationship, occasionally sneaking off to less densely-populated areas at these events to perform on each other. Over the years, they started doing this together much more frequently, especially since Niue often DJed for the events.

Niue is an original character, canon to the Void 9 universe and story. All Rights Reserved.
Cyodai is an original alien species designed and owned by me. if you wish to make your own, please note me. Thanks!
Drawing © EhX-KoR