Momotaro's Dog by LordDirk by ehh123 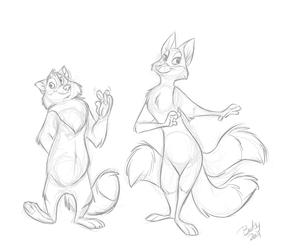 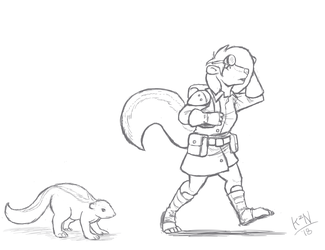 Livestream commission. Anyone familiar with Japanese folklore will most likely know the tale of Momotaro. The basic story is that an old couple find a giant peach and slice it open to reveal a baby. The baby grows up to be a strong and athletic boy who the couple named Momotaro (peach boy). One day, Momotaro learns that Oni (japanese ogres/trolls) are terrorizing the land and he decides to stop the threat by going to the island where the Oni live. On the way, he meets a dog, a pheasent and a monkey and he convinces each of the animals to join his quest. Together, the four get on the boat and sail to the island. They all fight the Oni and win. It ends with Momotaro and the animals returning to his village triumphant with all the treasure they had plundered from the island.

There are illustrated versions of the story where the animals at first look normal but then become anthropomorphic and wear clothes once they join Momotaro's party. I always found that amusing. I also notice that some versions had Momotaro giving the animals dumplings in exchange for going with him on his quest. That gave me an idea: What if those dumplings were enchanted and turned the three animals into anthros?

Here we see a dog (in this case, a Shiba Inu) being transformed after taking a bite out of the magic dumpling. LordDirk went with a children's book style for this and I think it works well.