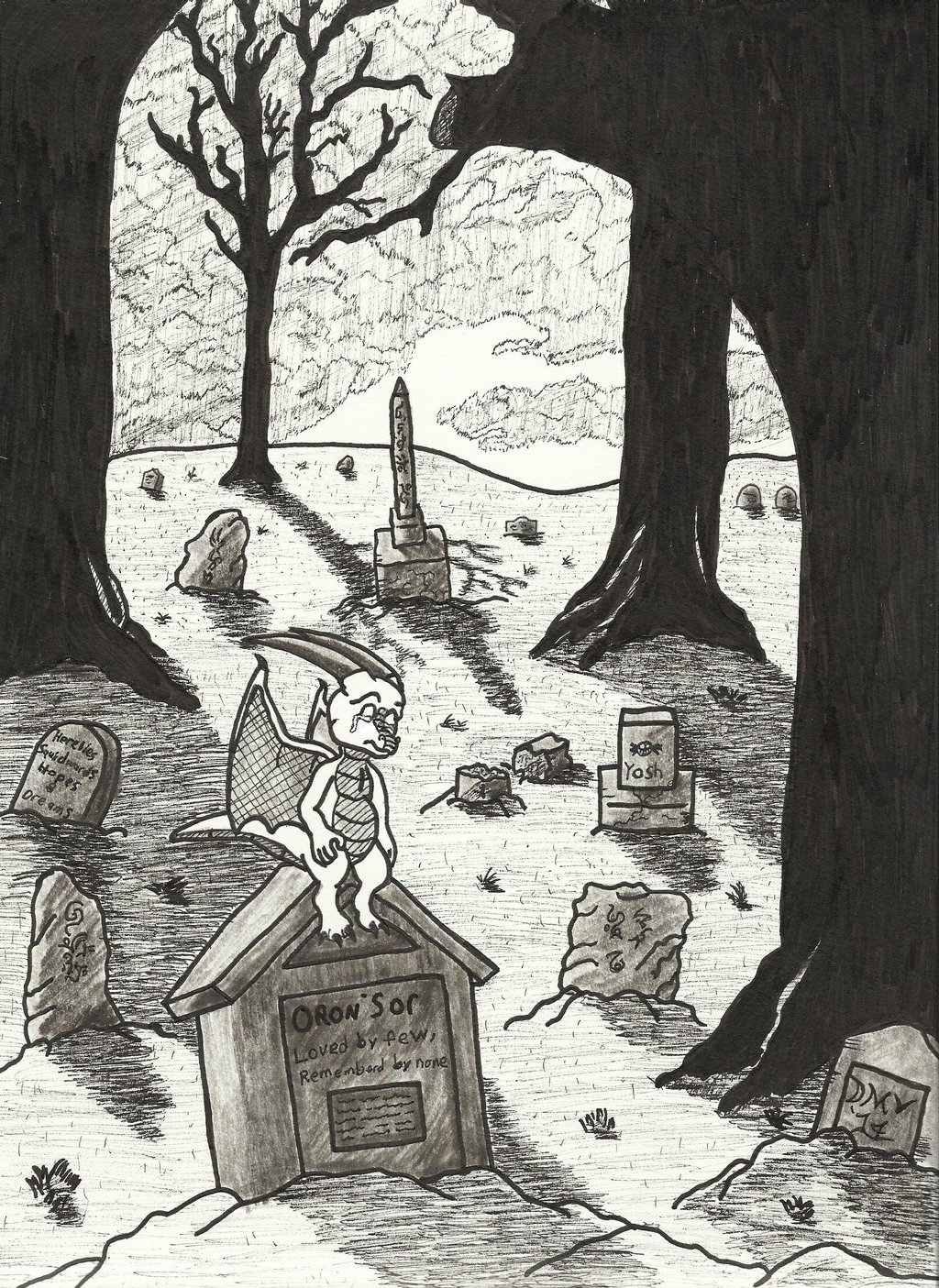 "The worst of dates in all the year for me. Every year upon this day I feel the same pains, the same wicked memories of nearly being executed by someone I had trusted and cared for as a child. To have a reminder of that kind of trust betrayed, is a torment that festers over the ages. To be so close to death, to feel the cold grip envelope your body, then the stirring heated grasp of death itself. Such a burning fear, yet all around you it is cold, but having that death reach to you, in the cold, burns you down to the core. An icy burn that you can never forget.

'Such as the memory of betrayal and hatred that shadows you your entire life. A wicked echo of many laughs, onslaughts, and torments that build up with each echo. Growing louder and louder and each echo sounding slightly different from the last, yet the message is all the same. I often wonder, will there be echoes of such hatred in a grave?

'I visit this grave sometimes in secret. Forgotten over the ages, and abandoned, no one knows of this place anymore but myself. I am here, atop the grave marker of someone whom was my best friend during life. I sometimes come to this friend, even in death, knowing well he is not here, so I can at least have the memories of himself and myself to calm me and keep me company this day. However, the calming is a sad calming, since I add more sadness to this day with his memory, as well as the memory of how I was the one who had to kill him.

'I was the one who had his parents fall in love. I was there when he hatched, I watched him as a child, as a young man. We were friends, we were close. I had to watch him change, change into something wicked. I advised him to stop hanging around that group of degenerates; they warped his mind, pushed their views on him. He started to murder, slaughter, despite my attempts to reason with him since I knew the truth, he simply refused to listen.

'It came to the point where the souls of an entire star system were in jeopardy due to his meddling. It came upon me to stop him from using the weapon and I went to him in a warehouse. We talked, and during that conversation, I saw a glimpse of my old friend again, misted behind the shadows of corruption and hate. I reasoned with him as best I could, he appeared he wanted to be saved, though some false sense of pride and power pushed him over the edge. My last words of reason to my friend was a plea, begging not to force me to kill him. He snarled, nor caring about his own death, that was his plot the whole time, to kill himself as well as far too many others.

'I had to do it. And I chose to do it in the fashion as I have done to other betrayed friends I had been forced to execute in my past. With a glare from my eyes, a deadly beam of light to his head, and the dragon fell, silent. He did not give me time to say goodbye or warn him. It was a cold execution, done by me. Something I hated to do the most, kill a friend.

'I screamed in frustration, watching as his soul was taken. I disposed of the weapon, and with a heavy heart, informed his parents, my friends, of his execution. This was not the first time I have been forced to kill a friend, nor was it the last. It is a pain I hate the most, more so then that of my own birthday.

'He was buried here, his stone saying he is remembered by none. His actions left him with the scorn of a faded memory. None would remember his good side, the dragon he was before he was corrupted. Often i feel as though I am not remembered due to lack of prayers in my divinity. Though I still remembered my old friend, and I still visit his rotted corpse, knowing well he is not there, I still visit to honor the memory of his good side.

'I would rather spend my birthdate thinking about the memory of my late friend, then think of my own past. The pain may be more, but since he was a friend, I still honor it, and it distracts from my own self. The wind is cold as it blows across this field of death, this shadowed grave all but forgotten. I am all whom remains who remembers him, his parents long gone, I am the only one who keeps remembering, especially in this cold place."

This years birthday picture Duo is in his chibi form in a graveyard visiting a dead former friend that he had killed. I was forced to do this one in a hurry due to lack of time, so the trees arnt that great and just pure black, otherwise I would have did more with the trucks. Plus I couldnt fix Duo in this form, but again lack of time and it still passes. Feels more like a halloween picture then a birthday image, but wanted to show a bit of the story behind Duo and Oron 'Sor which depicts a bit of a darker side to Duo, something Ive been wanting to show more of, but lack the time to doodle anything of it.

All done in ink, even the shading of the tombstones which came out kinda cool. I had to have fun with a couple of the tombstones, I couldnt resist. I wonder if anyone will get the references. Rated mature for the context of death and Duo's recount of the execution.