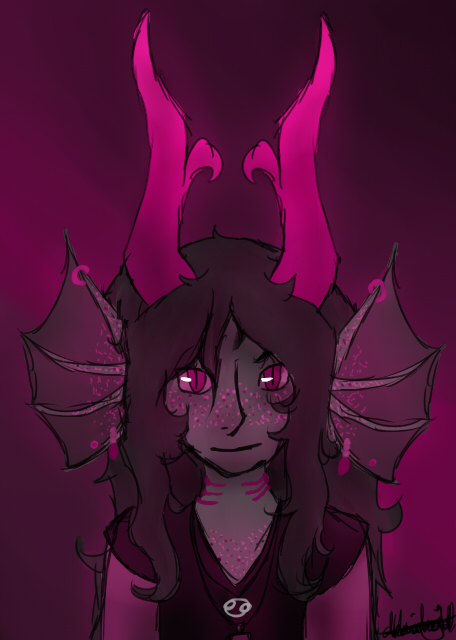 This here is Sayria's Ancestor, Serenade. Serenade is a seadwelling troll that once lived in the ocean before moving with her lusus to freshwater areas, A.K.A, the lake that Sai lives in now and the same lake with an island and massive tree that Serenade had built the hive upon, in, and under the water with. Serenade is about 3 or 2 sweeps older than both The Condesce and Dualscar and had actually reigned over Alternia for a tiny bit, or at least until Condesce came along and was old enough to take over. Then Serenade gladly stepped down as ruling was never her thing, guiding is, but just not ruling. Though she was considered an excellent ruler by many blood colors all around as there was no hemospectrum as she doesn't believe in blood color and sees everyone for who they are and will thus give them all a chance. Of course some "highblooded" trolls didn't like this and often lashed out but she always met everything with peace and without violence which is why she is, in her pre-scratch (dancestor) form, a Sylph of Blood. One who repairs and brings unity.

But Serenade had decided that the ruling life wasn't for her and stepped down for the Condesce but not without teaching the Condesce her ways and being a mentor. That was until the Condesce was almost an adult did she start deviating from Serenade's teachings and peaceful claims and started bringing fear and terror to Alternia. When this happened, Serenade had left as she couldn't stand watching so many be enslaved, culled, or just used for personal enjoyment. Serenade had also stopped singing in public as well which was how she got her Adult title in the first place was from her Serenading many trolls and soothing lots others with her gentle songs, mainly purplebloods that are in a blood rage or any troll that had lost someone dear to them. She would gratefully and kindly sing them a song from the heart and from her perceived perception on the other beings emotions and flip them. Unless you are already happy then she will sing you a happier song that will give you motivation to do that one thing you were meaning too.

This was made from one lovely post on tumblr that has you choose one color and then you can only use the colors in that hue. So I had done so with Serenade as a warm up practice and to draw her more.