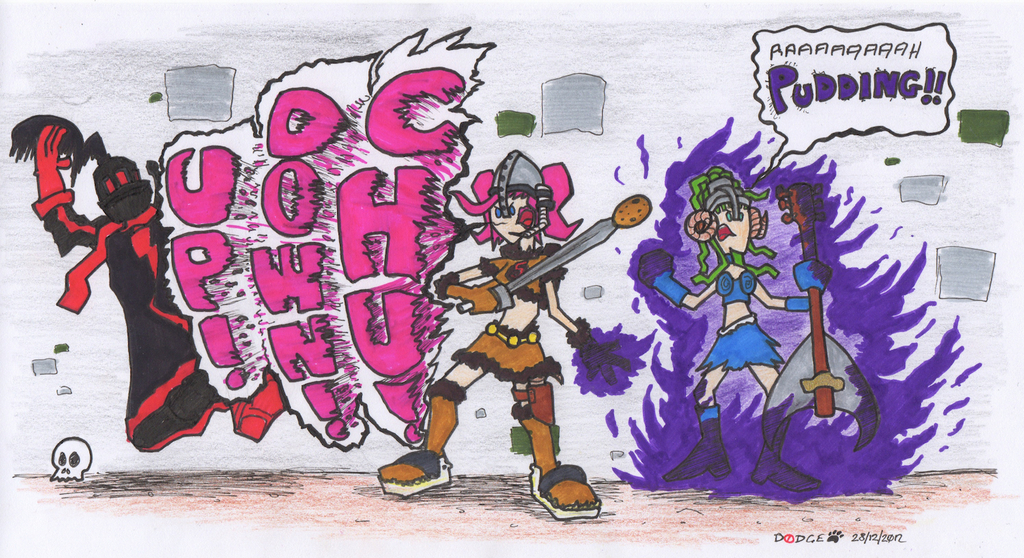 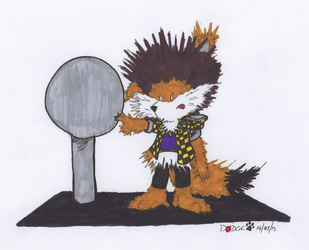 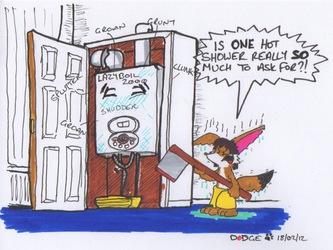 Behold the mighty Dovahkiin, Ulala as she uses her powerful Thu'um to vanquish the dreaded Shadow Priest in the curiously well-lit tomb, in the midst of battle, conjuring her Attronach, Pudding from the bowels of Oblivion!

My housemates have an unhealthy obsession with a godawful Sony game called 'Space Channel 5'. Their obsession has been rekindled recently by the main character's appearance as a playable character on the new WiiU game Sonic Racing Transformers (or something to that effect) along with fellow star of the game, Pudding.

They came to me, all giddy and gleeful and asked if I wouldn't mind wasting my evening producing a submission where Ulala was the Dovahkiin.

... I initially said no, because I hate Space Channel 5, and over the past week, the idea has not so much grown on me, but festered, and tonight, while I had a relatively empty schedule, I decided to give my hacking and coughing a short break (if only) and draw something for once.

I don't know Space Channel 5 well at all. I have only been subjected to the end boss three or four times for the ludicrous fact that Michael Jackson is in it for some reason best known to himself.

Points of interest in the drawing & Answers to Questions that may be asked:
-Ulala does not have a microphone, her Skyrim Nord helmet has a wonky horn.

-Pudding is holding an axe that merely resembles an electric guitar ... there's no electricity in Skyrim ... unless you count storm magic.

-Pudding is saying 'AAAAAAH PUDDING!!' due to her voice clips in the Sonic racing game obviously having suffered from a case of the "that'll do"s at the game developers' offices. Play the game. Play as Pudding, you'll see what I mean.

-That is a potato on the end of Ulala's sword ... as I couldn't think of anything else in Skyrim that would feasibly be afixed to a sword in an effort to have it resemble a microphone ... not that anybody in Skyrim would know what a microphone is ... ... ... shhhhhh!

-Ulala's shoes are normally platform boots if Google images is anything to go by. So, through lack of platform boots in the 'Rim, what's the next best thing? Sabre Cat Jaws!

I think that covers everything.

This ludicrous idea was brought to you courtesy of

Space Channel 5 is © to whoever at Sony/Japan smoked the LSD that day.
Skyrim is © Bethesda Games