Nice to Seat You ch 1.6 by Desmondfallout 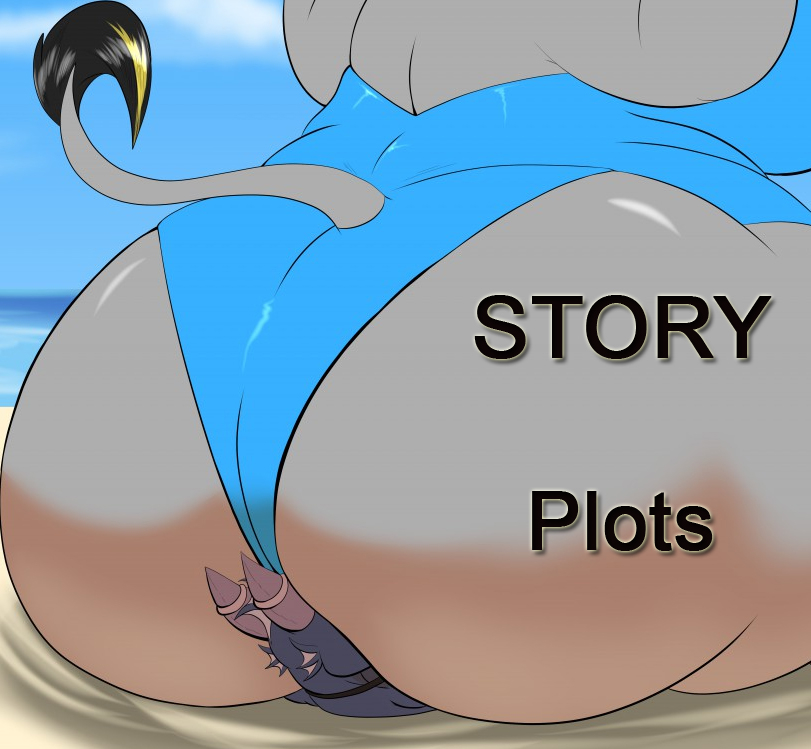 “S-sit with you!?” Lynda reeled like she had been hit, her feet digging long pits through the sand. “Oh, no. I couldn’t. I mean, I didn’t want to bother you too much.”

“Deep breaths, girl. I’m not going to eat you.” Tulip giggled. This was not her first flustered fan, but probably her biggest yet. She found Lynda’s shyness kind of cute. “Honestly, I wouldn’t mind some company for a bit. I saw you with a mouse girl, right? Will they get angry if you dawdle?”

“What? Yuki? Nah!” From her vantage point Lynda could spot Yuki’s galaxy-blue body easily. Eyebrows furrowed seeing the mouse two buildings down flirting with a four-tailed kitsune over ice cream. They both flashed a thumbs up when they noticed her watching, making Lynda’s trunk shake out a snort. Some people made it look so easy. “We had planned to chill here all day, so I doubt there’s a rush.”

“Great! Plop that rump down and get comfy.”

Hearing Tulip’s wholesome invitation while glaring at Yuki suddenly brought the mouses last bit of advice flooding back. It had been an obvious jest that overwhelming nerves could not help but see as a good idea. Lynda pushed down her reservations with a deep breath.

“Sure thing, Tulip! This is like a dream come true.” Lynda dug fresh holes in the beach, stepping up next to the spread dragoness. Sunlight glinted off the teeth of her huge grin. “Only problem is my friend has our towels. Would you mind if I share yours?”

“Um...I guess?” Tulip raised an eyebrow, confused by the elephant stomach blocking her sunlight. Her mind was too busy finding a polite way to phrase her response to notice Lynda’s slow turn. “Even if we shared I don’t think mine can cover much of your...what are you doing, Lynda!?”

“Just getting comfy,” Lynda giggled, shuffling a foot gently over Tulip. “Thought you might like a closer look at my swimsuit while you’re at it.”

“I, uh…” Tulip gulped with eyes growing wide as cup saucers. Before she knew it, Lynda was straddling her between massive foot stumps, gently shaking a butt that could fill her car’s backseat inches from her snout. Having once integrated with a tribe of overly friendly African hippo’s gave her a foreboding sense of where this was heading. “It’s v-very nice Lynda. You look super soft and round, er, snug looking. It’d be a shame to get it all sandy, right? Maybe we should find a bench inste-OOF!”

The flub had inadvertently brought doom down upon Tulip, rather literally since Lynda misinterpreted the words into rarely received flirting. She eagerly sunk into a squat that engulfed most of Tulip’s lithe body with gray pachyderm butt. It was gentle at first until Lynda felt the warm sands scrapping at her hips, at which point she let gravity assert herself fully upon her smaller heroine.

Air escaped out the dragoness’s lungs in a forced gasp as everything from her knees to shoulders became squished against the sands. Not the worst kind of sandwich to be in, just one she had hardly expected today. Squirming was only limited to minor twitches from her still free legs and tail, and if she tried to raise her head, it would smack the area right under Lynda’s tail.

Lynda giggled uncontrollably, glancing down at the tiny dragon legs poking out between her own massive thighs. Even she could tell Tulip was not intending to kick at her crotch like that, but it sure was not helping the situation. Her legendary hips undulated in response, digging up the sand around them in steadily rising mounds.

“Do you think the blue compliments my skin?” Lynda shot over her shoulder in the best seductress voice she could remember from movies. Now that she was over the nervous hurdle, it was getting hard to stop. So much stress from the past month of rude customers and fat insults pushed her motions into an aggressive drive. So many fantasies of smothering those jerks, or at least hip-checking a dent in their car, had pent up. It was great to have someone to vent on.

Tulip could not offer comment, since the rocking had wedged her face between Lynda’s gelatin glutes. The silent response did nothing to stop Lynda’s moment either. Each shift of the elephants rump pushed harder into Tulip’s chest, threatening to flatten her breasts against her ribcage. Despite this, Tulip’s arms spread across the wide rear span in a relaxed hug. Larger species were deceptively softer than they looked, to the point she could consider Lynda a living foam mattress.

It was the elephant’s weight Tulip would have liked a moment to prepare for. She could feel the sands enveloping her body after every hard buck Lynda drove down. The sands were rising in a high circle around the elephants hips blocking out what little sunlight Tulip had left. It was almost amazing how the cold grain worked great with Lynda’s warm blubber. They somehow created a perfect pocket for Tulip’s spinning senses to relax into a soft sleep.

“Uh, Tulip?” Lynda blinked out of her power rush, noticing the dragon's legs had stopped their movements for a while. A gentle finger tap caused the delicate scaled foot to twitch. Lynda scrambled to her feet, giving out a small cry when she whirled to assess the damage. “Oh, no… Tulip! Are you okay!?”

The plot of sand Lynda had been grinding now sank into a trench shaped like a kidney bean. Its deepest point easily went at least a foot deep, in which Tulip’s body laid splashed like a starfish. Her eyelids blinked out of sync with the weak bobbing of her head, trying to gaze back up at Lynda. With pained effort, Tulip eventually pulled her limbs out into a less clumsy heap, leaving a female outline in the compressed sand. 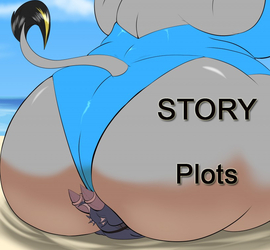 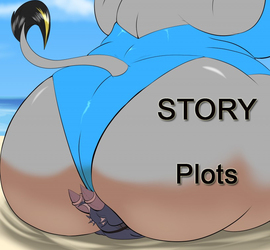 Lynda is an elephant insecure with herself and frustrated with life, but an impulse act of venting may end up turning things around.

This first set of episodes has been posted on my Patreon as a pre-release reward for $10 supporters, and will be released publicy in the coming weeks. I do hope you enjoy. :B

Yuki cameo thanks to blueberrysnow

If you like this story, please consider checking out early releases on my Patreon

Would love to hear your thoughts. <3