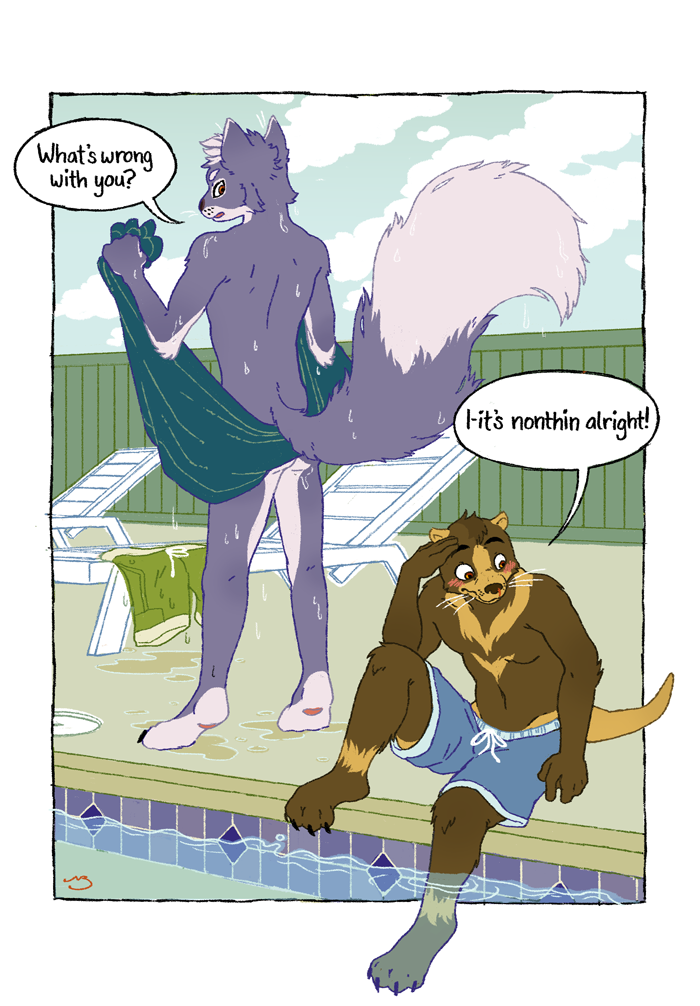 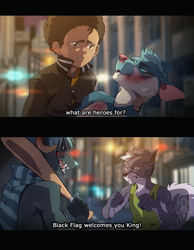 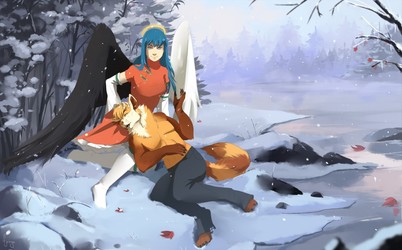 A Determined and Ambitious peanut butter colored otter Shouted self-encouragement within his thoughts. Staring at his reflection near a pool holding a large pack of alcohol wearing nothing but his blue shorts feeling chills slowly crept down his spine. A door heard opening behind him, eyes soon locked on a tall squirrel coming through the door shirtless, wearing his usual black pants leisurely waiting on the otter yawning and scratching.

"Pan it's late...What's so important it couldn't wait until the morning?" The squirrel grumbled.

Lucien halted. The sky was dark, the pool illuminated the squirrel’s amber eyes, his plum colored fur shined softly with his well-toned body visible for all to see. Lucien was nervous to find what was displayed in front of him. “This couldn't be real...Could it?” Approaching Tonto his face felt hot, ears turned red, he gripped his paw and confronted the squirrel.

"I told ya it's Luci- " He paused remembering why he invited him here at this moment."

"Pan what did you do? Listen, if someone's threat-"

Tonto stood silent, Thrown off guard seeing this shyly otter cease to not even look his way. Holding up the alcohol as if it was a carefully wrapped gift, so forward and random with his approach, he just took it all in without a word said. Immediately regret began sinking in Lucien. Embarrassed from spewing his thoughts out like some idiot...He took the squirrels long silence as rejection with no time he proceeded to walk pass him.

Lucien went silent. “Did he say prove it...with a kiss?” The tall squirrel leaned in close and it made his heart skip a beat feeling the squirrel’s snout blowing warm air softly on him. Lucien dropped the alcohol turning slowly, his paws held Tonto's head close and carefully.

Muzzles close, he wasted no time. But, he couldn't help but just enjoy the moment presented. In that moment felt he could probably say that he felt like a childish teenager being so awkward gifting alcohol, but he didn't care as long as he heard something, ANYTHING, it's all that matters. And with that, Eyelids shut he embraced the lips of another male he adored in front of him. The otter's body shuddered with excitement and of fear of what comes next.

His opened his eyes to see Tonto was gone. Suddenly yanked from behind a shadow of himself showed rage within those eyes.

"You’re such a Dumbass...your partnership will be done. He’ll reject you, hurt you, and hate you when he finds out. Like your family, so called friends, and yourself. Lucien’s counterpart grabbed his hair pushing him forward he fell in the pool. Immediately the otter went frantic, flailing his arms and legs trying to reach the top only to sink further and further. His vision blurred, everything was fading away until nothing was left except darkness.

Seconds later he awakened on a chair abruptly sitting up to see where he is. It was daylight, His squirrel partner relaxed in the pool, webbed paw pressed against his head realizing it was just a dream.

"Good. You're not dead." Tonto spoke.

"What did I tell you? I told you don't go swimming without me being here...You need to listen more."

It all became clear when Tonto lectured. Lucien found himself annoyed earlier but determined to learn today. Each day he always stepped in the shallow end of the pool, slowly moving until his feet were off the ground. He didn't want to do this or even say it even though it was clear as day when someone saw him...The otter couldn't swim.

"Hey check it out. Isn't that the otter that can't swim?"

Even hearing this, he always fought to beat this problem. When Lucien’s secret came out others laughed under their breath or even whispered. The squirrel wasn’t amused or feel the need to ask how is this possible. He simply approached and said. "There's a place I swim when I got time.It's ...quiet. Stubborn at first taking it like it was pity...eventually he nodded taking up on his offer.

"God this is stupid! I ain't getting this...I mean It's always been instinct for an animal to hunt, stalk, or even swim in no time at all right? Why cant I get this!?"

He groaned. "Just cuz imma Otter don't mean I got to swim, but what the hell...Think I Should quit.”

Three days... In and out Lucien trained with Tonto feeling as if he's having very little results from it. Tonto began to float on his back listening to his frustration of wishing to get better so badly...with other aquatic animals laughing at him, he could see why he pushed himself even going overboard.

"Remember when you ask to be partners? Day and night you'd ask me...I’d refuse. Hours later I saw you again. Otters’ were jumping on you left and right mocking you and the way you fight.

"Remember what you said after?"

Lucien shrugged. Never telling the real reason he was a target. He was reminded of his companions’ he once called friends, found out he preferred men over women. He only remembered fighting them off with Tonto...Drinking after that...it's a blank.

"You said: reject me, Hate me, Mock me every day, any-day...But you best remember this face I'm showing you bastards... I'll show you real strength."

"You're right...You don't have to swim. And this probably should be instinctual...But just like fighting, you didn't practice for hours because it was stupid or pointless. You have something to prove to yourself you’d even drown for it. Lucien walked toward the end of the pool, sticking one foot in not even believing he would say any of that. But, Tonto never gave him yet any reason to doubt his words completely.

"This isn't part of the deal Y'know...You ain't gotta help me swim.

The sound of water splattered and pattered of Tonto emerging from the pool.

"Well arnt you a sup- HOLY SHIT!!" The otter spazzed out, his head turned faced Tonto. He was... Drying off...NAKED! Drenched green shorts on the chair, Lucien had a front row seat of his rear and plum fur attempting to dry off His body. Water trickled from his frame, he stared for a good while amazed to think he ever see him like this and spiraling mind lead to more 'Vivid' thoughts making his snout bleed.

"What's wrong with you?"

He pointed his head in another direction. Placing a paw over his face Blushing, feeling so exposed hoping he didn’t notice him looking freaking out.

The squirrel sat next to his wet shorts flipping his large soaked tail forward drying off quietly, not sure of what to make of the otters behavior. He never read into Lucien’s behavior a whole lot since he’d always act this way more than once.”Is he always this cautious when no one else is around?” Tonto could only wonder.

"If you say so...By the way, I bought some drinks. It’s not alcohol, but it’s better for ya" His paws grabbed two drinks tossing one to Lucien who clumsy paws let slip into the pool. Tonto was expecting a complaint or a cringe seconds after, but the silent otter opened his drink without a word spoke.” Something’s obviously on your mind. So are you going to tell me, or do I guess?” With everything he's done so far it's weird to think anyone would go out their way to help. His pondering mind had to ask.

"Why'd you help me that day anyway? Or even, why partner up with me after that?’

It was Tonto's turn to shrug from hearing this question. "If I'm honest, I dunno. I
Think you're way too loud, braggy and need to control your anger more..."

"But in city of sketchy animals...You're the most honest I've seen in a while...I trust you."

About as bashful as ever, those words made his little ears flicker a bit. “He...trust me...”Neither one of were keen on talking how they feel about one another. To say that from his own words… Felt powerful. He could be straight as a ruler, or a chance he may actually be… Pan decided he didn't need to tell his true feelings at Tonto, not just yet. This squirrel still felt like a mystery for a awhile...so maybe, he could be fine with this relationship like this until he knew his partner better than just training and fighting.

"Aye I almost died ya know. Let's take a break!"

"But you didn't." Tonto flatly spoke.

Tonto stood up ringing out his wet shorts. And there he was again, head to toe his whole body shown bare. Taking his beverage gulping what's left before crushing the can letting out a huge belch.

A Hasty pounding in his chest, a quiver in his lip. Lucien headed toward the door flustered with his back turned at Tonto. "Dammit p-put some clothes on already! We’re wasting time! P...please? “He sternly spoke before walking out completely, leaving Tonto confused as ever with his shift in moods.

Lucien waited in a locker room as he changed in his clothes, taking a breather going over things he dreamt of. With a smile on his muzzle, Fingers pressed against his lips. “That...felt so real...” The resolve was clear in his head.

Really been meaning to get this out a long time ago...So hope you enjoy or at least the art.