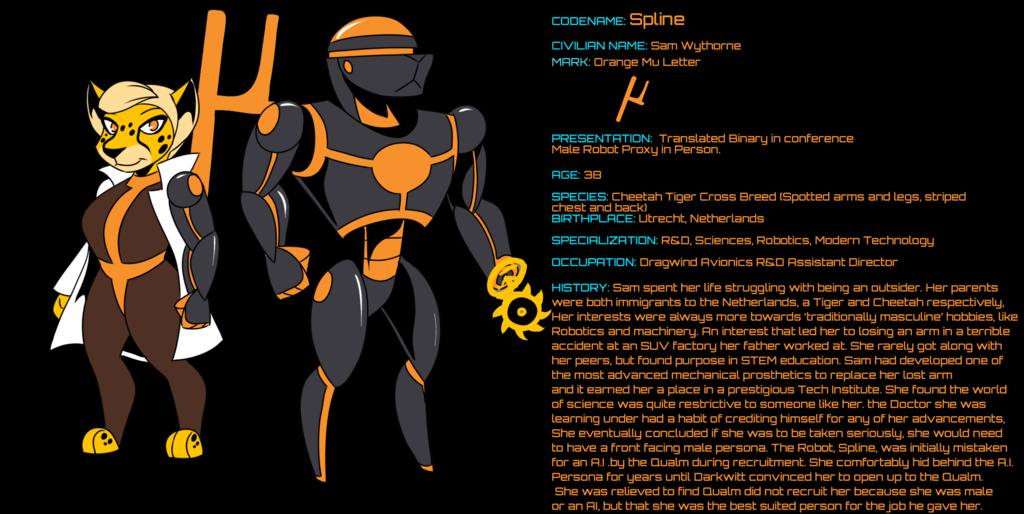 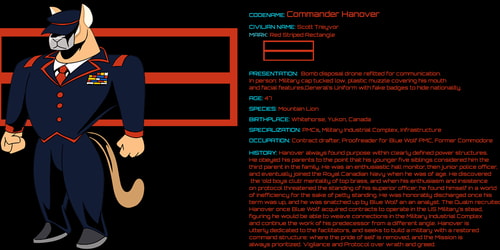 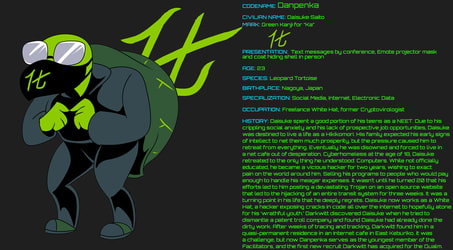 The Facilitators: Spline (art by Madfox)

CODENAME: Spline
CIVILIAN NAME: Sam Wythorne
MARK: Orange Mu Letter
PRESENTATION:  Translated Binary in conference Male Robot Proxy in Person.
AGE: 38
SPECIES: Cheetah Tiger Crossbreed (Spotted arms and legs, striped chest and back)
BIRTHPLACE: Utrecht, Netherlands
SPECIALIZATION: R&D, Sciences, Robotics, Modern Technology
OCCUPATION: Dragwind Avionics R&D Assistant Director
HISTORY: Sam spent her life struggling with being an outsider. Her parents were both immigrants to the Netherlands, a Tiger and Cheetah respectively. Her interests were always more towards ‘traditionally masculine’ hobbies, like Robotics and machinery. An interest that led her to losing an arm in a terrible  accident at an SUV factory her father worked at. She rarely got along with  her peers, but found purpose in STEM education. Sam had developed one of  the most advanced mechanical prosthetics to replace her lost arm and it earned her a place in a prestigious Tech Institute. She found the world of science was quite restrictive to someone like her. the Doctor she was learning under had a habit of crediting himself for any of her advancements, She eventually concluded if she was to be taken seriously, she would need to have a front facing male persona. The Robot, Spline, was initially mistaken for an A.I .by the Qualm during recruitment. She comfortably hid behind the A.I. Persona for years until Darkwitt convinced her to open up to the Qualm. She was relieved to find Qualm did not recruit her because she was male or an AI, but that she was the best suited person for the job he gave her.
______________________________________________________________________

Spline was originally the youngest of the Facilitators I met. I was quick to communicate with her because she seemed to take a liking to me early on. After much time discussing, I figured out her 'A.I.' was just Sam remotely controlling a unit. I've had experience with A.I. before and there were some inconsistencies. It took some time to get her to open up to me, but I didn't think she would benefit from keeping her gender a secret if it meant her being fake to herself. She eventually opened up to the Qualm, but none of the others. I am unsure if she would prefer to enjoy the persona (something I empathize with) or if she secretly wants to identify as male.

I wonder if she's ever considered making the transition.