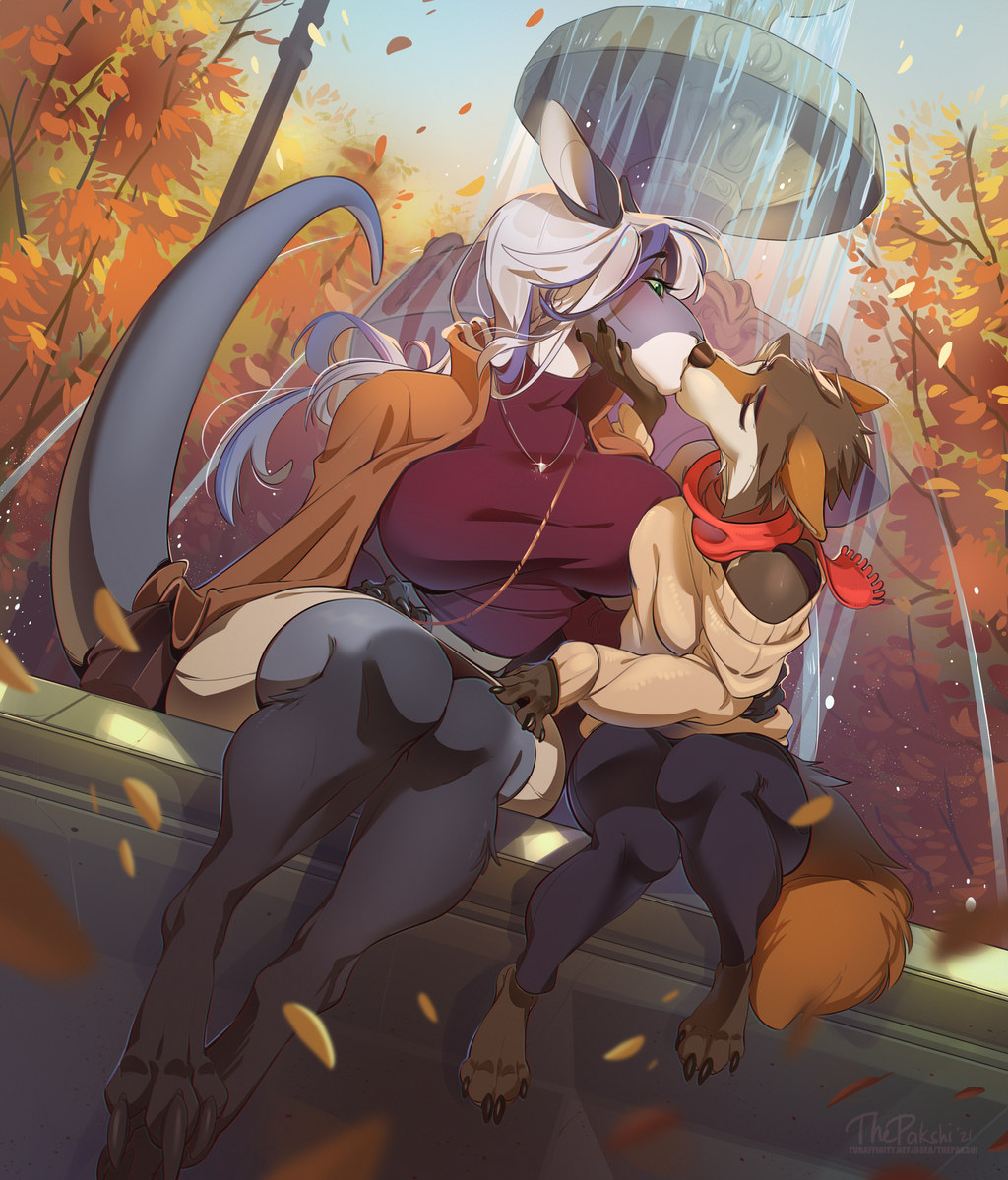 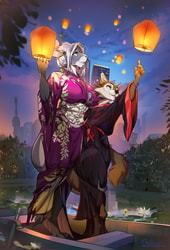 It'll Be All Right - By ThePakshi

It seems like a lot of things were leading up to this image! I received a very tender moment shared between Kyra and Murana and I was tasked to bring it to life through writing! I was honored to help flesh out Kyra as a character and am enjoying to continue to do so! She has such a dichotomy of personality - when she's alone or with people/sex partners she trusts, she can be bold and aggressive - Greyshores might even say zealous! However, when it comes to people she likes and has fallen for but is afraid of losing them since they may not know what she's like, she is shy, demure and very flustered. It's an interesting mix and one I am having fun with working through as Murana gets Kyra to come out of her shell and be more open and upfront about her feelings which can only bode well for future relationships with Kyra. With that, here is the long awaited kiss!

Murana wasn't planning on doing anything that day, having it be a lazy Sunday. However, the phone call from Kyra got her on edge. The kangaroo sounded anxious or distressed. Murana was worreid that something bad happened and possibly someone close to Kyra died or she got mugged or worse. The only thing she got out of the phone call was that she was to come quick to the park - the very same one they went to almost two months ago for the festival. She was curious why there of all places.

Still, Murana didn't question and soon enough saw the kangaroo fidgeting while sitting on the fountain ledge. She was dressed casually like Murana was, with a light jacket on to ward off the oncoming chill of the looming winter. It had been a blustery fall season. She started walking towards the nervous roo and had to call out and stop her when Kyra finally noticed her presence. Kyra had stood up and looked like she was ready to leave, as if suddenly deciding whatever she was going to tell Murana was a horrible idea.

Gently putting a paw on each wrist and guiding her back to sitting on the fountain ledge, Murana sat down next to her. Concern was etched into her face. "Kyra? You're starting to scare me. What's going on? Did something bad happen?"

Kyra shook her head vehemently. "No...no, nothing wrong. I just... I just don't know how to approach a situation and I was worried I'd just mess it up."

"Is that why you called me out here? To ask for my advice about something? You could have just told me over the phone." Murana reasoned.

Kyra shook her head again. "No, this was something that I felt needed to be done in person." Kyra closed her eyes and breathed deeply to soothe her nerves. Opening them again, she looked down at the small wolf. "I like you, Murana."

"No, I mean... I REALLY like you. Like more than friends." Murana's posture changed. Kyra wasn't sure if she was leaning away or not as if in disgust. The expression on the wolf's face was unreadable. Without waiting for a rejection, Kyra blurted out. "I'm sorry! I know that's probably not what you wanted to hear. I recall us meeting so many months ago in the gym. We found each other because we needed a girlfriend to keep the guys at bay from ogling us and to keep each other accountable in our workouts. It was a security blanket for both of us and it started a great friendship I cherish. But over the time we've spent together going out and having fun, my love for you kept growing to the point I can't contain it anymore!"

"No, please...let me get this out." Kyra was shaking. It was finally happening, the beginning of the end. She needed to get it all out. "I didn't want you to think of me as just another guy, because I'm not. Yes, I realize I have unique anatomy and sometimes my chemistry screws with my mind and I want to lay you out something fierce, but then you might just view me as someone else who was in it just to get into your pants and I didn't want you to view me that way. You keep saying you're okay with it, but my mind keeps playing tricks on me and making me believe you aren't. I've adored every moment we've been together and I'd hate to lose you as a friend over this, but I couldn't contain my feelings and wants anymore, Murana. It's hard for me to do so! I can't explain it, but it's an inner drive I've always had that even Seth has said gets me in trouble at times."

Kyra breathed in deep again before spouting more. "And I know you are seeing that other wolf, Anthony, like you've told me about. It's probably super serious with him and I don't want to ruin what you got going with him, so if you don't feel the same way as I do then I'll just shut up and deal with it. I completely understand. It's very selfish and rude of me to even bring all of this up and now it's going to make this friendship all weird and I don't even know why I'm still talking. I should just leave. This was an awful idea. Dear gods, I can't even... this is..." Kyra began to stutter and looked to be rising up to simply just leave.

"Kyra, would you just shut up for one second?!" Murana barked, causing Kyra to stall, surprised at the outburst.

Before she could react, Murana gripped Kyra's chin in her paw, holding firm her thigh with the other and brought the roo's face down to hers in a passionate kiss. Kyra's tail stood straight up at the sudden nature of the interaction, feeling her cheeks flush as Murana's mouth pressed up against hers. Within moments, Kyra melted into the kiss and began to push back. She could feel Murana's tongue lightly grace her lips as they shared this moment.

Pulling back, but keeping Kyra's face close, Murana smiled at her. "Kyra, I've known for quite a long time you were into me. It wasn't hard to see after you doused yourself in the scent of my panties at the gym."

"Oh..." Kyra tried to look away ashamed. "I'm very sorry about that." She thought about it a moment. "If you knew, then why not say anything to me sooner?"

"I guess you could say I was in the same boat. I didn't want to ruin a good thing and so I just left my feelings on it alone and just enjoyed our friendship. Look, I care about you as a friend. You've been one of my best ones. Unlike Anthony, the expectation was never there whenever we went out together to have sex later that evening." Murana chuckled. "Don't get me wrong. I love Anthony a lot too, but he's your typical guy as well. A sweetheart nonetheless."

"But wouldn't being involved with me be bad for your relationship with him?" Kyra was worried about the potential drama to erupt there.

Murana simply licked Kyra's nose, causing the roo to scrunch it involuntarily. "No. We actually are kinda open right now since we both agreed we're not ready for a committed relationship yet. Granted, he's probably the first wolf I've ever felt so strongly for, but we aren't one hundred percent on board with marriage yet, but we do like each other's company a lot. Besides, as I see it, you're still a girlfriend who needs someone to be there for her in ways that are more than standard. I don't mind being there for you in that way, Kyra."

Kyra's breathing picked up. "You... you mean it? I mean, you're okay with everything? We are talking about the same thing, right? Like... in bed stuff?" Murana nodded with a grin.

Kyra's heart seemed to match the pace of her breathing now. All sorts of lewd thoughts began to flood her mind, but they were silenced when Murana went in for another kiss. This time their tongues did touch. It was like lightning struck every chord and nerve in Kyra's body. Instinctively, she shot her tongue out and tried to wrap it around Murana's. Her hands began to grip and hold Murana's shoulders and arms tight as she brought Murana onto her breast, nearly lifting the small wolf off the ledge they were sitting on.

Murana pulled back a bit forcefully. "Unless you want everyone to see what happens next right here on the fountain, I think we should head back to my place. Both my boys are out doing field practice. I'm technically 'home alone.'" She smirked.

Murana disentangled herself from Kyra's now strong grip and stood up beside her. "How about we help each other out and relieve the stress of this week together, yes?" Kyra's eyes were glazed, but she was hanging onto Murana's every word. "Come on, girl, I actually need to have a functioning friend walk me back to my place."

Kyra snapped out of her haze. "Yes, of course! Let's go!" She jumped up with a start. There were several onlookers who had witnessed their passionate interaction. A few were giving some leers, but neither of them cared one bit. Walking paw in paw out of the park, Kyra glanced down at Murana. "Are you absolutely sure you're okay with all this? I mean... this isn't just some dream?"

Kyra had giddy flutters in her heart. This was like a crazy dream come true. Murana was still her friend and she was going to do all sorts of passionate and loving things to her! She was beyond excited. Maybe this could be something more? She still worried about Anthony in all this, but right now it didn't matter. All that mattered was that she please this gorgeous wolf who called her friend and accepted all that she was.