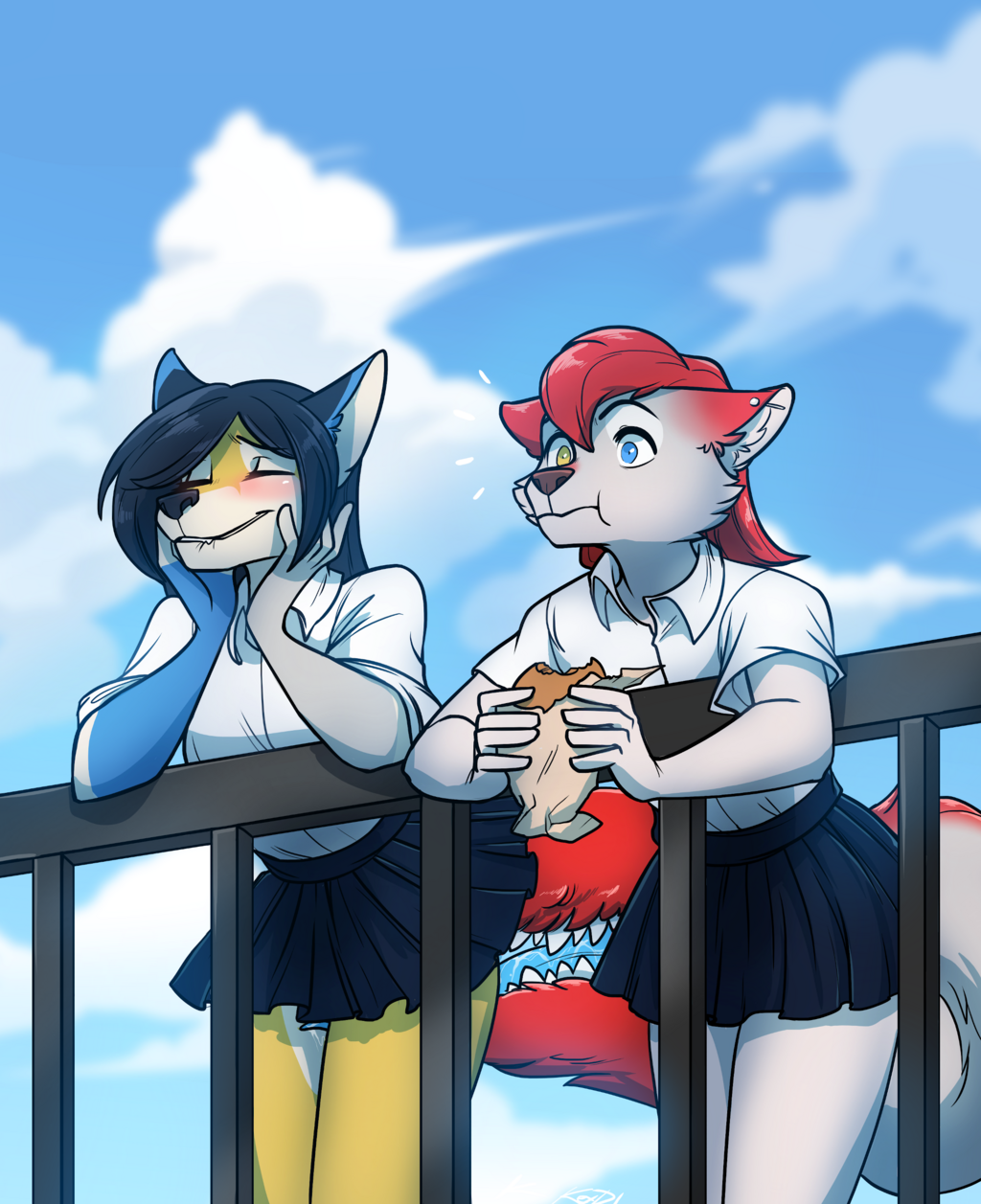 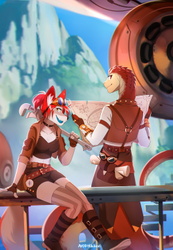 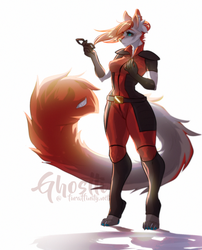 A lovely collab piece with one of my friends, Stripe Rose, with her fox sona. She was always interested in a piece with my character, Taylor, but we couldn't exactly decide on a suitable idea. Then Stripe stumbled across a Shoujo anime style YCH that she felt would be amazing for our two characters. Throw in the wild card of Taylor's tailmaw, Ahya, and we had ourselves a funny and hilarious piece that ended up being both cute, amazing and humorous. Although not exactly canon to Taylor's book series, it is a fun 'what if?' scenario if Taylor had been able to go through high school and college as a young teenage wolf.

Taylor loved talking with her best friend, Rosie, on the days she was free during lunch to chat. They had such different schedules in high school, their paths typically never crossed until Fridays. Taylor cherished these times to connect with her friend, especially considering she didn't have many friends to begin with. Many tended to steer clear of the only girl in school with a tailmaw. So it was a miracle and blessing Rosie didn't care about any of that and just wanted to hang out with the 'weird' girl.

For a fox, Rosie was remarkably mature and way more experienced in things such as romance than Taylor was, since Taylor was not currently interested in things like sex with the hot boys or girls of their school. Rosie made it no secret that she had dated and bedded a few of those delicious pieces of sexy vixens. Her current girlfriend was the captain of the football team. Rosie was very popular. Most would have been ridiculed for associating with Taylor because of Ahya, but not Rosie. Her reputation alone was enough to garner respect for Taylor's friendship to Rosie that most tended to leave Taylor alone. Which suited her just fine. She was content with just Rosie as a good friend.

Today was a bit different, Taylor could tell as she purchased a sandwich from the cafeteria and walked out with her to the oceanfront terrance nearby their school. As usual, Taylor allowed her friend to talk and get all her escapades out in the open. Taylor was good for a sounding board and enjoyed Rosie's stories very much. In a way, she could vicariously live through Rosie.

Focused more on her sandwich than the story at hand since she was famished, Taylor only got a brief notion that her and her girlfriend finally had sex the previous weekend. Rosie was one who loved going into exquisite detail about her experiences and this was no different. Taylor, concentrating on her amazingly good sandwich today, wasn't relly paying attention to Ahya in that moment. It wasn't until Rosie mentioned that she could still feel her girlfriend's tongue on her...as if it were still happening...that Taylor knew something was wrong.