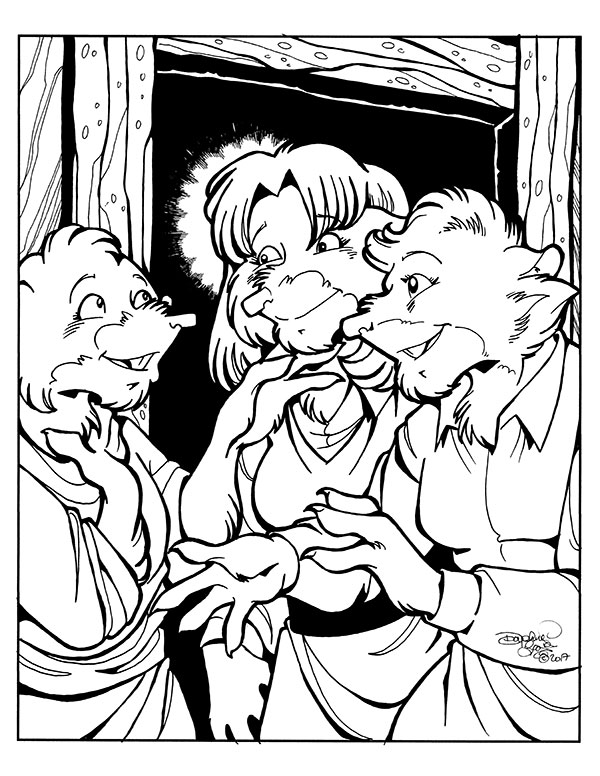 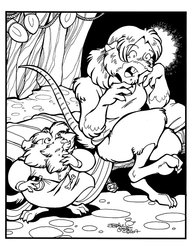 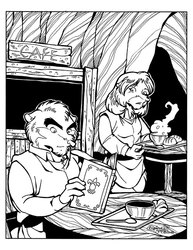 I slept unusually well that night. The large bed was luxurious in its comfort, the thick mattress almost engulfing my form. Sunlight from the window woke me from my slumber with its welcoming warmth. Realizing I couldn't stay in bed all day much to my disappointment, I sat up rubbing my weary eyes. I looked around the sparsely decorated room, a chair catching my attention.

Over the back was a pile of neatly draped clothing, my tank top nowhere to be seen. Walking over to the chair I studied the tunic and shirt. The fabric was coarse woven cotton dyed a deep purple. The separate shirt was soft and folded lightly in my hands. The ensemble was finished off by a black leather belt, which made me curious as to what they used for raw material.

At first I thought they belonged to Justin, but the size was too small. Not wanting to take the clothing without making sure they were for me, I opened the door, peeking out into the main living area.

The sofa was empty except for blankets neatly folded and tucked to one side. I walked out, not concerned about my nakedness. I was covered in fur. How could I be naked? I guess the rats use clothing more to accommodate their human sensibilities rather than actually needing them.

On a side table next to the sofa was a tent-folded piece of paper with my name scribbled on it. I picked it up and started to read.

I apologize for not being available when you finally wake as my leadership duties are always calling me. The clothing left by the bed is yours. I hope you like them. Please feel free to use any of our facilities at your disposal. I look forward to meeting up with you later in the day.

How sweet of him, I thought. I get a new body and new clothes. I placed the paper back on the table, returning to the room.

The new look was strange as if being turned into a rat wasn't strange enough. In my new tunic I looked like I had walked out of a cartoon. It would have been funny if it wasn't really happening. My rumbling stomach reminded me that all I was running on was a bowl of soup and a roll. I had yet to have breakfast.

Hmmm, I wonder if that cafeteria is still open? Looking forward to a hearty meal, I walked over to the main door of the room. As I was about to grab the handle, a slight panic stopped me.

"Wait a minute," I spoke out loud to myself. "This is not normal. I don't know anybody here except Justin and he's nowhere around. What if these rats are hostile?"

I shook my head in disbelief. Why would the rats' change now that I wasn't human anymore? The friendly wave given to me last night was proof that their intentions are good. I took a deep breath. It was time to socialize with the masses. I couldn't let a panic attack convince me of otherwise nor could I afford to become a hermit. I needed these rats more than ever, if not for help, then just for the company.

The corridor was empty however the bustle of activity echoed from both ends.

Smoothing out my tunic and running my hands through my hair out of nervousness I took the first brave steps. I remembered the direction we took from the cafeteria and reversed them, retracing the steps. I did not want the embarrassment of getting lost my first day here. As the corridor opened into a large hub, I came across my first rats.

The cafeteria was a popular place this time of morning. Many were still nursing breakfast drinks and snacks as they went to wherever they were going. I thought I fit in rather well. The minute I appeared though, everyone stopped with all attention on me. From what I could tell, I was the only one with a mop of red hair on their head, the only physical characteristic that pointed I was once human. I felt self-conscious but not threatened which was a good sign.

"Good morning," I said hoping to break the tension.

"Good morning," many of them answered back with wide smiles.

I could smell the hot, fragrant food in the air, telling me that I was near my destination. My stomach rumbled, my pace speeding as a result. The dining hall came into view although it was not the empty, quiet place it was several hours ago. The place was jam-packed with rats talking, laughing, eating and all just having a good time before work. I fought the urge to run back to Justin's room.

I perked up at the sound of my name. A female rat came running over, a slight yet noticeable limp jarring the memory from my head.

"Oh! I can't believe it's true!" she squealed, putting her arms around me. "When Justin told everyone that the Stone had turned you into one of us, even I didn't believe it. I told you it had power."

"You can't believe it," I answered, reining the sarcasm as best I could. "I'm still waiting to wake up."

Nancy laughed. "So what are you doing here?"

I scratched the back of my head. "I was hoping to get something to eat but I'm feeling a bit overwhelmed."

Nancy took my arm. "Luckily I just got here myself so we can get some food together. I'll give you the tour while we're at it."

It didn't take me long to get into the routine of being surrounded by rats, never mind being one of them. It was strange finding myself settling in as well as I was. It concerned though. I had a nagging notion not get too comfortable. I made a conscious effort to make sure that feeling did not disappear.

Nancy played goalie as the rumor of a human turned rat spread throughout the colony. Many curious souls came to find out for themselves if it were true. Despite the Stone's known magic it never manifested since some incident with a mouse named Mrs. Brisby. Not even Justin, their own leader, could make the Stone work. Now I was miracle number two. Needless to say, interest was high.

As breakfast waned, so did the fascination with me, not that I minded. The feeling that I was some kind of circus freak was wearing thin.

We watched the cafeteria empty out with rats dressed in simple white smocks starting their cleaning routine. Despite their care in cleaning up after themselves there was still a need for a cleaning crew to handle what was missed or left behind.

As we got up to leave, a dark figure made his way across the cafeteria, a pile of papers in his hands. He was a bit away from us, still I noticed his sleek elegance. His shining fur was black with light gray points highlighting his hands, feet, and muzzle. A maroon tunic with a cream color shirt, blazed against his dark fur.

"Ahem," Nancy coughed, not needing to clear her throat.

"What?" I said, not noticing I had been staring.

"Well, I guess you're not having problems with your new self if you're already scoping out the males."

"WHAT!" I groaned. "I wasn't scoping!" I hoped she could not see me blushing through my fur.

We made our way to the exit, opposite the direction the black rat had gone. Nancy leaned in closer. "By the way, you do best to avoid him anyway," she said with all seriousness.

My ears perked at the suggestion. "Why?" I asked. Not that I was planning on meeting him but Nancy's sudden change in tone piqued my curiosity.

"That's Jinnai, one of the guards. A lot of us just avoid him."

"No offense, but that doesn't tell me anything," I answered. "All he did was walk across the cafeteria with papers in his hands. I would hardly call that dangerous unless you're worried about paper cuts."

Nancy sighed, trying to find the words to explain this. "Well, he's not dangerous as far as I know personally. His father killed our original leader, almost murdered Justin if it wasn't for Mrs. Brisby and he would have killed her too if given the chance. You must know the saying about the apple not falling far from the tree."

"This guy's father must have been a psycho. What happened to him?"

"He was killed at the hands of a henchman. Justin only made Jinnai a guard because his mother pleaded with him to do so. As far as I know not even Justin trusts him much."

"Because of his father?"

I felt sorry for the rat already. No son should bear the weight of his father's sins, but I didn't know that for sure either. Maybe he was just as psychotic. Or maybe everyone was just taking their hatred of his father out on him. Either way, with the speed everyone learned about me added with the rumors about avoiding certain people, I found the rats as gossipy as a knitting circle.

From the library to food storage, to a concert hall, I was given the grand tour of the entire compound. It was amazing what these rats accomplished in the middle of the wilderness. Nancy proudly gave me a history lesson of every room and hall, explaining the hardships they met the first several months of their stay.

At first I hardly recognized Justin as we turned a corner. His face was serious, his body posture rigid. His whole demeanor exuded authority, totally opposite to the relaxed, mischievous rat I remembered. When he turned and saw us coming down the hall, his face changed to the kind savior I remembered.

"Anna! Nancy!" he called. "I was afraid I wouldn't see you until later tonight. So how do you like our home?"

I smiled with excitement. "It's magnificent. I would have never had guessed that all this was here."

"Yes, we are very proud of this place," Justin answered. "To think it almost didn't happen but here we are." The papers in his hands ruffled as he waved them.

Turning back into 'fearless leader', Justin faced a group of rats exiting the meeting room behind him. He spoke to them briefly, returning the pages back to them. The last rat to get his pages was the black one in the red tunic.

"I was just looking over reports from my guards," Justin explained as he turned back without looking at him. I on the other hand was trying to get a discrete, better look. Jinnai walked off giving a slight backward glance that I happened to catch.

Finished with his debriefing, Justin clapped his hands, returning his full attention to us. "Now that's out of the way, I want to show you something that I'm sure you'll appreciate."

"I can't imagine what more you can surprise me with," I answered. Justin gave me a wide, teasing smile.

Following through a maze of corridors, we reached a large storage area. All sorts of grains, nuts, berries, and other foodstuff were neatly piled in open burlap sacks for easy access. Another section housed raw materials like wood and fabric. We passed over to a third section where miscellaneous items like wire and scrap metals were stored. One huge item immediately caught my attention, bringing tears to my eyes.

It was my camera.