Teemo did his usual checks at the base before he left, making sure he was ready to go before the barrier was let down and he was able to enter the battle. He was wondering if his summoner was going to have him buy boots or a Doran's item, when he realized that they didn't have a support champion. He looked around, noting that they had a very obvious line up. Yasuo was obviously going to the middle lane, Garen was obviously going up to the North Side (which Teemo had actually become very content to occupy lately), and Udyr was obviously going to prowl the jungle. That left just him and... Twitch.

Teemo could hear the echos of the summoners, as the whole team's champions gave a collective sigh.

"Um, where am I going?"
"Dude, pick order. You're going support with Twitch."
"But Teemo is so OP on top! They're playing Darius, and I'd clean up!"
"Dude, Twitch Teemo is super dope."

They continued to chatter in their strange English-like language... sounded like some kind of slang. Teemo sighed as the barrier fell. "I'm just going to get my boots and potions and head to the South Side..."

"Don't worry, I have just the thing. We can both get our items with my new way of doing things around here," Twitch said, following his yordle companion past the towers.

"But I didn't buy a gold item," Teemo said, confused. "And if I take the gold from the minions, you won't be able to get all your items that you-"

"Oh, don't worry," Twitch said, a malicious glint in his eye, "There are many ways to get gold on the rift."

Teemo was too busy to worry about it; he was slowly going into his borderline antisocial combat mode. Cold and calculating, he noted the advantages they were getting by Udyr going to golems first instead of Gromp. He went into the high grass close to the enemy tower and started to camouflage himself, while Twitch hung out underneath the allied tower.

[i]If Udyr starts with golems, that means that Garen will miss a few minions, but they're less important to him. He can do pretty well off killing the Darius, he shouldn't have many issues... as long as his summoner isn't dumb... Since we'll probably need minions, it's good that we aren't helping Udyr, so we can kill more of them to get more gold advantage. We're going to be fine... I think...[/i]

Teemo got a little bored while he waited for the waves of puppet enemies and allies alike to shuffle into position, he peeked out of the bushes. He was so well hidden, he didn't have to worry about getting spotted... but he started to notice a few things. For one, Twitch's poison vials were filled with a dark yellow liquid, rather than the usual green. He didn't make a point of hanging around Twitch, but he'd seen him in other scuffles on the Rift, and he was pretty sure that his poison was green. And what's more, he also was wearing a small satchel on his right side; it appeared to be pretty full, and it looked hastily stitched to his usual shoulder strap. What was he planning on doing this time? Was he going to throw the game? Was his summoner toying with his team? He hoped not. Games like this usually ended in his summoners screaming at each other and him dying a whole bunch. That's not so fun.

Finally, everyone was in position. On his left, he saw Alistar and Graves, to his right, Twitch, loading more of his yellow poison into the hopper on his crossbow. He started picking off minions, and Teemo readied a blinding dart for if Graves decided to get a bit trigger happy on his ally. Speaking of...

It seemed that Alistar was getting a little too confident; he had to have bought a Relic Shield; he kept taking minions... so he had some gold coming in... and some of those minions would be easy pickings...

Teemo shook his head. Those are for Twitch, not him. His job is to protect the plague rat and maybe help him kill enemy champions.

Alistar was skirting around the edge of the minions, when Twitch got him with one of his arrows. Quickly realizing that he was caught out of position, Alistar went to retreat, after Twitch did something strange... he pushed the minion wave forward. This was odd because doing so made them really vulnerable to an ambush from the jungle or the river... what was he up to?

Moreover, what was Alistar doing? He was just standing there. Was that Twitch's new poison? A stun?

He pulled out his telescope, and took a closer look. It seemed that Alistar had...wet himself? That's not a usual occurrence. Apparently Alistar was surprised to a greater degree, judging by his expression. "You're looking a little green..." Twitch taunted with a small cackle.

"You!" Alistar reared up with his fist to attack the small mutation, "Wh-what did you do!?"

"I wouldn't do that if I were you," Twitch said, reaching into his bag, "Because I'm the only one with something that can help you now."

"And what's that," he rolled his eyes, as both he and Teemo were rather doubtful that it was an antidote...

"These," Twitch said, pulling out a thick adult diaper, that was quite large, probably big enough to fit the minotaur. Alistar reached for it, looking away and his face reddening. Twitch pulled it out of the way.

"These things aren't free," he said.

"On top of everything else-"

"Listen," Twitch interrupted, shooting a blot at the last red minion that was on the way, nailing it right in the head, and grabbing one of his venom casks on his back, hefting it in his free hand. "if you want something on the rift..." he paused briefly to toss the cask at Graves. Teemo heard it shatter, and Graves cursed. "...you have to pay up."

Alistar grunted in disapproval, "How much..."

"That's not even close worth it."

Alistar visibly blushed, as he took out a bag of coins and tossed it to the rat, not looking him in the eyes. Twitch handed over the his "item," as he caught the bag of gold.

Alistar went to hide in the bush, just inches from where Teemo was hiding, and began to teleport back to base. He knew Alistar wasn't wounded nearly bad enough for him to take out. Twitch nearly disappeared as Graves came back, craving some of his blood. It was a thirst that would have to wait; he launched some of his special ammunition - smoke canisters and a large buck shot - trying to hit the near-invisible Twitch, but to no avail.

He came into the bushes next to the yordle, tossing him the bag of gold. "And that's how you do it, my friend. Now let's teach this con man why he can't compare with the real champions!"

"Yes sir!" Teemo saluted quietly, not that Graves would be able to hear over the gunfire. He had a feeling that he hadn't seen the last of Alistar, but Graves clearing out minions like a madman meant that this ambush was going to go very well.

One thing's for sure, the both of them are definitely on tilt. 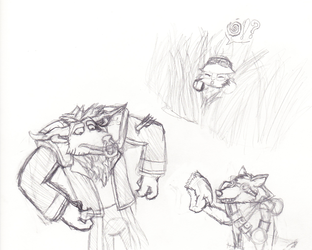 This is just the short story behind a recent pic that I did:

It is a bit longer than I would have liked to put in the description of the pic, so, you know. Might as well submit as a story.