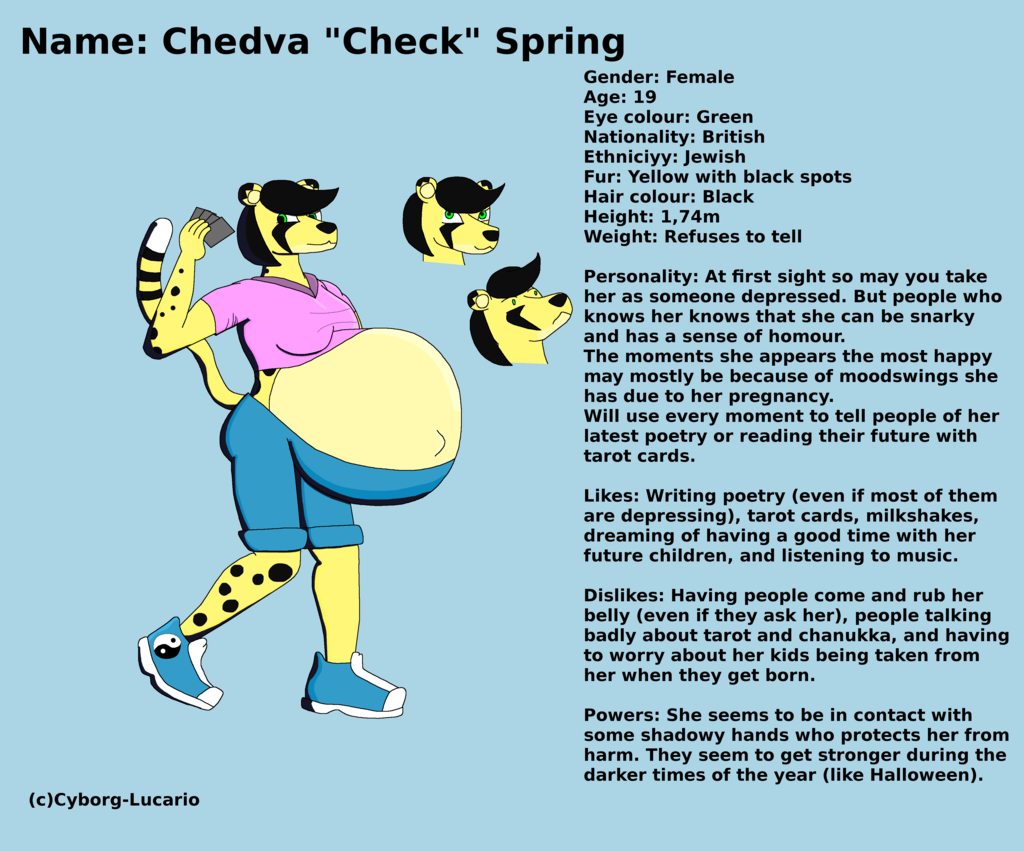 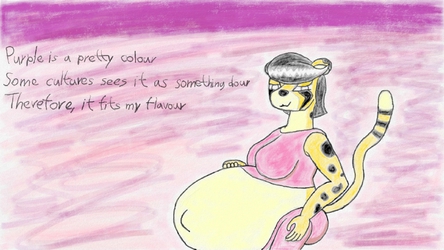 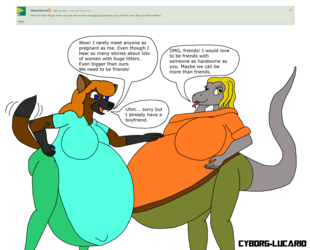 A reference sheet for my cheetah girl Check.

But since I didn't have room to fill in all of it on the sheet so do I have to tell more about her in the description (something I wonder if people actually read).

Bio: Young Chedva was once a an ordinary little cheetah. At least how ordinary a child could be with grandparents who won £3000000 at the lottery, and still being depressed even when her family could afford to buy her everything.

She didn't think that Chedva sounded good with the personality she had so she decided to let everyone call her Check just so people may think she's something special at least.

But her depression made her an outsider at school, so she had to take medecine.

One day though when she was alone she nearly took an overdose, but something grabbed her and took out the excessive pills from her.

What she saw was at least three clawed hands that came from her shadow. She didn't know why, but she knew that those hands must have been made from some kind of inner feeling.

And with the knowledge of her shadow hands so did she get interested in the supernatural, but the thing she found most interesting was tarot cards and reading them.

Shortly thereafter she tried it out on one of her classmates, and to her surprise so did she notice that her hands has a certain ability. If they touch somebody and Check told them their 'future' as foretold by their cards, they will believe that it will happen.

But even though her readings have good things happening to her classmates so was she wary of fulfilling everyones fortunes as she worried herself of consequenses.

So if anyone asked if her readings are true, she would mostly say that you cannot trust the cards 100% and in those cases where your life does really well by following the cards 100% are just coincidental.

When she became 18 so did she move from her family to live for herself. Someone told her to move to Sweden, something she was afraid of doing at first. But she was glad that she did as she realized that England most certainly is a poorer country than Sweden.

She had a hard time getting a job though and she knew that the money she got from her family wouldn't last for very long.

Would she get depressed enough to seek suicide? No, her hands would just stop her from doing so.

While reading online about anything she could do, she stumbled upon an announcement that a lab is experimenting on a way to make someone pregnant without sexual intercourse. And anyone who accepts to be part of the experiment will be richly rewarded.

While she thought that getting babies without the male and female doing the thing together sounded boring (and might possibly lead to governments being too strict with population control), so did it sound to her that she might get enough to make a living for herself and her children. And she might also find some meaning in being responsible for some children of her own (even if that sounds way too old fashioned).

So she did the experiment and got her reward, which was not not only a lot of cash, but a small mansion too. Which in retrospect for her might have seemed unneccesary to give her as she's technically still living alone.

Though in later months so has she stumbled upon a french/german skunk who even though he may be a cassanova wannabe may be the guy she needed.

"I really hope he has no trouble with me citing my favourite dark poetry."

-Her shadowy hands may be a stand. But due to legal reasons, they're not a stand.

-Ok, her stands were originally a joke I made in a Halloween picture I did a few years ago because I dressed her up as Oichi from Sengoku Basara.

-The reason why I haven't put the hands in the picture is because I don't have a definitive design for them.
-How many months is she? I will take a wild guess and say six months. No, I have no idea how many she carries.