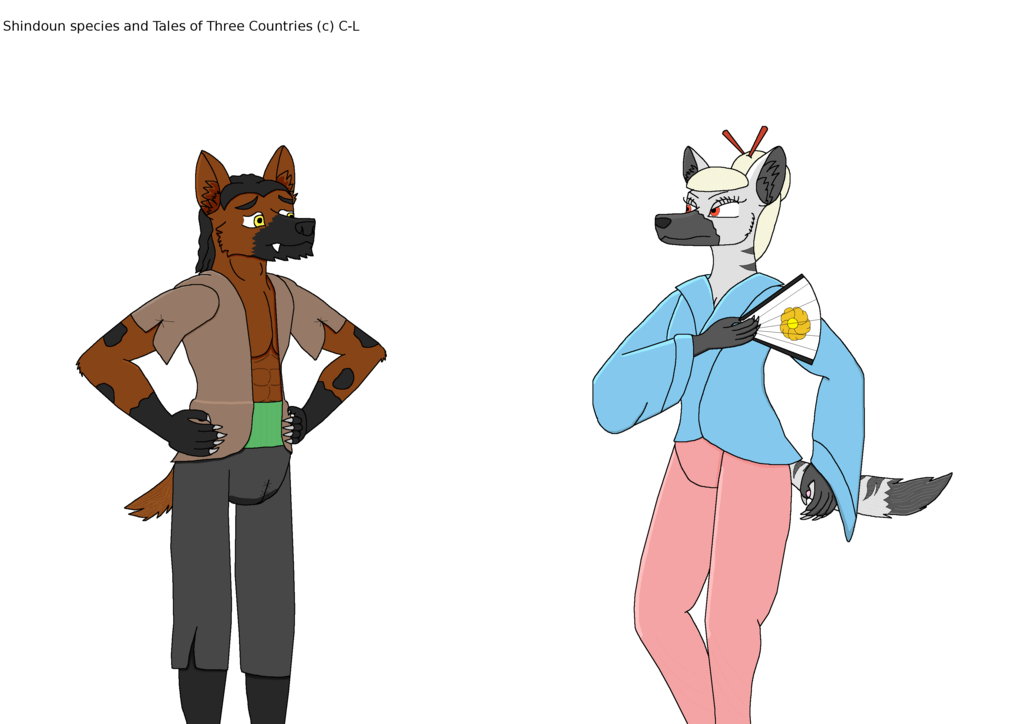 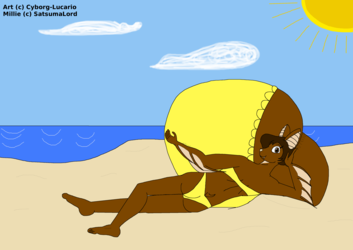 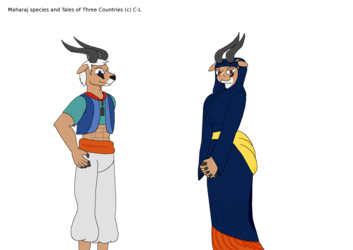 The hyena-like Shindoun. A race of proud warriors living in the country of Mahin.

Their earlier culture was what most other races would call barbaric, what with fighting in bloody battles and their shamanism.

Though later, their culture developed thanks to accepting the Lizmen race to get a region in Mahin to call home (more on the Lizmen much later). They became more accepting of different cultures and the richer, and the powerful shindoun began to prefer silk clothes as a way to differentiate themselves from the pheasants.

They also found out how easy it was to write down runes on paper instead of carving it on stone or wood (of course the "intellectual" shindoun wasn't so fond of lesser intellectuals being able to write easily).

Though they still do battle, as daimyos fights against each others to gain power and favour from the empress. They also had a hard time to accept the maharaj specie as allies since they once feasted on maharaj meat a long time ago. But the beautiful young empress of the shindoun, Ryuu Svea, stepped up and discussed with the kalif of the maharaj, Abdul Mustafa. They came up with a deal that would bring peace between their species for years to come.

Some historians theorizes that they were actually in love. Though it's strange that they didn't marry each others then if that was the case.

Maybe because they realized how meaningless it was if the two of them couldn't get any childrens together due to them being of different species.

But disaster struck when at age of 28, the empress fell to an unknown disease. Not even the wisest of the maharaj, nor the most cunning of lizman could find out how she actually died. It just didn't seem natural.

Could it have been the shamans who mostly were against the idea of their culture evolving and abandoning their roots. Or was it a daimyo who really thought she could be a better empress than her and decided to have her assassinated.

No one knows. The only thing for certain is that the empress didn't have any heir, which gave all the daimyo the signal that they all should fight to become the new empress of Mahin. Some of them with good intentions, others who wants to spread war over to the rest of the world.

Shindoun are usually led by a female, while males are mostly below the lowest ranked females (though there are rare exceptions). The common shindoun is the spotted shindoun, while others include the rare brown shindoun known to have long fur, the striped shindoun who is more equal when it comes to gender and knows of ninjutsu, and the shortgrown aardwolf whom no one takes seriously just by looking at them, but they can prove to be clever.

-Originally so did I make almost all of them ninjas no matter what race they were. It was during my Naruto phase. Which I admit I'm ashamed over.