Zakuul Seasons and Chosen of the Old Gods by CursedBeasts 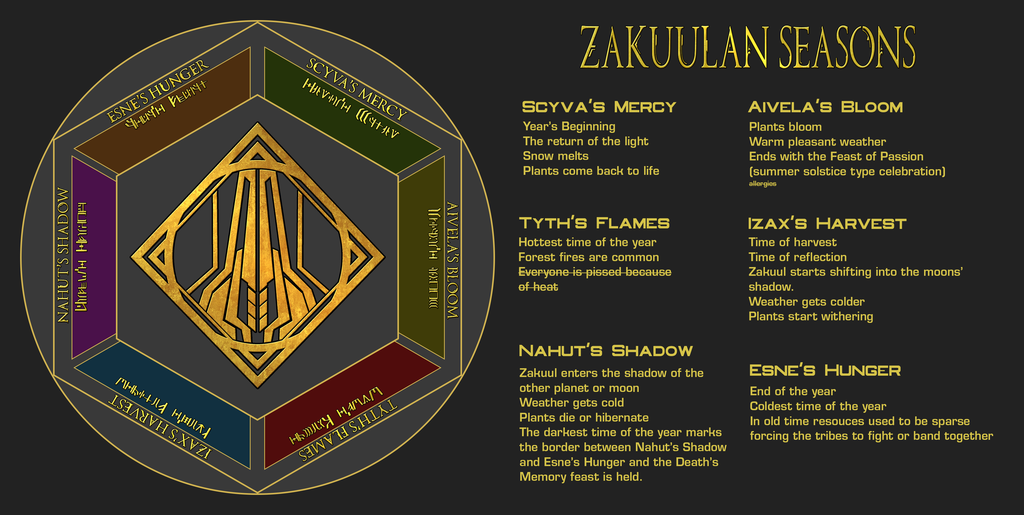 Zakuul Seasons and Chosen of the Old Gods

Zakuulan seasons, zodiac cycle, and Chosen of the Gods

A cleaner version of the Zakuul seasons headcanon thing, with some additional notes to what I have posted here.

Zakuul crest in the center was made \ extracted \ drawn by @impe-comic on Tumblr or ilayas here!

SWTOR fonts were found online, I sadly don’t have the places anymore, but they are called “customtor” for the fancy title font, and “OldRepublic” and “Eurofont” for the text. I also used a Zakuul runes font that I made.

I don’t know how long the solar year is on Zakuul, so I just kinda divided it into six parts of unknown duration that correspond to seasons.

Winter is basically Zakuul going into the shadow of another planet or moon or both, blotting or partially blotting out the sun.

Disclaimer: I made this all up. It’s not confirmed nor denied in swtor lore.

I will also add onto this as I have more thoughts.

Scyva’s Mercy, also known as Scyva’s Tears, marks the beginning of spring and the year cycle as Zakuul leaves the shadow and starts receiving sunlight, leading to warmer weather, thawing of snow if it has been present, and the return of foliage and plants.
It is said that people born in this time are protective and caring of others, be it their children, friends, loved ones, or people under their command.
Force Sensitives born under this sign may become Chosen of Scyva, manifesting healing powers and in some cases, ethereal wings.

Aivela’s Bloom follows Scyva’s tears and is marked by warm pleasant weather and the blooming of plants (and allergies). Think your late spring - early summer. A festival dedicated to the goddess is held during this season, titled the Feast of Passion. It celebrates love and beauty, and weddings are often held during the time.
According to belief, people born under Aivela’s sign are passionate, often outgoing, and driven, but can also be vain. They can be the guiding light to others, or they can be blinding and confusing.
Force Sensitives born under the sign can become Chosen of Aivela, basically granting them a boost in charisma and drive.

The hottest part of the year, and the time when droughts and forest fires can happen. (it’s hot and everyone is sweaty and pissed)
Like those born under Aivela’s sign, people of Tyth can be passionate and determined. However, they are prone to anger issues.
Force Sensitives born under Tyth’s patronage can become Chosen of Tyth, and are born warriors, usually becoming Knights of Zakuul, although Scion Chosen exist as well. On the darker side they are prone to violence and recklessness.

Izax’s Harvest is the beginning of fall and the time when the crops would be gathered in the old times and in the agricultural parts of Zakuul. Zakuul starts entering the shadow of the other planet \ moon and weather gets colder. Think early-to-mid autumn.
There’s a Harvest festival held during Izax’s harvest, that used to be dedicated to thanking Izax for a bountiful harvest. The festival was expanded to a more general theme of gratitude and reflection later on.
People born in this season are said to have a commanding presence and a level head, but on the flip side they can be overpowering and stubborn.
Force Sensitives born under this sign have a chance to become Chosen of Izax. Born leaders, with potential to fall into tyrannical tendencies. It is said Valkorion is a chosen of Izax. Although some argue he is a chosen of Zildrog.

Nahut’s Shadow starts when Zakuul enter the shadow of the other planet and\or moon. It is marked by weather getting progressively colder, plants withering or going into hibernation, and overall gloom.
Nahut’s Shadow ends at the darkest day of the year, marked with a feast dedicated to honoring the dead.
People born under Nahut’s Shadow are often said to be secretive and brooding, and often rebel against their surroundings. They take no shit but can do a lot of harm, to themselves and to those around them.
Force Sensitives born under Nahut’s Shadow can become Chosen of Nahut. However, Chosen of Nahut are rare and there is a high mortality rate among them as Nahut’s blessing is more akin to a lycanthropy curse. Those who survive long enough slowly change into sentient beasts, receive visions of the future when interacting with blood, but those visions are often violent and horrifying, corroding the Chosen’s mind. If the CHosen survives with their mind intact, they are granted the strength and senses of the beast, as well as the ability to hide in the shadows. Usually the surviving Chosen are taken in by the Scions of Zakuul, but there hasn’t been a Chosen of Nahut in over a century.
It is believed that the founder of the Scion order was a Chosen of Nahut.

The coldest and part of the year. In the past it was often marked with famines and fighting for resources among Zakuul tribes.
People born during this time can be cunning, resourceful, and ambitious, but jealousy is their downfall.
Force Sensitives born under the sign can become Chosen of Esne. Theirs is the power of speech and manipulation, and they are often at the center of trouble as envy gnaws at them from the inside.

There’s a constant debate in the Zakuulan community whether or not Chosen of Zildrog exist, and people argue if Valkorion is a Chosen of Izax or Zildrog.
If they exist, they are extremely rare, and are not confirmed to exist.
Basically Zildrog’s sign is to Zakuulan astrology as 13th Sign (serpent bearer) is to Earth Astrology lol.