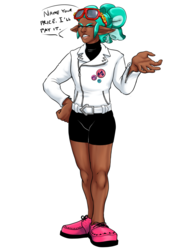 Ylva and Mei get caught up in a fight after being forced on a team together, but it turns out these two can’t seem to stop fighting even when splatted. Since they couldn’t stop fighting the respawn machine messed up and put them in the wrong body!!

Hey, if Squid-fusion is a thing, why not body swap? >:3c
(squid fusion can be found over here! http://asktheseastars.tumblr.com/post/145291769962/splatoon-inkfusions-a-quick-powerpoint-explaining )

Inspired by a conversation with @an-island-of-bunnies on Tumblr! Ylva and Mei don’t like each other, but what kind of shenanigans would they get up to if their bodies got switched around?