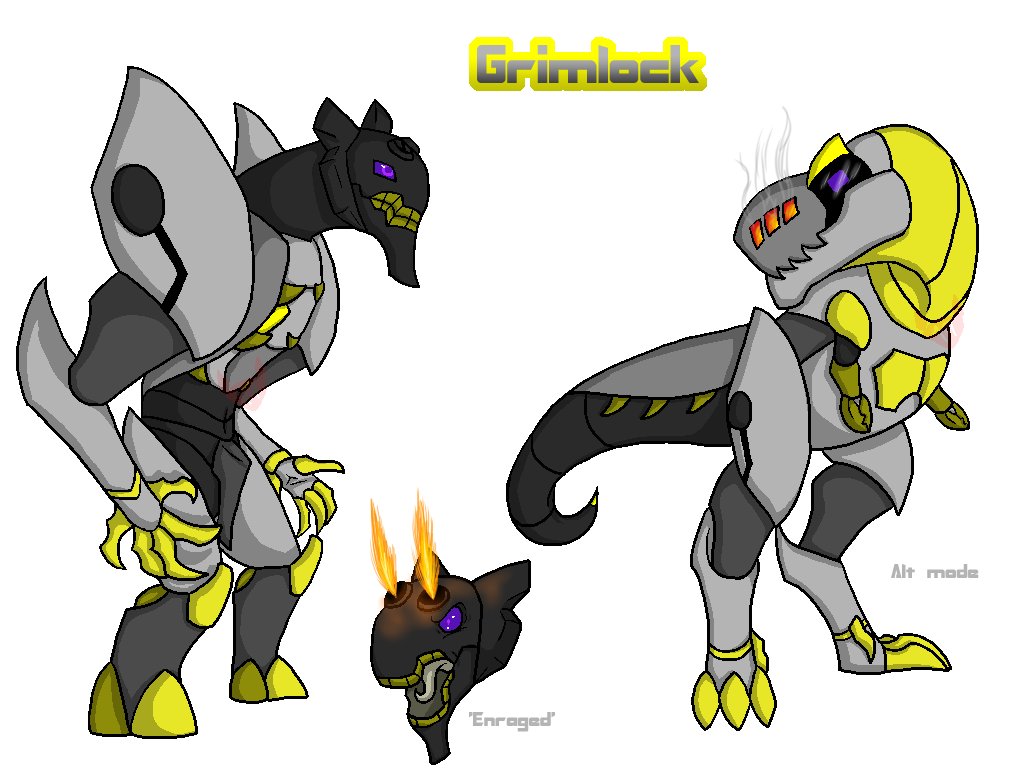 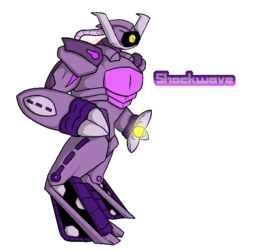 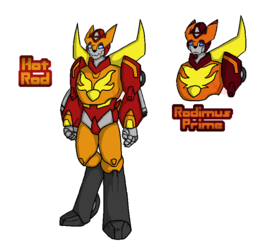 Info:
• Was sent to Kaon to be a gladiator due to his strength and aggression levels.
• Ended up being one of Shockwave's 'experiments'.
• Shockwave experimented on him to test the use of emotional circuitry the result was Grimlock becoming stronger the angrier he is, however, it leads him to overheat and 'burn out' faster.
• Grimlock found some pleasure in being a 'gladiator' however they only ever seemed to throw Technimals at him rather than fellow combatants.
• Grimlock ended up in contact with an outside source - Wheeljack, who was also a scientist but unlike Shockwave, found the questionable morality of weapon designing (only to test on unwitting fighters) a bad use of his smarts. Grimlock wasn't quite interested in this contact at first until Wheeljack revealed that he knew of his 'burnout' problems and wished to help.
• Through this contact, Grimlock managed to become less angry and managed himself better.
• Grimlock met the other soon-to-be Dinobots in Kaon, including Swoop who was actually the one Wheeljack tried to contact as Swoop was meant to be a new apprentice at the scientific institute Wheeljack worked at, yet somehow was sent to Kaon with no explanation.
• All of them ended up as Shockwave's experiments which then involved memory tampering to prompt obedience, ruining entire portions of their recorded processor data.
• The primary experiment they were all part of was continuing to test the link between emotions and power/strength levels. Just because Shockwave had no personal interest/use for emotions himself didn’t mean he snubbed them entirely and continued to work on finding potential uses.
• The gang were left as wild animals like the Technimals as Shockwave's "berserker" experiments took a back seat to Megatron's seeming 'uprising'.
• When the newly-formed Decepticons first started attacking the 'Dinobots' were released accidentally during a skirmish with some authority figures.
• Being as wild as they were left they attacked both sides and fled into the troubled wilds, where they became almost like myths as they only ever appeared to destroy members of both sides.
• Wheeljack recognised who they were however and made repeated attempts to reconnect to them.
• Due to his help prior to their memory tampering, Wheeljack was ever-so-slowly successful in helping the group regain some consciousness.
• Ratchet was also aware of Grimlock but agreed to keep it a secret for Wheeljack hoping he was right and this would be helpful for them all.
• A while before they left and ended up on Earth, Grimlock and the Dinobots all sustained major damage protecting Wheeljack and an Autobot base from an attack from Shockwave, who knowing their abilities, had a counter for just about everything they threw at him.
• While their contributions were instrumental in the protection of the base they were hardly recognised among the Autobots.
• Wheeljack, out of loyalty to his friends, kept as much of their salvageable bodies as he could on life support until he could save them.
• He snuck them aboard the Ark as it left Cybertron fearing what would happen if they were found and their memories manipulated again.
• After agreeing the use of more men would be helpful Wheeljack managed to devise a plan to have the group rebuilt resulting in their dinosaurian bodies.
• Grimlock may not get along with almost all of the Autobots but he'll often bend over for Wheeljack if the scientist pushes him.
• He actually bases a big portion of his judgment on people on how they react to things during battle. He feels the heat, energy and high emotional tension of warring/battle will shed light on the true nature of someone’s Spark. This is also why he hardly respected Optimus until the leader risked his skidplate to push the Dinobot out the way of a potentially-fatal blast.
• He's not stupid, in no way is Grimlock actually dumb but his speech pattern of "me, Grimlock" often tricks people into thinking so, telling him he's stupid is one way to fire him up instantly.
• The words are all good and smart in his processor but it's just like his processor and vocal unit get a little confused along the way no matter how hard he tries. This is part of the reason he gets so mad at being called dumb because he knows he isn't he just can't articulate it better than he does.
• Has made some strides with his temper while on Earth.
• During the Unicron wars he and the Dinobots were one of the few if only, bots to directly and physically attack Unicron when he appeared. This resulted in them getting temporary chaos sickness as the section they attacked secreted some energy to dispel them. Grimlock was out sick for three weeks as his sickness resulted in him sneezing sugar and coughing up employment pamphlets for an unspecified role in the Horsehead Nebula as he began napping 'backwards' (Don't ask no one's sure how to explain it either).
• Has “Fire horns” when enraged to blow off the extra energy and to prevent burnout.
• Has a “Land Before Time” on DVD it’s a precious item to him.