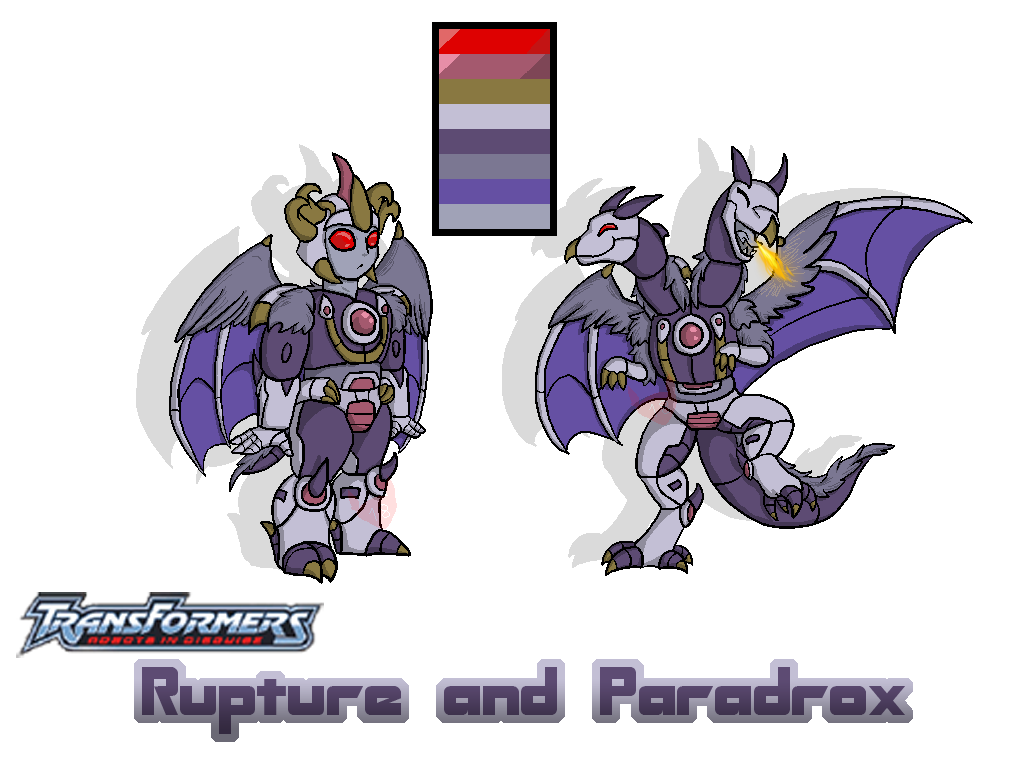 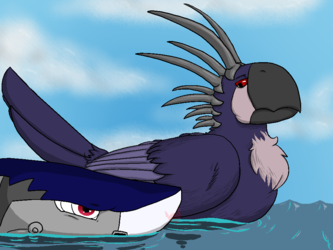 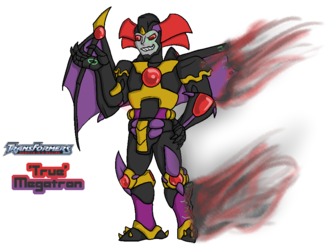 Back story:
The Predacons were now living a cautious life on Earth, still vastly outnumbered by Autobots and now fugitives for escaping prison or aiding in a prison break the group of six did their best to shift around Earth as much as possible to avoid detection, even creating sub-bases to live in so as not to risk their giant home base; The Megastar, from being found.

During this time the bond between Galvatron and Cyclonus was created and cemented as the two took each other on as partners, and, despite certain sharks embarrassment at it, began to found a more careful and parental relationship with their former underlings.

It was sometime later when things got shook up a little when these two arrived, especially as while their sparks were still attached to Galvatron's the Predacon leader was hard to control in his urges to drain energy from, preferably living, sources. They were thankful Galvatron only managed to snag the Autobots Tow-Line who had easily been too distracted by his ‘work’ to see who knocked him unconscious, though the energy draining meant the Autobots knew exactly who the culprit was.
So in that respect, it was a more preferable shake-up when they separated and became members of their little team.
As a tired Carrier slept and a happy Sire cooed over the newbies the rest of the Predacons were left to eagerly contemplate all the cool things they can do now they had younger siblings.

Naturally, with twins, it was good they were so eager to help as they proved a bit of a handful, just like any other Sparkling, despite their identical appearance distinct personalities were quick to shine through. Such as Rupture liking to hide in the shadows before pouncing on someone (Sky-Byte being a favourite) and Paradrox liking to bite anyone's tail should they take their optics off them and be in beast mode.
Regardless it was nice, domestic sweetness that almost brought a new ease to the base, at least, it made them forget about being fugitives and enjoy themselves.

The duo were not allowed outside of the base, not unless the area had been scanned for any activity - human or otherwise - first. Alas children will be children and the two wormed their way out of a seaside base and onto the mainland.

What dastardly, unfortunate luck that they should decide to head on over to the most interesting thing about.
Which happened to be something the Autobots were investigating.

The trio of Autobot brothers had been sent out to examine a portal, or more accurately, a rip in the fabric of space-time. They had suspected it to be a Predacon scheme but found no trace of the incompetent bots around, or of anything for that matter so it couldn’t be them.
Side Burn was the first to notice the duo and all work promptly halted…
They were adorable and far more interesting than the ‘portal’.

Unaware of who the trio was or of any danger Rupture and Paradrox immediately thought it was a game and began to run about as the Autobots tried to catch them.
The group was so preoccupied in fact that they did not notice the terrible monster emerging from the portal until it had snatched Prowl from the ground with one filthy appendage!

Playtime was officially over! X-Brawn was quick to begin shooting upon the squirming mass of a beast to rescue his brother as Side Burn used his speed to snag the babies and pull them away just before another appendage tried to grab them too.
X-Brawn was struggling to fight the monster, even when using his powered up form the beast's flesh was too thick and rubbery to notice his attacks, the Autobot feared using anything stronger lest his brother be hurt, in fact, the only thing he could do was repeatedly shoot it in the mouth, preventing it from eating Prowl.
He made a desperate call to headquarters for assistance in dealing with this thing and for someone else to take the squirming panicked children.

The Back-up he got, was not the back-up he wanted.
Homing in on the panicked younglings the trio of Autobots found themselves surrounded by both a beast and now six Predacons, it was tense for a moment but even the dumbest ‘bot could tell the creature was the biggest threat right now.
Putting aside the weirdness of having to work alongside prior enemies, X-Brawn and Slapper managed to free Prowl through a combined effort allowing the team to engage in a full out assault. Galvatrons hefty flame attacks drying out and hardening the skin of the creature enough for their attacks to begin taking effect and damaging the beast.

Clearly, on the losing end, the creature tried to make a break for it and dived to the side, right towards Side Burn and the children!

Not allowing that to happen Galvatron took the rap for the trio taking the creatures full weight and being dragged along with it as it tumbled to the side.
Distressed and with nowhere to go the creature used the last thing it had and promptly chomped down on Galvatron, taking his entire upper half into its maw! With some minor degree of intelligence, it used it’s captive to ward the group away enough for it to make a break for the portal, ditching a half-eaten, chewed up Galvatron as it went, the tear closing behind it.

While the initial battle was over, for now, the tenseness was not, for now Autobot reinforcements had arrived at the scene and no one knew how to react to the situation.

The Predacons were desperate to leave, there was no way they could just stay around with so many Autobots and NOT be in trouble but they were still surrounded and now they knew of the twins. Twins who were now cuddled up to their Carrier peeping sadly as their Sire and Side Burn stood close-by.

They had to take many group huddles to try and come up with a response to the situation, the Autobots had offered them something too good to be true:
The portal and whatever caused it was still unknown, and clearly a threat to everyone of either side. A truce, their fugitive statuses will be considered… pending, at least until this was sorted and their current ‘additions’ taken into consideration.
It was suspicious for them at least.

They were surprised when the Autobot brothers spoke words in their favour and of Galvatron's actions. Speaking of, they couldn’t deny that they did not have the medical expertise to truly help the chewed up Predacon.
With little to no other options, and as de facto leader Cyclonus agreed upon the temporary truce.

Not allowing Galvatron to be taken to an Autobot base, the Autobots were forced to use one of the Predacons temporary bases to work their repairs on Galvatron, finding the Predacon had suffered something similar to what he’d done to Tow-Line and had been drained of energy. Reversing the process they got donated internal Energon and pumped it through his systems and it worked.
Naturally, upon waking up Galvatron was not best too pleased at finding the Autobots with access to one of their bases but TAI informed him that while he was out cold more of the portals the creature came from had been opening all around Earth posing a threat to everyone on the planet regardless of faction, or age. Getting the hint Galvatron begrudgingly accepted their presence, even if he took to shielding his offspring from them with his wings and keeping interaction to a minimum.

At least the twins were happier with their carrier back as were the other Predacons.

It was not to last, all of the portals since the first contact had been temporary and nothing had come through, but a new one appeared.
It was not empty.
It burned with power and, leaving the children at the base both sides took to confronting the new anomaly.
What stepped through was a monster, but it was familiar… very familiar but no one could put a finger on why. Well, except for one… Though everyone got an idea when the mutated Transformer bowed and with a cocky grin introduced itself:
“Greetings, my name is Megatron and you’re all going to die”

Galvatron had some explaining to do…
Continues: HERE

Personalities:
Rupture is calm and stoic, preferring quiet activities and to watch things carefully before acting, they find proximity to their creators comforting and they’re not usually far from either one. They seem to have an interest in biology and have claimed a zoological book from Sky-Byte’s collection of Earth writings as their own.

Paradrox, on the other hand, has too much energy and gets anywhere and everywhere they’re not meant to be. Anything brightly coloured and fun is where they’re at, and if it’s not they’re making it so! They have a love of dismantling objects and playing with the parts.

Notes/Extra:
• * - They develop extra alt modes like their carrier as they age but do not get as many as him.
• Rupture is Autistic.
• Paradrox tends to hang out with Gas Skunk, Slapper, Dark Scream most. Rupture tends to hang out with Sky-Byte most.
• They cannot fly for long distances yet but can breathe small puffs of flame.
• While Paradrox has a habit of biting their big brothers tails both of them seem to like trying to nip at Optimus’s heels.
• Both of them go by they/them pronouns.
• This is possibly the cutest I’ve ever drawn these two.
• They're completely identical twins, which is why one is showing off the alt mode and the other isn't.