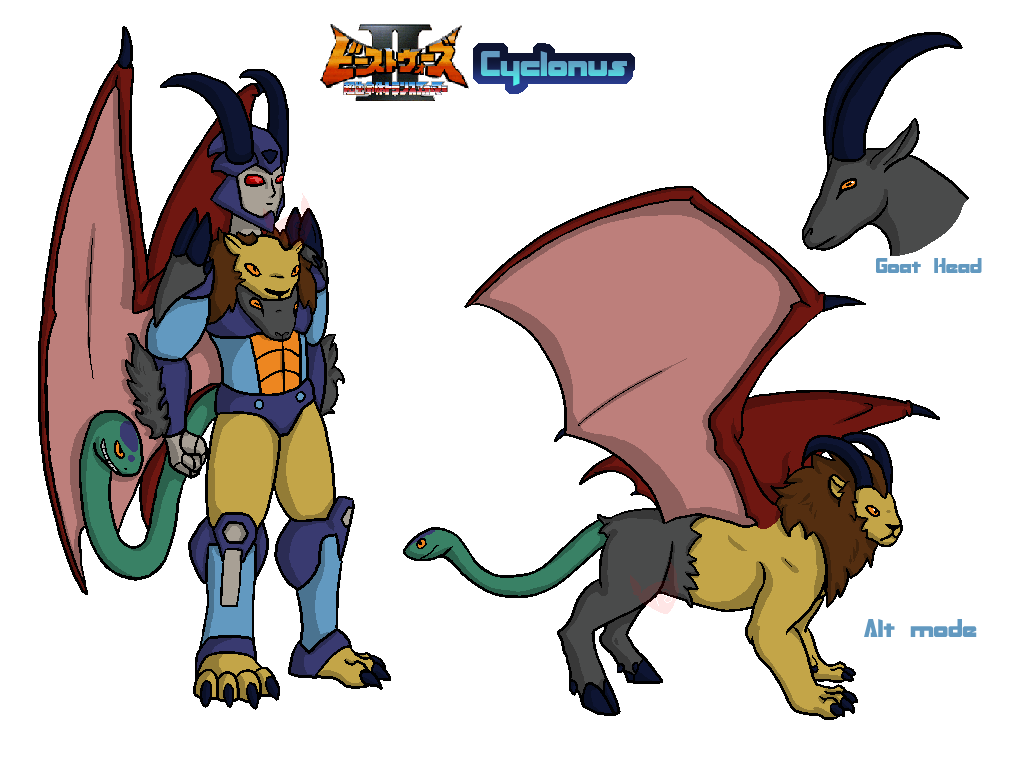 I have been watching Beast Wars 2, it's great, Galvatron really deserves a companion like Cyclonus...

History:
Cyclonus is a renowned warrior, where he goes fights ensue and usually he’s the one getting out on top.

As the Angomois energy began getting stronger on the planet Gaia, Cyclonus was quickly drawn to it, sensing it as an opportunity to get stronger and hone his power and further solidify his place as one of the Universe’s strongest combatants and maybe take top spot!
His friend, and tracker/navigator, Scourge found the planet in record time and made a smooth landing.

Being drawn to the Angomois energy it was absolutely zero time before he encountered the Cybertrons. The gang were incredibly shocked to find a newcomer to the planet, not only that but someone who had scanned MULTIPLE animals, including the ‘prized’ lion form Lio Convoy had.

The strange little fellow who had also arrived with the Chimera pointed out Convoy as the leader and that seemed to be all the encouragement needed, no words but a bellow of a challenge and collided with the Cybertrons leader, the conglomerate of animals was a powerful match. The little Scourge did well with keeping as many of the other ones distracted to keep it one-on-one but they were definitely outnumbered. Even then they seemed to be doing pretty well, Scourge was small and fast and the other was tanking hits and dishing them back out the scuffle was only broken up when the Destrons showed up, Dirge and Thrust managing to bungle the operation causing a portion of the Angomois energy to blow up and the groups to flee.

Invited inside the duo pondered the Destrons here, it seemed they were the only ones who had scanned the organic life as an alt mode. Meeting up with the Destron boss it was an awkward few seconds of silence until Scourge started responding while his friend sat back.

Scourges diminutive size betrayed the chatty negotiator within him and he discussed the reasons they were there, introducing his silent friend as Cyclonus, who upon mention of his name transformed to greet the group, causing a bit of a sputter with his height. Even Galvatron came to a bit of a full stop and negotiations unravelled a little without him maintaining a proper conversation.

Scourge and Cyclonus decided they’d rather stick it out on their own most of the time and find more foes to battle, but they would dutifully return to the base if they were ever called upon or needed.

Which was sooner than expected, the SIC, Megastorm popped up almost immediately demanding Cyclonus’s service.
He didn’t make a great first impression getting angry and snappy when Cyclonus would only wave his hands at him and Scourge would talk for him, he didn’t want that tiny wimp! He wanted the big guy!
But if he had both of them helping, maybe it would be a better outcome for him.

He told them his woes, how his brother was “totally unfit” to lead, but just wouldn’t go or leave.
The duo didn’t seem to think so, odd yes, but not ‘unfit’?
Megastorm insisted, pointing out his weird behaviour earlier when they were talking.
They agreed if anything to get him to shut up.

Clearly the intent was for Cyclonus to do the dirty work, so he was left to follow Galvatron around while a suspicious Scourge snuck about and got some background info.

“Unfit” seemed wrong but Cyclonus was definitely noticing what Megastorm meant by ‘weird’. He’d stammer, make weird noises and fumble about while building/using things usually whenever he asked him anything. At least, unlike his brother, he knew sign language.

He did nothing that day and Scourge reported back.
Starscream let him know that Megastorm was “a power-hungry little prick” and “lacked the same level of care for his brother that his older brother had for him”, but Galvatron never accepted the truth of his little brother even when it was obvious.
Well, that was disgusting.

Again Megastorm showed up and was furiously snarling at them for being abject failures.
Gosh he really was annoying.
Cyclonus would’ve smashed him over the head was he not SIC.

He kept coming back for days and demanding them to do this, over and over as if they were actually willing to help him, stubbornly refusing to notice that they weren’t interested at all.

“I don’t care how you do it! Just take him out!” The green tank snapped furiously before storming out.
“Gosh, what a brat” Scourge tutted, giving a glance back to his friend, “Oh well, we don’t have to follow him any… way? Oh, I don’t like that look, you have a plan don’t you?”

Cyclonus did exactly what he was told, he asked Galvatron out.

He’d brought the pink emperor outside with a bottle of oil, and poured them a drink each.
Galvatron remained quiet, remained weird, he babbled nonsensically and made weird conversation, glancing about Cyclonus spotted Scourge who’d followed them to ‘keep away interlopers’ but Scourge pointed and waggled his eyebrows.
Cyclonus looked back at Galvatron, back to Scourge and back again.

Ah. The gibberish was only because he’d already got the hots for Cyclonus!

Well that put things in a different light and now Cyclonus just couldn’t make the right-hand gestures back, well this was now a mess.

With both of them now thoroughly awkward and not paying attention Scourge clambered up Cyclonus’s back
“Well, I think we need to set you up on a few more dates!”

He's loaded with sass and enjoys letting people be lulled into a false sense of 'security' around him before he sasses them out and shatters their day.
He prides himself on his new position as Predacon co-leader and father, he likes to lead by example and teach his family how to be strong and smart as they grow all while doing his best to keep them as happy as can be, nothing brings him greater joy.