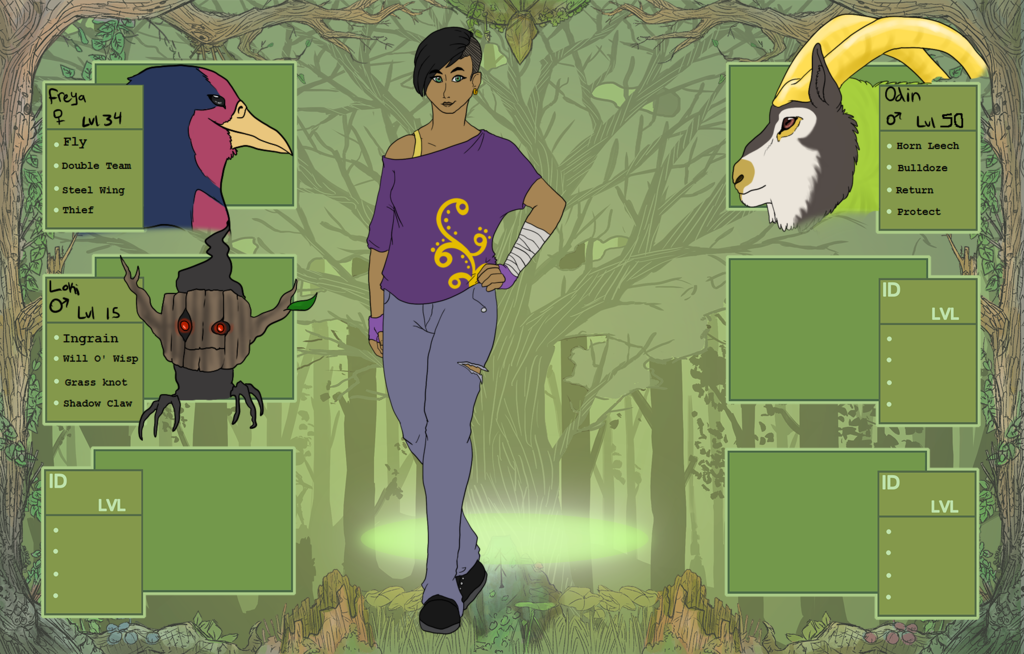 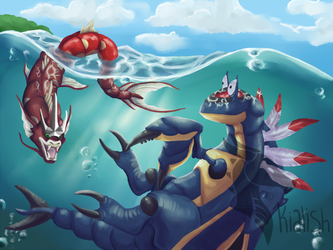 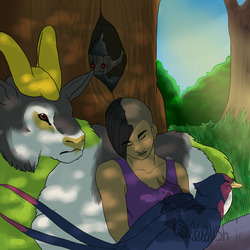 Well I found a neat pokemon related art and RP group, and since it wasn't an OCT I thought I'd actually give it a shot ;o; most OCTs of the past rejected me so I had stopped applying :,3 BUT NOW MY ART IS BETTER And Biome seems like a nice stress free environment to get my poke on ovo Pokemon Biome <<< for the interested!

Name: Shera Tielik (SHARE-uh TIE-lick)
Age: 23
Gender: Female
Height: 5'6"
Birthday: August 15th
Occupation: Adventurer
Personality: Shera is a spunky, rocky climbing, mountain hiking, tree scaling chick. Despite living in a more 'fancy' and 'clean' establishment, she always had an intense hunger for the outdoors and what laid beyond the next hill. She has a nearly insatiable curiosity, and a just as insatiable desire to learn. However to be taught by a teacher isn't entirely up her alley; she wants to see it all for herself, to put two-and-two together in her own way. She is also a very loyal individual, and trusts very easy. But, being raised in a Biome where trust and neighborly love come as easy as a smile, it's not hard to see why. When she angers, it is a slow seething anger. Starting out small, she rarely brings it to attention, until she has simply had too much and she explodes like a Voltorb. This causes a lot of confusion to those who have upset her, because in many cases, they don't realize what they did wrong, just that suddenly Shera is very angry at them. After an anger explosion, she retreats and is often left in a depressive stasis for a few hours, to which she comes around and eventually apologizes to the offending party.

History: Born in a tree top settlement, Shera lived with parents who, despite their earthy home, were very picky about cleanliness. They were homebodies and herbalists, staying around their town and rarely venturing far, cleaning the dirt from their fingertips like a religious ceremony. Dirt, although necessary in life, was unclean and could cause illness. Shera was never fond of it, loving the dirt beneath her nails and leaves in her hair, but her parents would never have it. It caused a sense of alienation between herself and her parents, and as she grew up, she began to venture beyond the trees and into the deeper wilderness for hours at a time. As a teenager, she would sit in tree tops and observe the pokemon below, from the small stantler herds, to the Venusaur mother and children, to the bug pokemon that often watched her back with the same curious interest. Her parents knew there was little they could do to stop her, but once she was within their walls once more, she would be forced to clean up and be proper.

One day, when venturing several miles out from the treetop town, she stumbled across a shiny Skiddo, white fur and golden horns sparkling against the sunlight. It was cornered by an Ursaring, probably hoping to make a quick meal out of it. But, as Shera emerged from the bushes to help, the Skiddo charged the Ursaring, slamming tiny horns into the bear pokemons legs and goring it. The pain was enough to confuse the Ursaring, and Shera dived in, grabbing the Skiddo and darting as far away from the Ursaring as she could get. That was how she found Odin, her very first pokemon. The Skiddo, after being put down in a safe area, began to follow her. All the way home. Her parents allowed such, hoping the grass pokemon would keep their daughter closer to home. It didn't. Once it evolved into a Gogoat, Shera decided she would depart from her family and explore as much of her Biome as she could. Eventually, she hopes to venture into the other biomes as well.

Relationships: N/A
Additional Notes: Her left arm is bandaged from a more recent fall where she scrapped it up something nasty. It will most likely scar but for now she keeps it wrapped up with an herbal poultice to reduce the chance of infection.
Battle Tactics: Her primary attackers are Freya and Odin, since Loki is still fairly young. Odion can easily wipe out most problematic pokemon in a few hits, however Freya has the advantage of being a flying type and easily eliminating bug and grass threats.

Personality: Brave Natured
Short History: As stated in Sheras history, Odin was found as a Skiddo trying to drive off an Ursaring on his own. Ever since she saved him, he refused to leave her side, forming a long term bond with her.

Personality: Gentle Natured
Short History: In her explorations there was a day where the wind turned unexpectedly harsh and a storm blew into the redwood forests. The rain was violent and the storm loud, and during the aftermath there was much devastation. The trees, of course, stood tall and proud, maybe a few getting struck by lightning. But the pokemon were often not as lucky. Freya was a Taillow, her entire nest thrown to the ground. No other of her sibling chicks survived, and the mother was nowhere to be seen. Shera took her and raised her to full health, keeping her.

Personality: Naughty Nature
Short History: Shera didn't save this pokemon, instead it came to her. Tiny and mischievous, the Phantump followed her for days in the darker old woods. It would play pranks on her and frustrate Odin endlessly by tugging on his tail and disappearing from view. After several nights of struggling to sleep, with the Phantump constantly waking her by giggling in her ear or trying to steal her stuff, Shera finally pinned it with Freya and captured it. Since then, she's grown a soft spot for him, but doesn't let him out often since he does go after people and pokemon alike. Including a very very angry zangoose.

RP Info: I usually use Skype and/or GoogleDocs! GoogleDocs makes it easy to keep track and store, but Skype is more convenient. However, I like using BOTH. Skype to discuss things and GoogleDocs to write it out : ) if interested, let me know and I'll give you my Skype and we could set up a GoogleDoc or whatever!