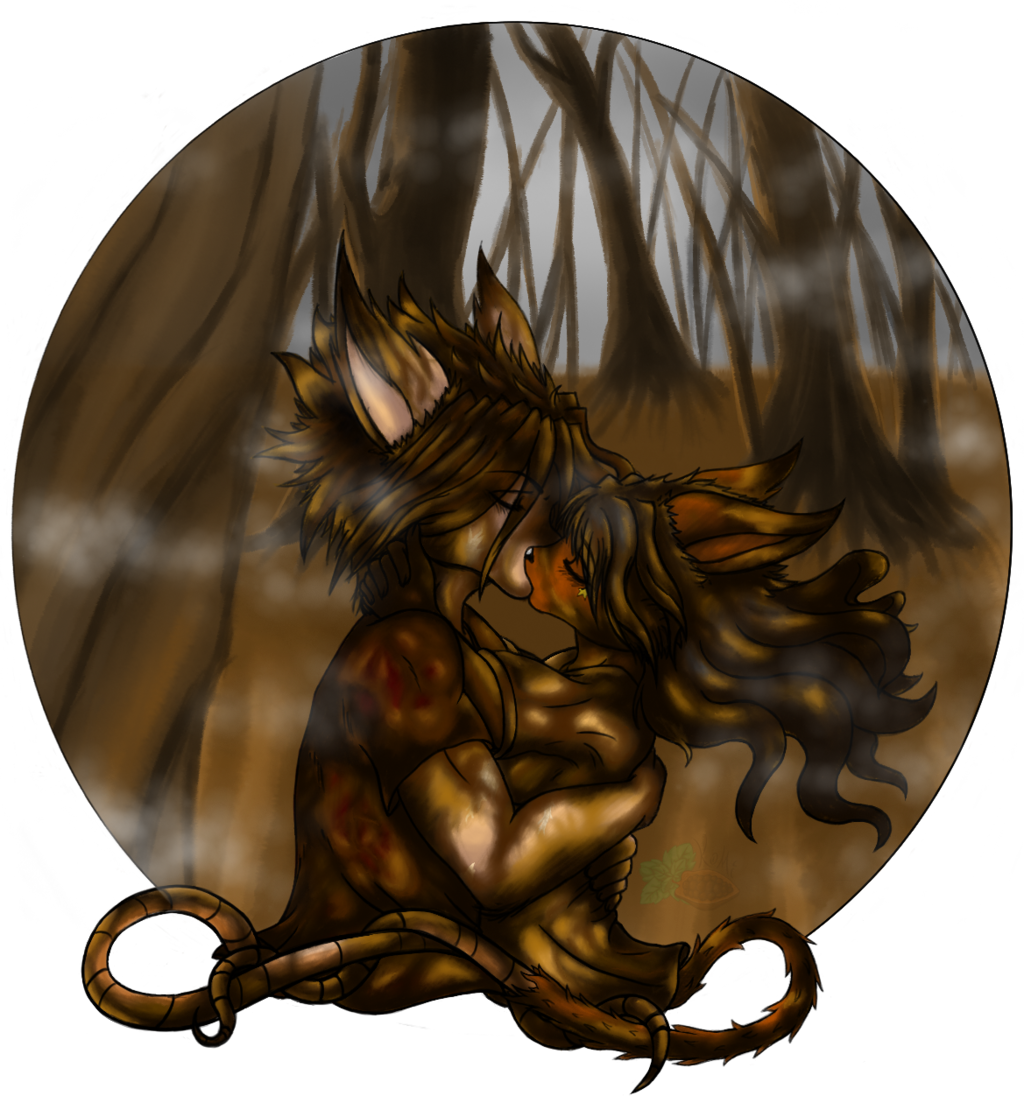 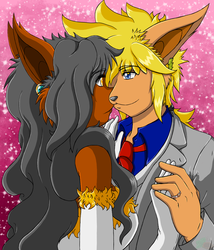 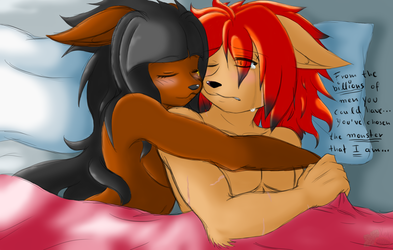 Yes, I took my time and updated this picture.

I wasn't very proud and happy with how the background in the 2014 version looked like. Not only that, but I also forgot to look over certain mistakes and never bothered myself to add the fur on Namid's tail.

This new version is not only a minor 'update' to the 2014 version. I wasn't just putting fur on Namid's tail or corrected the mistakes, no, I also overworked the background and made a circle around it so the background doesn't look like the sh!t I produced in the 'original' picture.

Granted, I asked Koriyuki-Ryuumi for advice because I wasn't really sure if I should use a circle or an ellipse, or if I should take any other shape. The circle was the better option so I could fully focus on expanding the background a bit, and it also worked the best with the idea of letting the Characters wrap their tails together.

Honestly I don't know how long it took me to figure out what kind of Brush Tool I used for the Background and the Characters. I used many different Brush Tools in this picture and it really was grinding my gears finding out which one I used for what.

Nothing else to say about it, really.

To those who don't know and want to know what's going on (feel free to ignore it):
I was writing a little Fan-Fiction / One-Shot Story about Axel Gear and Namid just for fun back in 2014. While I think my writing is shit beyond believe it was sort of a help for me to help me build up certain relationships with the Characters of the Rocket Knight/Sparkster Franchise. It's also the reason why this picture exists in the first place.

After knowing each other for more than 8 years, fighting against one another, traveling together as allies (with other group members of course, not just them alone), billions of up and down situations in any direction possible it just happened that, sooner or later, there will be a strong bond and awkward chemistry between them that makes it impossible for both to stay together for long, but also impossible to stay separated for long. It's very hard to tell how you could sum up their relationship in a whole. Let's just say that they tend to insult each other on a daily basis, trying to gather the 'Alpha' Role in their relationship and they're not afraid to embarrass the other in front of others. But at the same time, at least once they both calmed down and they really are in privacy, they both show more of their tender side around each other. Both are hotheads, but exactly because of their strong personality they know they can rely on each other, even after having a heavy argument that causes them to part ways. They only feel very safe within their relationship as soon as they can be themselves without anyone else around them. Being able to put aside their strong-willed personality and just show their weaknesses in front of one another because they never would judge the other side as being 'weak'. Sometimes they just don't even need to use any words to comfort each other. It's all a matter of trust and being able to say 'sorry' in a sincere manner if one really screwed something up.

"Shipping" Axel Gear with Namid was really just nothing more but an afterthought. A "What if" idea. I don't even like to talk about this but look at me. Here I am. Telling you guys that Namid, a Fan/Original Character of mine, is "shipped" with Axel Gear. A villain/rival type Official Character. I'm breaking new grounds here guys. Be afraid, I'm a MOFO badass. -puts on sunglasses- burn me to the ground, please! ;__;

I'm very strict when it comes down to "Shippings", but I like well-written / well-explained Shippings - No matter what type of Shipping it is. But I'm not taking Shippings as a "Serious Business". I do it for fun. To experiment around here and there.

In normal circumstances I stay away from Shippings due to the dangers of ruining the personality of a Character. Believe me when I say that I always ask MetalByakko or Koriyuki-Ryuumi about Shipping ideas so I'm not rolling down the Shipping Route of "They're just together because they look cute together!!" or because this certain Character is "popular". How often did I ask them? Billions of times. How many ideas actually came to life? None except this one and the one I run with MetalByakko. He's the reason why even a Sparkster x Namid Shipping exists.

What I'm trying to say is that Axel Gear may be a villain, a serious and dangerous one at that, but I think he also can show that in certain circumstances (and if the Franchise would be developed a bit more and the Characters would get some more Character Development) HE can have a slight weakspot as well. Who knows? Maybe he is a guy who attracts females with ease and we don't know about it. You know, being a little casanova / heart-breaker. Maybe he can just open up around people he truely values as friends. Maybe he finally moved on with his feelings for Princess Sherry and waits for someone to find him instead of him finding 'her'. It depends on one's own interpretation around him as a villain and overall Character.