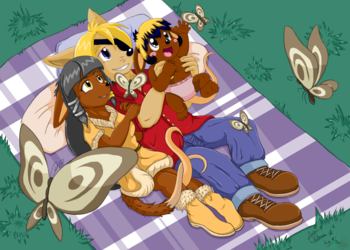 Colored Version of TabbyWesa's http://fav.me/d8j86n7 Sketch Collection. I asked her for the .PSD file so I could color it.

ACTUALLY I wanted to do a clean Lineart and then putting some colors into the picture, but when I was nearly finished I felt like that I 'softened' Kaji with the smooth lines I used. Lastly I scrapped the Linearts and left the original sketch untouched, but simply added a single layer solely for coloring the sketches. This is the outcome.

I know I need to learn how to work more correctly with the highlights, but I liked the results the way they were, and I wasn't trying to go into a super complicated coloring route. I simply took something that was fitting to the sketch, and stood with the Watercolor Tool.

The only mistake that I did was that I gave Kaji back his eye patch in the far right sketch. To be fair, he absolutely dislikes it when people stare at him while he's having his eye patch removed.

Does that now mean that I destroyed the purpose of the sketches? ...Yupp, I totally did!