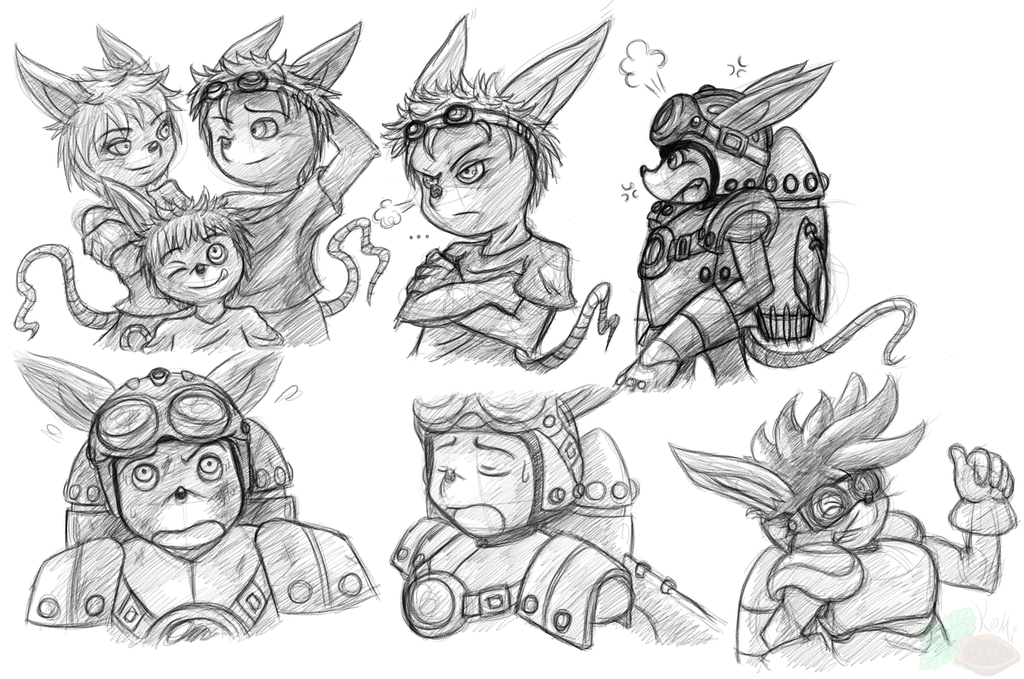 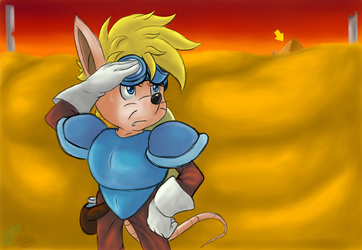 Holy shit, it's been a while since I drew this lovely opossum guy.

I finally was able to play the 2010 reboot game Rocket Knight after waiting like 4 years and guess what: I LOVE IT. It's even better than I expected. Playing it by yourself and watching Playthroughs of it sure is a giant difference. Well at least I can say I played 'em all.

Currently I'm working with that awesome program called 'MyPaint' that I downloaded about 2 weeks ago and holy fuck it's a breeze of fresh air. It really helps me out with drawing digital stuff. Seriously this small little doodle collection was done with MyPaint and not scanned - it still blows my mind.

Got inspired by the artstyle that PeterLumby used for the Rocket Knight 2010 game and tried to somewhat imitate his style. I don't know if I can say that I succeeded with that plan but it definitely looks better than this here: http://fav.me/d4n0cvc, doesn't it?

Aaah Sparkster... One of the many Anthropomorphic characters that hit the spotlight in the early 90's when SEGA hit the market with Sonic the Hedgehog as their mascot. There were plenty of Sonic Rip-Offs like Bubsy, Aero the Acro-Bat, Wonder Dog and a lot of other characters that tried to be as unique as Sonic was, but out of all of those characters Sparkster was the one who is the most memorized one.

So, who's Sparkster and what the hell is Rocket Knight you might ask if you never grew up with that little fella. I try to make it as short as possible for a little background information to those that don't know about the franchise and the character.

First of all I never grew up with Rocket Knight when I was a child, but thanks to Koriyuki-Ryuumi who owned a copy for her Mega Drive/Genesis console I was able to get to know the franchise a little bit. And yes, interestingly it blew me off faster than I could count up to 3.

Sparkster lives in the world of Elhorn, Kingdom Zebulos (which was a misstranslation in 1993, the Kingdom's real name is Zephyrus which was corrected in the 2010 Reboot by Climax Group). He lost his parents in a great war and was raised up and trained by Mifune Sanjulo who was a close friend to the King and leading Rocket Knight. The Rocket Knights were formed to protect the Kingdom from any intruders and to prevent great wars. There was also a young Opossum called Axel Gear who also was trained by Mifune in the exact same time. Both Sparkster and Axel were very talented fighters but only one was supposed to be the new leader of the Rocket Knights, and after a long discussion Sparkster was chosen. Axel Gear wasn't very pleased with this result and his jealousy grew into a deep grudge. One day he heard about a rumor that his master was protecting the ancient book that contains the secrets of the Rocket Knights. He was caught by Mifune himself by the attemt of stealing the book, only to cause a fight between master and student. Mifune was badly injured and later unable to catch up with Axel Gear. Sparkster, shocked by the bad news of what had happened to his adoptive father became the new leader of the Rocket Knights and chases after Axel to take revenge. Many years have passed away since he left the kingdom of Zebulos only to be in middle of a war when he came back, and as Rocket Knight it's his duty to protect the kingdom at all costs.

To be honest the background story is told in many different ways so I can't tell if my memory served me well with the informations I gathered throughout the years. Have mercy with me!

Enough of this story telling though! If you guys haven't played these games I recommand them because they're awesome, just don't be confused about the sequel of Rocket Knight Adventures. In 1994 Konami released 2 games of Rocket Knight entitled "Sparkster" for the SEGA Mega Drive/Genesis and Super Nintendo. The Mega Drive version is the sequel to Rocket Knight Adventures while the Super Nintendo version is a stand-alone title which shares a few music themes and graphics with the Mega Drive sequel but still has its very own story. There's also a 2010 sequel for the Xbox360/PS3/PC called 'Rocket Knight' which was developed by Climax Group as a downloadable game. The redesigns for the characters/franchises artworks were done by PeterLumby.