i can take trades and requests and honestly i will gladly draw you anything you want, go ahead and ask me! its free and quick so why not?

i cant take commissions because one: im underage to get a paypal and two: even if i could lie about my age by one year, im really just DONE with that site like honestly wow so annoying. my mom also wont let me use hers so fuck that. also three: i really dont think i want to sell my art for money yet anyway???? its all good im just experimenting and finding out what works best, so requesting stuff will help me a lot actually!!

if you want a trade or request, just tell me what style you want. like if a certain picture got you thinkin about requesting something, tell me which one and ill use that style and all that junk. i can do traditional too, but i dont post that here. check my tumblr for examples of my traditional art, but honestly i need to update it with more recent stuff.

im usually really quick with art, and maybe itll either seem like i finished WAYYYY TOO FAST for my own good (as in like an hour or two), or itll seem like years until i get it done (like literally weeks). if it goes three days without me getting back to you, please message me and remind me of it because it would be much appreciated! feel free to converse with me on tumblr, too, if you use that more frequently. im on both sites equally, so ill definitely be able to get to you either way!

Most recent: altered for princehyena 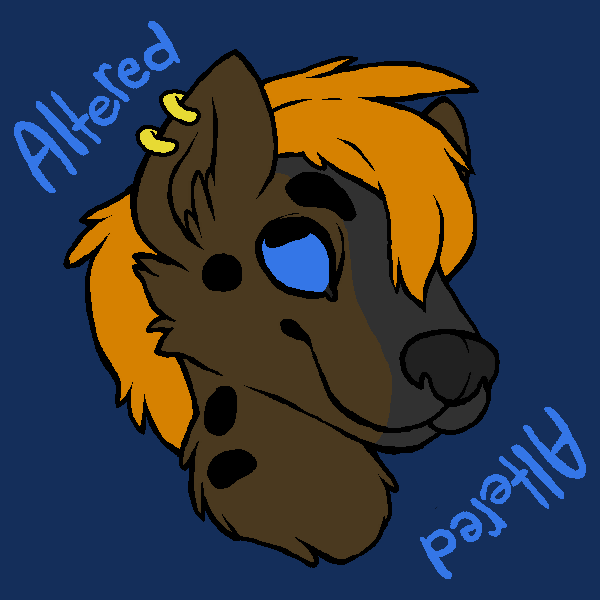 got these from tumblr so some are tumblr related yeah

A. If you could get away with one murder in your lifetime without any legal, social, or emotional repercussions, would you kill someone?

B. What is your first thought when you receive a message on Tumblr, are you excited for the idea of someone from potentially the other side of the world wanting to talk to you or fearful that someone will criticize you?

C. Have you ever looked down on someone because you thought your religious views were superior?

D. Would you rather know everything the universe has to offer but in exchange lose all emotions or remain the way you are now?

E. If you could live and be healthy without sleeping or eating/drinking, which would you cut out of your life?

F. If you could take on the exact body and form of anyone else on Earth, who would it be?

G. Would you rather burn or freeze to death?

H. If it meant it would solve all world hunger, war, disease and bigotry, would you spend the rest of eternity in Hell?

I. Was the first crush in your life something you had or something someone had on you?

something i had wow

J. Could you live without having sex ever (again) in exchange for eternal youth?

K. Have you ever watched a full length pornographic movie?

hell no how boring

L. The Beatles or The Rolling Stones?

M. If you could have the ability to manipulate matter or energy, which would you choose?

N. What was the worst nightmare you ever had?

hard question all of mine are surreal and only scare me after-the-fact so i guess if i were to actually explain the scariest one i would look really dumb and superstitious.

O. Would you rather spend one year with your one true love just to never see them again or the rest of your life with second best?

P. All the sequels/remakes/adaptations/rip-offs in movies nowadays, good or bad?

R. Do you have any (secret) feelings of bigotry to any group of people?

T. If everyone in the world would automatically only know one language, which language would you choose?

U. If you were old enough and not in a situation where it would be inappropriate, would you sleep with one of your (past) school teachers/professors?

neutral. depends on what you define religion as, i guess. if you mean structured religion as we know it then fuck yes it would be gr8 but if you mean literally every belief possible about things that arent cold hard scientific fact then yeah fuck that noise thats boring.

W. The men's rights movement, legitimate cause or laughable, and why?

X. You can eliminate one of your five senses to substantially strengthen the others, which one and would you do it?

Y. Do looks mean anything to you? Don't lie, could you fall in love with someone you thought was ugly?

yeah def i could fall in love with someone i thought was ugly. i mean eventually because i loved them i would see them as beautiful, you know? i mean i also have weird beauty opinions so idk i usually think ugly stuff is pretty anyways.

Z. Can you understand the mindset and logic used by the opposite spiritual opinion? An atheist understanding the belief in a higher power and vice versa.

uh yeah?? but i mean i dont know if i really consider myself WHOLLY athiest since i do believe in stuff but not a god or a higher being or any of that stuff. idk. but i get why people believe it.