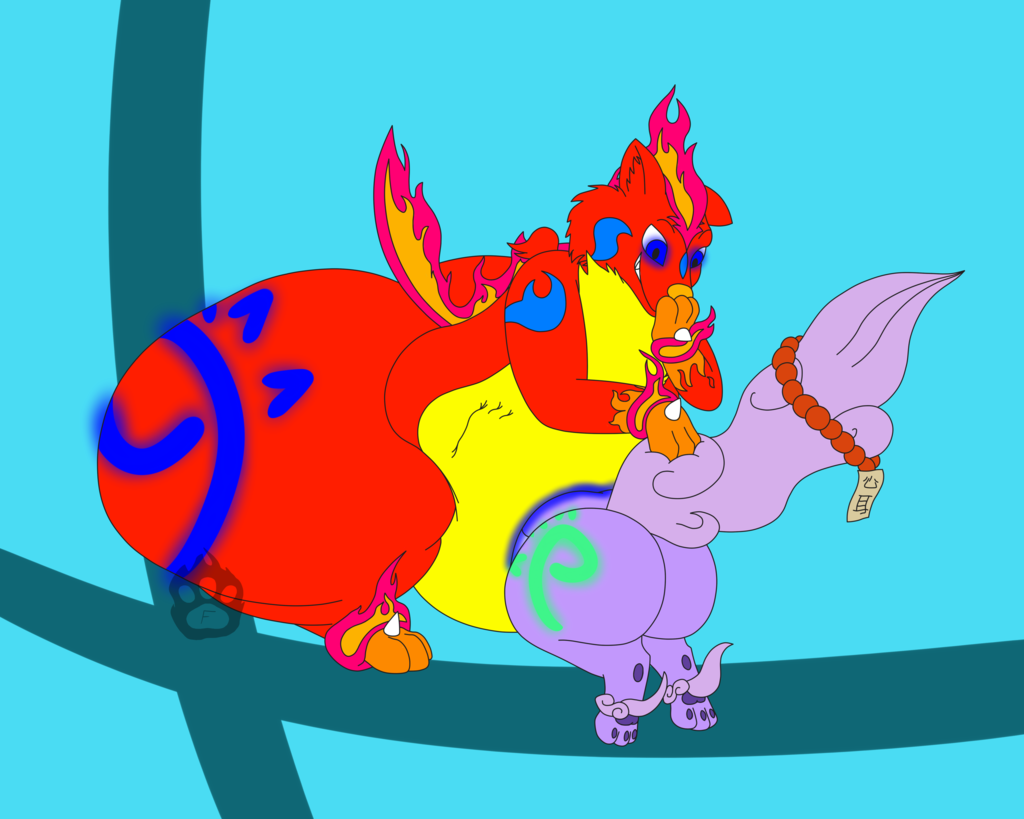 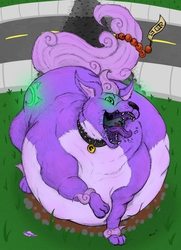 Shadoxes typically stay very corporeal. Despite our nature as 'ghost dogs', it's simply a lot more convenient to have a physical body around a lot of times. It is like a form of clothing though; we 'build' our canid bodies ourselves, using spectral energy that our souls (aka our 'true selves'; we're far more powerful and autonomous than a generic soul) can control. This makes us a little closer to an undead than a ghost when we're 'clothed' with a body, though our spectral powers can also keep those bodies entirely alive and free of decomposition too. It's all very handy, as you can imagine!

But sometimes, a ghost just wants to be a ghost. How fortunate then that our powers allow us to augment our physical bodies with ghostly properties for a time! Flare the Shadox demonstrates such an event here, making his body temporarily incorporeal. Just long enough to, say, stuff a fellow 'Doxy like me right on through his gut's fur and skin! A one-way trip to a creature's belly was never so easy and quick to make, and in no time at all he had packed me away into his stomach. A quick turning-off of his ghostly-state meant the fleshy walls entrapped me in full physicality once again, leaving me quite unable to escape as he belly started to gurgle and glorp~

Oh, certainly, I could turn turn incorporeal myself, but...well, he'd gotten me fair and square! So fair enough that he churn up my current body and add that to his already-copious butt-fat. Amongst Shadoxes, it's simply polite to let a fellow ghost-dog digest your body if they manage to catch you; it's not like that does any real harm. It'll be a bit for my soul to float back out and build a new body, but the inconvenience is merely that - an inconvenience. It just means that, next time, I'm gonna have to try to eat HIM in revenge. ;3

This was a cutie pic that Winged-Kuriboh did of his Shadox-self and mine. ^_^ Showing off more ghost-dog powers in turn! What a greedy fat fire-Dox Flare is~

It is indeed true; Shadoxes regularly and casually consume each other just to be playful, right down to and including digestion of their bodies. This is because every Shadox can simply float their soul back out of a pred's stomach and reform; thus, it's merely a little game they play with each other. ^^ However, Shadoxes can also optionally devour and digest souls; that is the primary way a Shadox 'charges' their spectral powers, as it's like a battery. It is VERY taboo for a Shadox to digest another Shadox's soul; this actually kills the soul-eaten Shadox, and so turns a little game of 'haha I gurgled you! you try to gurgle me next time' into something much more serious.

In other words, most Shadoxes are very competitive and will hunt each other, but not in any malicious spirit. It's like catch and release fishing; a strict rule of 'eat your fellow Dox however you want, but always let their soul go'. Any Shadox that breaks this rule is definitely black-marked and will probably get the same treatment back at some inevitable point...

And there's another session of 'random Shadox factoids'! I hope you enjoyed~