Always Specify WHAT a Shadox Should 'Fetch'! - by CreamsicleCat & Me by Charem 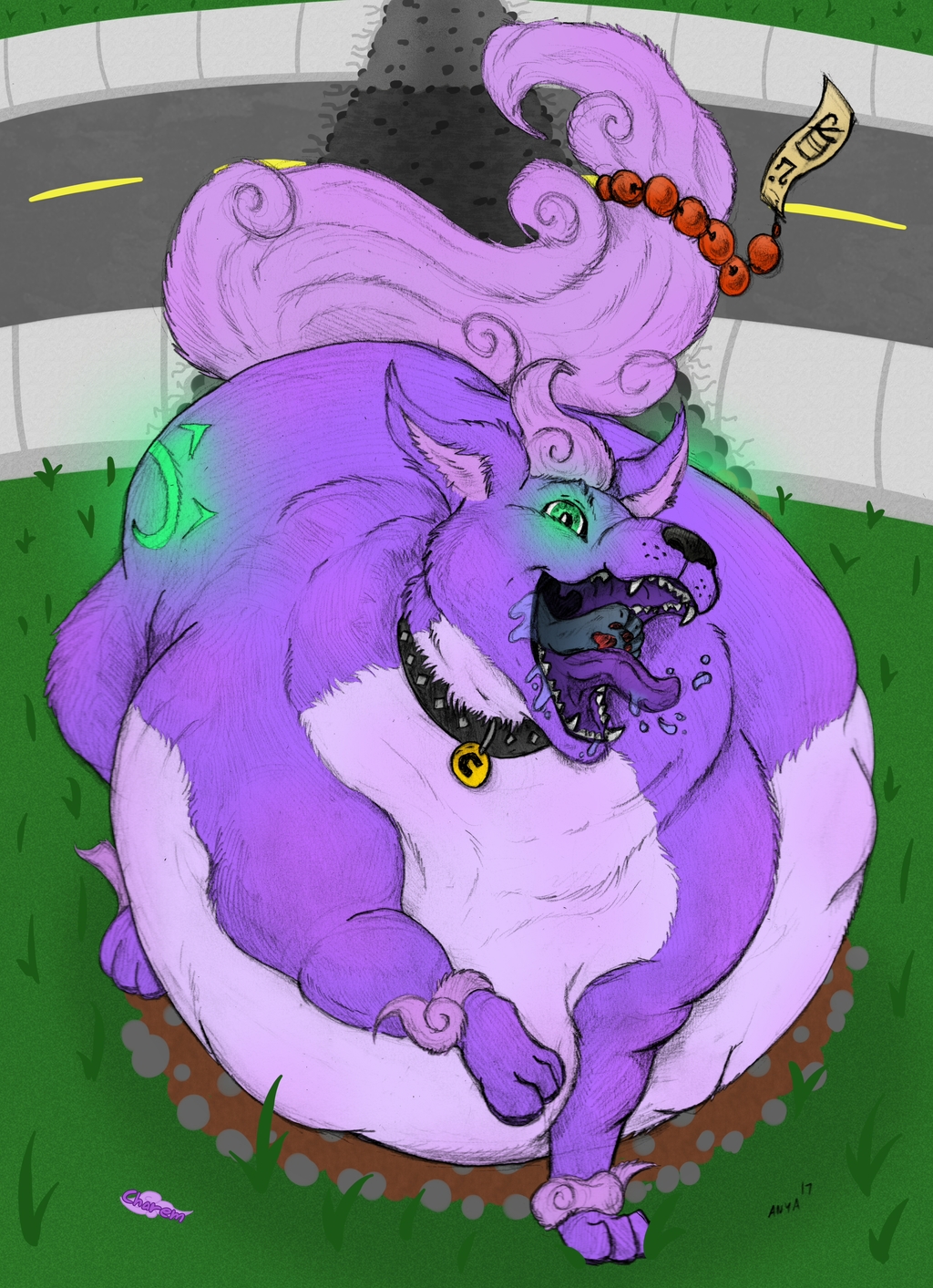 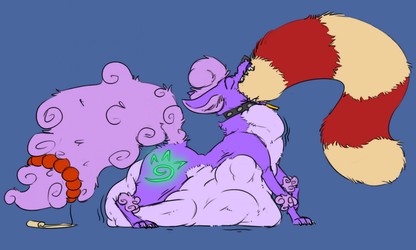 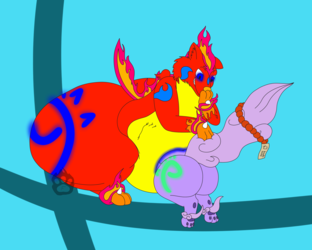 Always Specify WHAT a Shadox Should 'Fetch'! - by CreamsicleCat & Me

We Shadoxes might be ethereally-augmented, supernaturally-based ghost-dogs, but we're still DOGS~ We absolutely love to have a nice Masterly companion to hang out with and look up to, and to hopefully please to the best of our ability! That's what makes dogs such fantastic playmates and very lovable; we change into Master-given tasks with all of our energy and gumption!

Dogs can be a little derpy though, huh? I'd say it adds to our charm, but it's hard to deny we can be a bit...dumb. It's partly the lack of independence; we just aim to please so hard that we might miss critical details or nuance. Of course, that's kind of the Master's fault now too, isn't it? At least it doesn't cause that many problems when a pupper makes a mistake.

Well, a NORMAL pupper, anyways. It's a...bit more trouble when the mistake's being made by a very capable ghost-dog...

It really IS your fault though. You hyped me up SO much with that big, juicy stick! Waving it around, slipping it right past my jaws, encouraging me to get it...! And then you made that mighty throw across the park, flying the wondrous piece of wood through the air, and shouting out that passionate command:

And so off I went after it, tearing off for the stick...my drooling mouth wide-open at the thought of it. And every creature, animal, and movable object I came across as I searched for that stick...I grabbed and swallowed EVERYTHING I ran into down my panting, stretchable chops! Yes, I WANTED that stick BAD, that was my ULTIMATE goal...but you had said, 'Fetch!' Not 'Fetch the stick!', but 'Fetch!' By specifying nothing...you clearly meant, EVERYTHING! The stick was merely my main target; and everything you'd thrown it past, you ALSO wanted me to capture! It was clear as day to my excited doggy brain!

But you'd asked for so much fetching...I was a quadruped, and I couldn't hold anything in my paws, only my mouth! So this is why I grabbed everything into my jaws...and GLURRRK'd it all down my throat! Not even my wide, gaping jaws could carry everything; the park and its surroundings were so full of people and animals and picnics and mailboxes and cars and all SORTS of things! But my stomach...well, my stomach could fetch a LOT more than my mouth alone! It only made sense~

Eventually I did find that stick. I had to really scour the park...and eat even more things than if I'd just gone in a line! But that was okay; less things undevoured just meant less places for the stick to hide. Eventually I found it under a park bench...after eating the bench, it was quite easy to notice! Yay! I grabbed the stick in my mouth too...and, given how loose my throat and jaws were at this point, it just tumbled down my gullet too! Oops; well, I guess that works!

Of course, being the REALLY GOOD DOG I am, I made sure to fetch anything I'd missed on my romp back to you~! The last thing I found was a little Litten-kitty, and it fell down my jaws like all the other thingies as I drug my massive weight back to you~ I was only too happy to raise up my hanging, drooling jaws and show you where the kitty - and everything else - had gone! I was VERY proud of my fetching, you know!

That was fun! But...oh! I want you to throw the stick AGAIN! Yeah, yeah! No, I'm not too heavy! Ghost-dogs can handle this sort of weight; I may be leaving a trench of rubble and dirt wherever I go, but to me, I'm light as a feather!... If, a really bloated feather! ...So YEAH! Throw the stick AGAIN! <3

Oh yeah...it's lost in my belly! D: Well don't worry! :D Pupper has an idea! You can just go in and find the stick, yeah yeah! he approaches his massive frame closer with an over-excited swing of all that bulging, wriggling weight, jaws drooling more as his wide-open snout wobbles wantingly...for you! Yeah, YEAH! I INSIST! WOOF!! <3 <3

Gosh oh gosh this was fun! It's a neat experience to commission an artist who drew you a long time ago~ This was done by CreamsicleCat, who used to go by :AnyaDServal. Years back, she drew me an awesome 5-part sequence of my Charmeleon form going to an all-you-can-eat-buffet and going crazy with the eatin'! It's been a long time since then, but I'm still very fond of that old comic, which is why I was very happy to commission her recently. ^_^ She still does awesome vore and fat-fur stuff, so I figured, why not do another 'unrestrained eating binge' scene? This, was the result. <3

I have to say I am totally a fan of this BLOATED shape. I look like a doggo-vacuum after sucking up everything in my vicinity; bit of a Kirby vibe with that! Really, it couldn't be any more fitting. <3 The detailed shading I paid for is wonderful, and the expression is just PERFECT. Am I just innocently returning to you, the viewer, after fetching, with an overexcited expression? Or does my expression - and the speed at which I am lumbering up to you - hint of a much more devious, wild intent, with me looking over you like just another snack amongst many...? ;3 Well...you can be the judge~! It's a hard expression to read and I ADORE that~ Shadoxes like to leave people guessing (until it's too late!)

Oh yeah, I colored this too! It was actually trickier than it might appear. All those individual hairs of fur and such took AGES to color over nicely, but the effect looks great in the end! I added bits of lighting here and there as well, which I think really works with the natural shading of the lines and really makes me 'pop out' a bit more. (An important thing to achieve with a body this massive!) I also attempted a background all my own, because I really suck at actual tangible backgrounds and need to practice them more. The BG looks alright here; perspective ended up just a little wonky, but I do like what I managed with the rubble-trail. It exemplifies the sheer TONNAGE of pounds I got here, and I like that I could help sell that effect. ^^

How about this realistic style too? I really dig it; Anya does toony and realistic things both very well, but I'm glad this was leaned a little bit more towards realism. (Well...massive voracious sizing aside!) It gives us an idea of what a Shadox might end up looking like in the real world, and that is pretty cool. <3

...By the way? That kitty-paw is indeed a Litten paw~ A cameo appearance from Redchu's Litten form, most likely. ;3