Just How Many CAN You Fit?... - by Flame by Charem 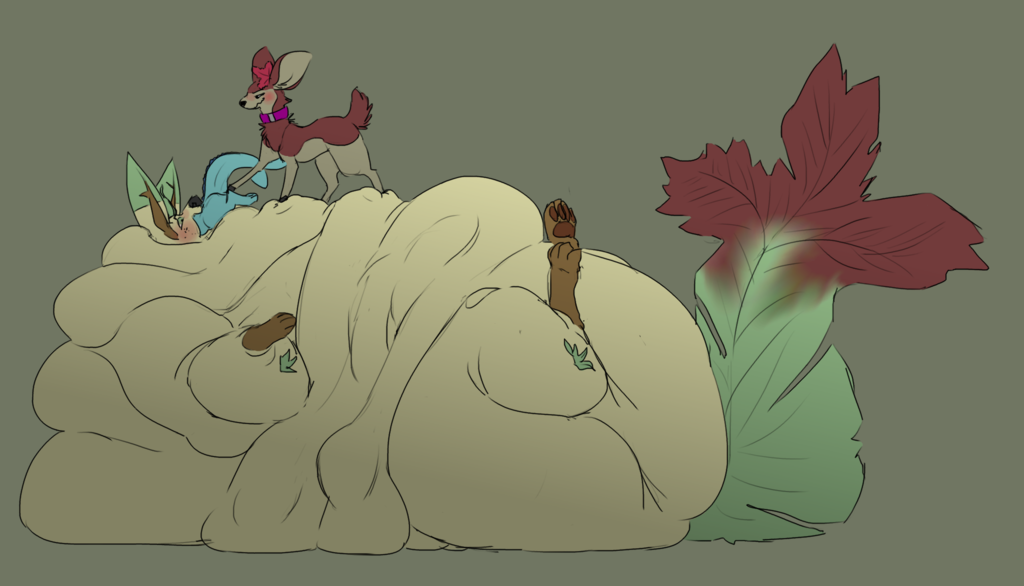 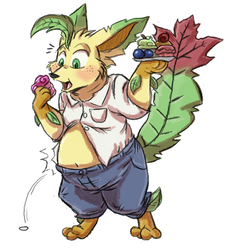 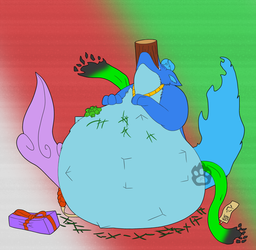 Twig was rather uncouth for a deer. The little Deerling enjoyed a host of rambunctious activities...from watching scary movies in his trainer's home, to sneaking out of said home at night to clop the streets, to picking battles with other Pokemon on a regular basis...as well as many other things. He enjoyed a sense of excitement, a rush of adrenaline; being a 'prey' animal, his senses of fear and alertness were well-defined, after all - and quite easy to tap into.

His trainer, Aspen, was a studious sort; a hiker and researcher who often went out into the wilds with Twig in tow. It gave the deer opportunities to explore and even fight if the odd aggressive Pokemon posed a threat. The diminutive deer was not one to be underestimated in a battle; most Deerlings would take a cautious approach, and thus he could surprise most predators with just how GUNG-HO he was!

Things changed a bit when his owner had a bad run-in with a certain plant, though...and was subsequently turned into a tubby 'ol Leafeon! Twig wasn't sure what to make of the situation at first, but he had a good sense of duty and was glad to help his trainer get accustomed to being a Pokemon. There was a few...bumps in the road, though. Aspen had a very odd hunger, and it could get the best of him...as the deer learned when the Leafeon tried to attack him with a predatorial gaze! Of course, Twig was able to subdue his inexperienced trainer, but the event quite angered the Deerling for a time!

...Though it also, excited him~

Twig did like a good scare, and to have somebody so close to him wanting to EAT him was...in some crazy way, really cool! He had the time to mull over it as Aspen took some alone time to fish and hunt - in a more civilized manner, with traps. But when the sun set and the tubby Leafeon didn't return to their camp, Twig grew worried, and went to check on him where the traps had been laid...only to find his belly-bloated owner snoozing off a food coma! Aspen had caught a couple wild Pokemon...and in another feral fit, devoured and digested them whole!

Learning that information only gave the Deerling a stronger, shivery rush~ In truth, he was nothing more than excited and intrigued to learn that his Pokemon'd trainer could be so...stretchy~ And so, living life on the edge, Twig proposed a test for the Leafeon...asking the fatty eeveelution to eat HIM! After some resistance, the deer got his way, aflush with slobber and fear as he slid down Aspen's gullet... It was a true test of friendship for the pair, but remarkably, that ravenous gut merely tumbled the deer around, soaking his fur with quite the mess of slobber but leaving him unscathed, and able to be safely excavated later on.

Twig would have been lying if he said he didn't adore the experience! It was scarier than watching a horror movie, yet even more fun in the end~ Of course, some interests become quite addictive if you focus on them enough; the Deerling couldn't stop marveling about Aspen's capable belly. Just what else could be stuffed in there? The deer encouraged his friend in sating those hunger pangs, even actively going out and hunting for the tubby Leafeon's sake. Twig would always have a front-row seat to watch meal after meal slide into those Leafy-jaws...or sometimes, into the Leafy's voracious bellybutton instead~

But there was never a complete sense of satisfaction for the deer. He always wanted to see Aspen eat more...and would hunt more and more Pokesnacks to achieve that goal. Aspen's hunger deflated his ability to disagree to this, and besides, he did like to see his Deerling happy...!

One particular hiking trip, however, Twig plotted something particularly-grand. He had...'obtained' (stolen) a fair number of Pokeballs from a local shop in town before the trip, without his owner knowing of course. It was true he was quadruped, and hooved, and so lacked the ability to 'throw' such things...but he'd already practiced with his mouth alone, nipping the button to prime the ball before flinging it in a designated direction. In addition he'd supplied himself a hefty saddle-bag to drape over his back and carry his supply of balls. Twig was quite giddy as he went off hunting, spending hours at a time day after day fighting and catching as many forest Pokemon as he could without entirely exhausting himself~

Soon enough, it was the final full day of this particular trip; they were slated to return to civilization the next morning. Twig, waking stealthily before his owner, hid Aspen's normal food supplies away in preparation for this planned feast... "An Ursaring must've took the food pack!" the Deerling fibbed to the Pokemon Pokemon trainer, who being good-natured easily bought the lie. "But I...caught a few Pokemon, if you're interested~" the deer continued, causing Aspen to perk his leafy tail. He certainly WAS interested.

Insisting the Leafeon simply plop comfortably back on the grass, Twig removed one ball at a time, insisting on 'pampering' his owner with a personal feeding. Neither Aspen nor his quickly-rumbling belly could disagree to a little kingly treatment, and so allowed the Deerling to send out, then promptly stuff in, each caught Pokemon. Pidgeys, Zigzagoons, Meowths, Pachirisus, and more were all eagerly shoved into the Leafeon's drooling snout, with a few even pat-patted into his soft belly-port as well. The previously-weakened Pokemon, also dazed from being freshly-called-out, only put up a token struggle at best; the Deerling's clumsy but eager hooves and those slick Leafeon throat-muscles were more than enough to vanquish each and every one of the meals!

Aspen eventually started breaking from his feeding-induced stupor as his churning belly grew more and more bulged, and the active digestion made his whole body more and more blubbery...! He finally realized just how MUCH he had consumed - and was still consuming! - when Twig became forced to scale his mountain of a gut to reach his chubby mouth. Meekly, the Leafeon attempted to state that he was probably full enough now - but Twig simply raised a brow and pretended not to catch the start of that, electing to muffle such protests with another wriggling Pokemon crammed into those salivating jaws! By the time Aspen had gulped down one meal, his devious deer had already readied his next course, leaving him little room to say much at all with his mouth so constantly full!

The Deerling wasn't 'torturing' his owner, though. The Leafeon's body language made it clear it was still enjoying being fed, even if Aspen himself was in partial disagreement~ This thrilled Twig all the more, who simply had no idea his trainer could handle THIS MUCH FOOD! It was amazing, looking at that wobbling form, listening to that belly so aggressively glurp and glorp... Oooh, it prickled the deer's fur in all the right ways~

The only real disappointment came when Twig learned he reached the final full Pokeball. This one was a special one though - saved for last. The deer opened the lid, letting a listless-looking Vaporeon free from the ball. Eeveelutions aren't terribly common to just 'run into', being more elusive creatures generally...so Twig was quite elated when he ran into this Vappy nearby a lake. It was actually rather strong as well...the Deerling only won the battle through type advantage! But he HAD won...and so had a fit, meaty creature to serve as quality food for his owner. Perfect~

It took a bit of time for the Deerling to drag the dizzied Vaporeon over and up the Leafeon's belly-mounds; it was a little bigger than Twig, after all. It gave Aspen plenty of time to realize what he would soon be fed...and he blushed bright at the thought! Sure, he had eaten many of his 'fellow Pokemon' at this point, but a fellow eeveelution...? That almost felt wrong! And yet, the slick-skinned creature looked delicious, and smelled just like a tasty fish...

Suffice to say, the Leafeon spent quite a while licking and lapping around the Vappy's hide and fins as Twig shoved it down that flabby, insatiable throat. Aspen couldn't decide between hungrily moaning and bashfully whimpering, his embaressment over how BIG he was and just WHAT he was eating very clear indeed! Twig merely grinned and let out an evil little chuckle as he smooshed his hoof against the fishy eeveelution's backside, watching the end of this buffet disappear...he knew that, ultimately, they were both VERY satisfied by this arrangement~

With Aspen's ravenous metabolism, his obese form would be reduced to something semi-mobile again in a day or two. Their hiking trip would be a bit late in ending...oh well~ Twig would protect his friend in the meantime, and in return, the Leafeon would serve as quite the comfortable pillow for the contented ungulate. Fair is fair, hm?~

Well, so much for keeping Aspen's future stories a bit shorter. chuckles

This wonderful picture was done by my equally-wonderful friend [url=https://twitter.com/voidflame]Flame[/url]! Starring my human-turned-Leafeon fella Aspen and his pet Deerling Twig! url=https://www.sofurry.com/browse/folder/stories?by=32663&folder=53296[/url]

I was debating whether this picture should be considered canon for Aspen and Twig's storyline...and ultimately I decided yes, it is. Twig is an energetic dear that lives for life's thrills; in a different life he'd totally do extreme sports or something! So it's really not too surprising for him to wonder how much food he can stuff his Master's very-ravenous gut~ His prey-senses go off the charts when he watches that Leafeon predator eat, and the deer truly loves the feeling! Aspen might have mixed feelings about all this - his pet is totally embarrassing him! - but he can't help but love it too~

In truth, Twig's extreme fascination in vore may result in him trying it himself...at some point. ;3 I secretly wrote in the possibility into chapter 2 of their origin story; he was in fur/skin contact with the sap that caused all these hunger pangs in Aspen when he was in Aspen's belly, and it's quite possible this will have some similar effect on the herbivore in due time...

Anyways, it's really nice to get a picture of Twig in the flesh! This is so far his only reference, and my gosh did Flame draw him well. He looks a little more punk-ish than a normal Deerling, a little less cute; and that's totally the point. He ain't no graceful deer~ I asked for particular details (leaf, color scheme) and Flame delivered it all perfectly. ^_^ Not to mention, what a cute obese mound of fur and fat that Leafeon is! Flame's always so great with fatties, and this is no exception~

[color=#d4aa00][b]I have a question for you all though! What do you think of deer/Deerlings? Would you like to see more art of Twig?[/color][/b] I am curious as to what others think of the rambunctious ungulate~